A sample of the questions I've received since joining Tinder in August: "Would you rather fight 100 duck-sized horses or one horse-sized duck?" "If you could have any super power, what would you pick and why?" "So, when are we banging?"

If you use Tinder, chances are your inbox has been similarly flooded with random questions. Since guys seem to have no qualms about their question-asking, I decided to get straight to the point and ask my potential matches a question that very much matters to me: "Do you consider yourself a feminist? Why/why not?"

Admittedly, I didn't have the highest hopes about the random men of the Internet. (I mean, have you seen the Straight White Boys Texting Tumblr? And don't get me started on that #WomenAgainstFeminism movement.)

The experiment: Initially, I only asked the question to guys I'd already been matched with on the app. But then, I decided to truly put my experiment to the test and swipe right on everyone. I figured it'd be a fresh slate, but jeez, it was overwhelming! I made the mistake of swiping through at least 50 guys in a row (so quickly that their photos didn't even have a chance to load) and all of a sudden, the red-orange dots began popping up in my messages like chicken pox. 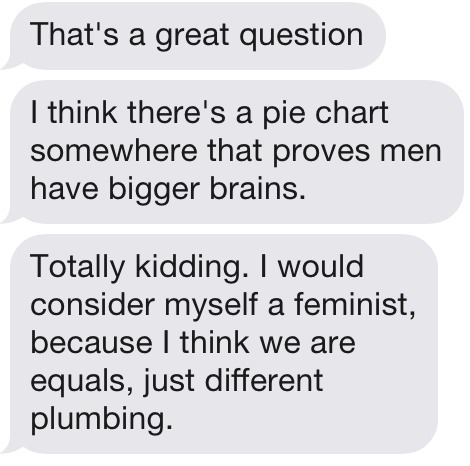 Most guys called it an "interesting" or "random" question, but I appreciate this guy saying it's a great one.

Well, that pretty much answers the question. 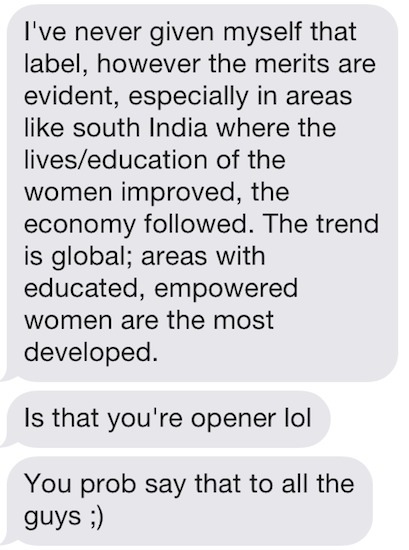 To answer his question, yes... I have been saying it to all the guys.

SWEATPANTS, HAIR-TIED. CHILLIN' WITH NO MAKE-UP ON. 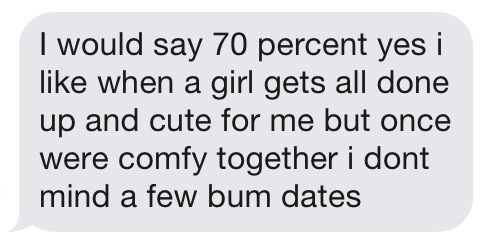 Oh God. So many wrong things. 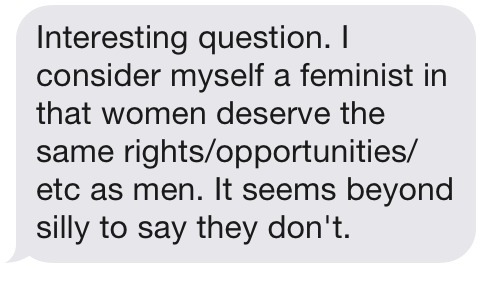 Silly rabbit. Equal rights are for everybody. 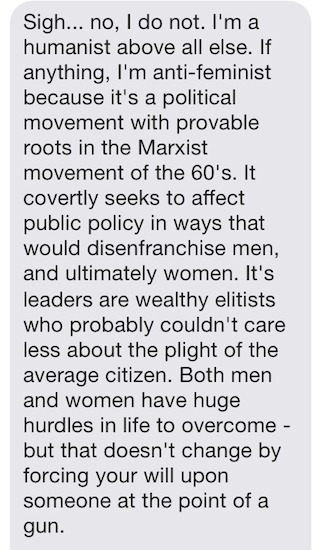 Huh? This continued into an even longer rant about how guys experience mistreatment too, like losing divorce settlements, or being "horrifically circumcised at birth." But I'll spare you from reading that.

EQUALITY & JUSTICE FOR ALL 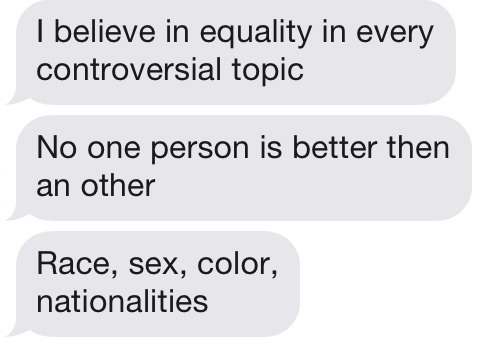 No complaints here except that it's sad this is still a "controversial" topic. 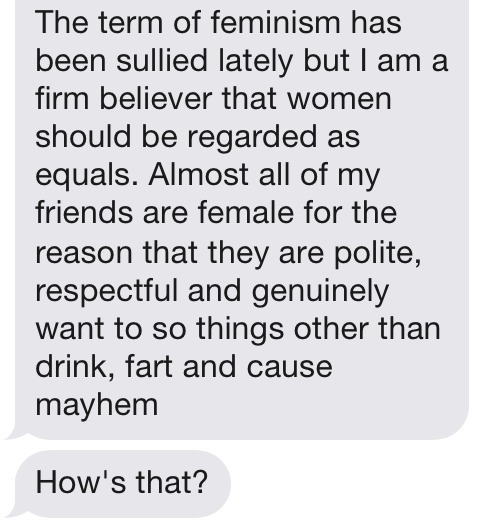 Well, women might want to "drink, fart and cause mayhem" too.

Wait, is this the pot calling the kettle black, or... ? 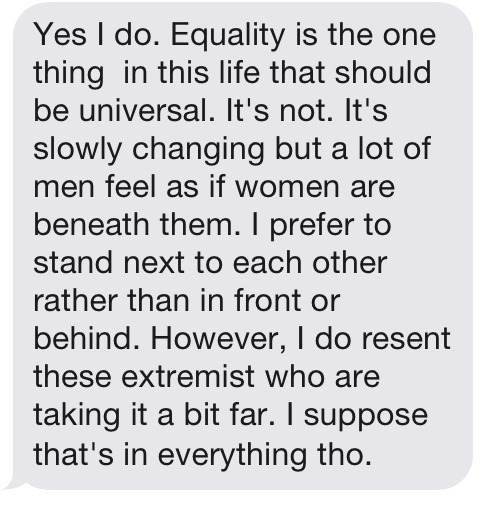 Is he referring to Taylor Swift? 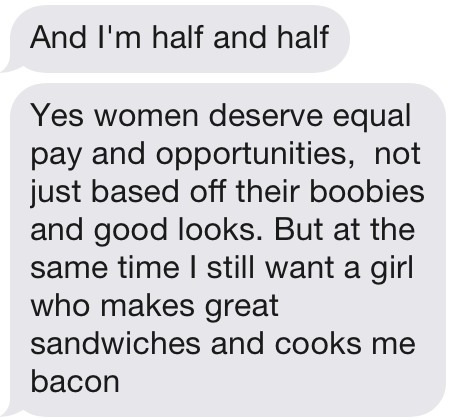 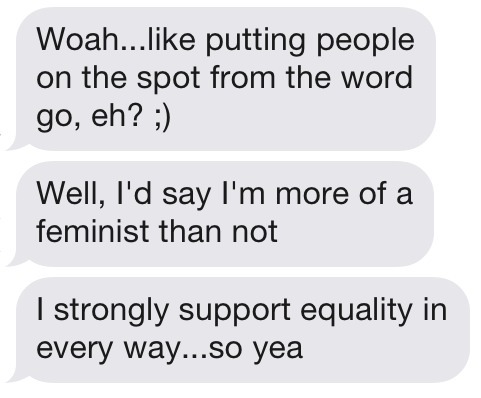 More of a feminist than not? Is that like being a fan of Lost? 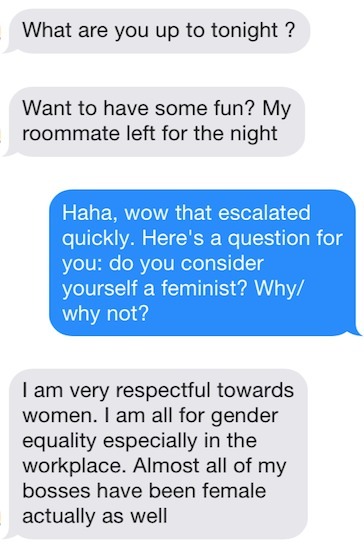 IDK, you guys. I think I'm getting mixed signals.

SO SIMPLE, A CAVEMAN COULD UNDERSTAND 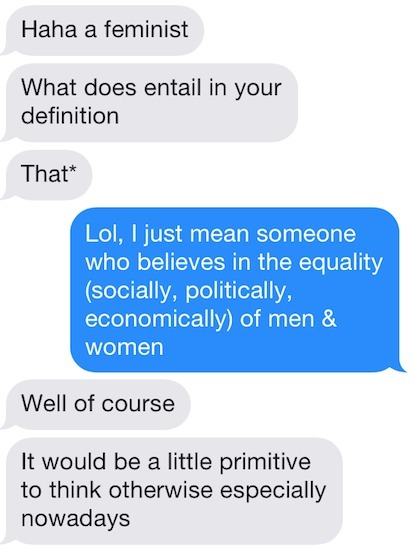 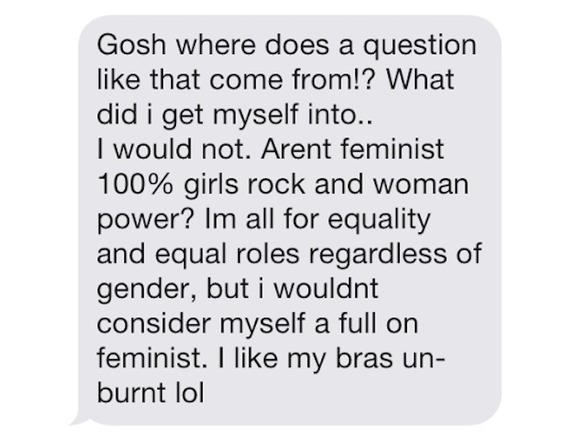 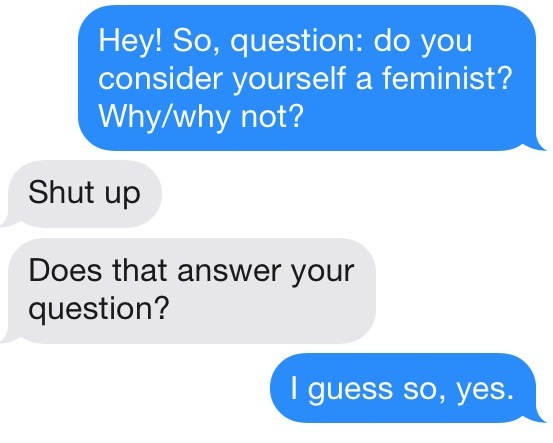 This one speaks for itself. Perhaps I should have lectured him, but I didn't feel like spending the energy. 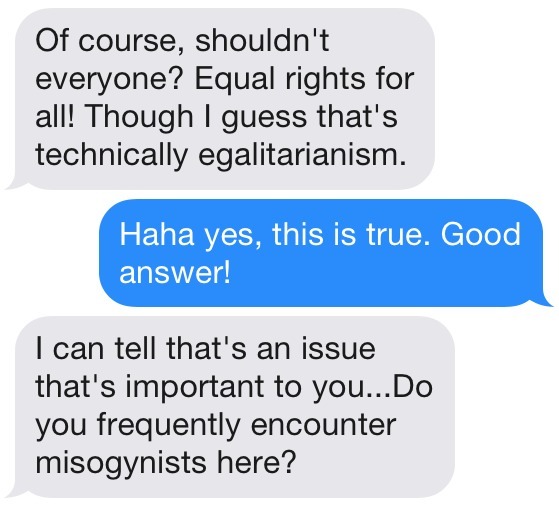 As if his first response wasn't great enough, he asked about misogynists. I just wanted to give him a big hug through my phone screen.

Conclusion: For the most part, I was pleasantly surprised. Yes, many of these answers were horrible and ignorant, but a majority of the guys I talked to at least attempted thoughtful responses. I definitely didn't expect that, mostly because of Tinder's reputation. While there is plenty of sexism out there, it turns out not all Tinder males are scummy jerks. In fact, it seems that many men on Tinder even fancy themselves feminists.

Perhaps more troubling was the reoccurring theme that many men seem to believe in feminism, but are still uncomfortable using the label. Why are these guys still hedging their bets on the F-word?

Either way, this much is for sure: I will only be swiping right on men who are down with equal rights from now on.