When it comes to dining choices, humans aren't nearly adventurous enough. Aside from items that are objectively poisonous (you know, like actual poison), we can pretty much eat any food placed in front of us. This is something we seriously take for granted. Take our canine companions, for example. There's a detailed list of normal, everyday foods dogs can and can't eat. And it's a veritable minefield: something as simple as chocolate can send them directly to the animal E.R. without passing "go."

People don't face these culinary challenges. And yet many of us still stick to the same small number of dishes, year in and year out. Even ever-so-slightly exotic meals can make us cower. But sometimes, all it takes is one tiny act of bravery to get the ball rolling.

Like most of you, the first time I had sushi was at the Sawgrass Mills Outlet Mall in South Florida. Nestled up against the Everglades, it's one of the largest shopping plazas in the U.S., covering nearly two-and-a-half million square feet. Although this amount of retail space makes for a menacing-sized building, what's arguably more menacing is the fact it's kinda shaped like a giant freaking alligator. 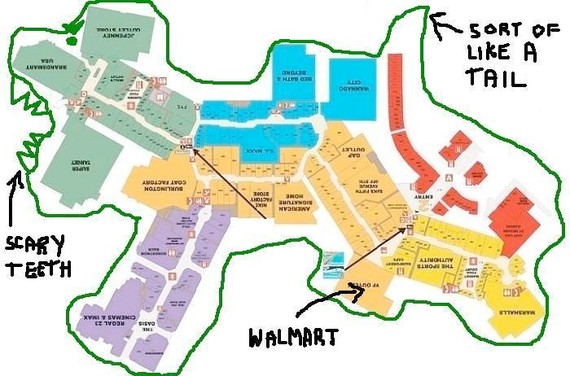 I'll concede that having entered the belly of this beast doesn't necessarily make me braver than the national average (it does). But it certainly shines light on the fact the Florida Everglades are daunting, mysterious, and not for the faint of heart. Whether you're waist-deep in swampland or warding off deadly sub-tropical predators, you're entering the geographic abyss, not unlike Magellan, Cortez, or those actual guys from The Abyss.

So yes, perhaps my "dashing adventurousness" (your words, not mine) in this region puts me in an elite class of super-explorer; one that prohibits me from knowing the meaning of the word 'danger.' (Or the spelling, making me a potential Scrabble liability.)

However, my bravery that day had little to do with my proximity to man-eating reptiles and everything to do with the fact I was tackling my inaugural spicy salmon tempura roll. Yes, it took me 23 years of life to try my first taste of sushi. And despite it being a puzzling, unfamiliar experience, I was immediately, 100% hooked. In the twenty years that have since passed, I've sushied it up an average of once to twice a week.

Amazingly, this sliver of Florida adventuring convinced me to open up to uncharted food territories. And what a revelation it's been. Since that fateful day, I've dined on snake in Thailand. Snails in Paris. Gefilte fish in Israel. Heck, even Lingonberries at a suburban Toronto Ikea. (Note: Allen key required.)

So yes, exploring dishes outside our comfort zone is a form of adventuring -- and a valid one at that. And we're all in the position to strap on our Indiana Jones bullwhips and give it a try. Not unlike scaling Kilimanjaro or rasslin' with gators in a Florida marsh, there's an adrenaline-pumping thrill that comes from expanding our food horizons.

Put another way, don't be chicken to try something other than chicken. Now if you'll excuse me, there are some mocha-covered tree termites in desperate need of my attention.

Weird Food: The Most Dangerous Foods You Can Eat
More:
Steven Shehori diningAdventureFlorida sushi
Newsletter Sign Up
An essential daily guide to achieving the good life
Subscribe to our lifestyle email.
Successfully Subscribed!
Realness delivered to your inbox