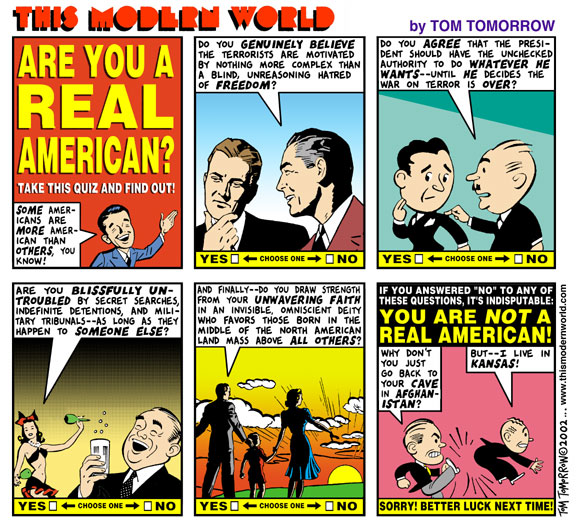 There's nothing new about Republicans claiming that a significant portion of their fellow citizens are somehow not "real" Americans. It was a familiar refrain when this cartoon ran in 2002 (earning me a denunciation as a sneering elitist from noted populist Ann Coulter, who I believe has a homestead out on the prairie somewhere). But this sort of talk is generally left to the Limbaughs and Hannitys, the front line combatants in this ideological war conservatives have declared on the rest of us. This year, we've got candidates for high office adopting the routine, openly declaring that those of us who do not live in small towns or rural areas are not "real" citizens. That's 80% of the country's population, according to the last U.S. Census.

Tom Tomorrow's newest full color compilation, The Future's so Bright, I Can't Bear to Look, has just been released from Nation Books.