So, I have a bone to pick. A pet peeve to vent about. A wrong to set right. It's about it being "easy."

So here's what I see a lot. People want it to be easier. You're tired of working hard. You feel other people have it easier and so it should be easier for you. 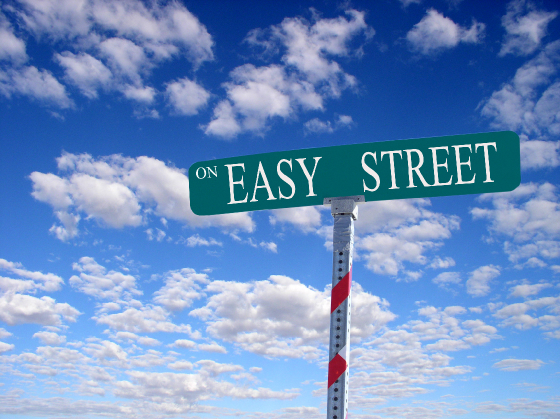 I get it. I really do. This is a tough economy. My business, the entertainment industry is tough. It's changing. It's contracting. There's runaway production. The whole world wants to be in the movie business and it seems like they all come to LA.

And we look at our friends and some of them have it easier. They have a great agent who gets them good auditions. They have a rich uncle and he gives them money for their film. They have a mom who works at a studio and so they get a job. The grass is always greener.

Being the mother of four year old twins has given me a new perspective on this idea of "easy." Here's something that I've learned from my girls.

There are all these things that we take for granted as we get older that, it turns out, were anything but easy. There's something called "sleep training" because infants are not born knowing how to sleep through the night. You actually have to train your child to sleep properly.

And let's not get into potty training and how long that takes. My girls took months and months to learn how to use the potty. No joke. Turns out it's really hard to stop using a diaper and start using a toilet.

I've never heard an Olympic athlete say it was easy. Never. If you want to be the best in the world at something, it will take an extraordinary amount of hard work.

And it turns out that most things in life that are worthwhile take hard work. Sometimes lots and lots of hard work.

I'm not saying you should be inefficient or stupid. I do think that working smarter is very important, because you want to minimize wasted time, resources and effort.

But, I do see that if we just embraced the fact that many things we want in our lives and our careers really take a lot of hard work, we'd enjoy the process so much more. Stop resisting the hard work and embrace it. Chances are that your friend who has it "easier" is working her toosh off and would tell you so if you asked.

And it doesn't matter in the end. Run your own race. Work hard toward your dreams. And while you're doing so replace some of that comparing and complaining with gratitude that you get to run your own race--that if you're reading this blog you're likely fortunate enough to live in a place where you can run your own race. It will make the journey so much sweeter.

Shawn Tolleson is a director, writer, career coach and mother of four-year old twin girls. You can read more blogs at www.entertainmentcareerstrategy.com and learn about her upcoming feature film Saturn Returns at www.saturnreturns.net. She tweets @shawntolleson.