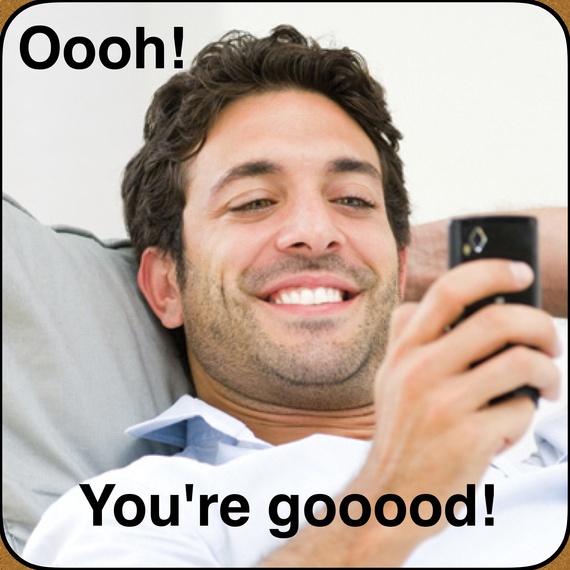 "It was nice meeting you last night."

"Stop making me think about you. I'm busy."

The first one shows you have the personality of a parking meter. The second one gives him the impression you're sexy and funny.

Texting reveals your personality. It's a digital first impression after the first meeting. Texting is also testing. Text a guy you don't know well and he immediately lapses into test questions: Does he like me or does he just want to be friends? Do I want to date him or sleep with him? What are his intentions? Is he funny, boring, interesting? Is he a player? Is he relationship material? Is this someone I'd want to go out with? Is he a stalker? A Stage Five Clinger?

Of course, it isn't you he's testing; it's your typing. Do your texts make him laugh or reach for the Rolaids? You are constantly being assessed by the content of your texts (just as you're assessing his). In fact, your texts are pretty much your defining characteristic until you talk on the phone or hang out somewhere real.

This places a huge burden on you to 'produce' good texts. He can't see, hear, smell or feel you at the moment, so your texts are the digital equivalent of looking at your face and body and experiencing your personality. Do not kid yourself--your entire existence is being judged by what and how you text.

Used incorrectly, texts can toss a promising romance into the garbage disposal and flick the switch on your hopes and dreams. Used correctly, flirty text messages can get you the love of your life or, at the very least, some serious action. Want to turn him off? Send an inappropriate text. Or a misspelled one. Or worse, an inappropriate text that's misspelled. Want him walking backwards from you? Be too direct. Want him wishing he could "text block" you? Go emo. Want him filing a restraining order? Text him nine times in a row without getting a response from him.

One of the best ways of doing that is to have a list of go-to texts that'll put a smile on his face. Here are a couple of examples:

✦ Last night I renamed my iPod 'The Titanic' so when I plug it in it says '"The Titanic is Syncing."

✦ On CSI, they found semen in the woman's ear. Guess she heard her killer coming.

Click here to see the rest of my 20 Texts That'll Make Him Bend Over (With Laughter).

There's an old Irish saying that if you make a girl laugh you're halfway up her leg. It applies to men, too. So start texting something funny. You're nowhere near his leg.

The author's latest book is The Guide To Gay Texts: How To Make Guys Obsess Over You.