It's an issue that influences life, sex and relationships - that we live in a culture that often celebrates the false and shuns real humanity.

Are we becoming more critical and knowing in regard to our cultural attraction to the unreal or are we just becoming more unquestioningly accepting of fake as desirable? 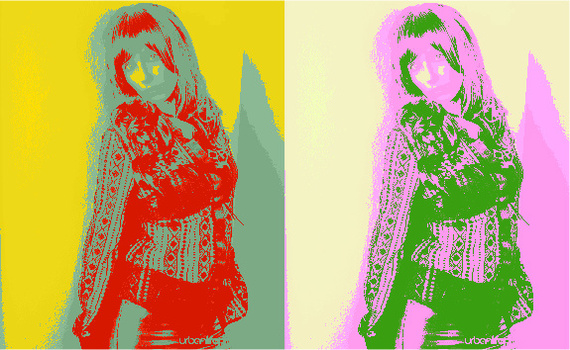 As a couple therapist I've often been confronted with the pain caused by sexual, romantic and relationship expectations that we impose on real relationships, real sex and real bodies, straight out the impossibly 'perfect' realm.

What is the worship of plastic bods, celebrity lives and everything unreality all about at the core? Why do we so love illusion? Why is fake so damn alluring?

Have you ever found yourself expecting your life, your relationship, your body to emulate images presented on film or the interwebs - even though you KNOW so much of what you're being presented with is not REAL and not even attainable?

Here's what David Duchovny had to say about celebrity worship and how the camera sucks us in, way back in the 1990's when he was super huge in The X Files:

"Being photographed gives you a certain energy in other people's eyes, a certain buzz. I'm the focus of millions of eyes every Friday night on American TV because the camera is photographing me".

"That changes the way people see me, but it has nothing to do with me. My celebrity is a function of an optical instrument and it creates the illusion that I am somehow greater or more compelling than your own life. But that's a fallacy, and it's self-deluding to think that your existence has any particular value outside of your own relationships". (Go Dave, right?!!)

"Maybe my work has some artistic merit, maybe not. But celebrity has nothing to do with the intrinsic value of the artist or her art. That was the whole point of Warhol."

It's no coincidence that Warhol's my favourite artist. Although my admiration of the late Andy is actually more about his reflections on the crazy power of celebrity in our culture and his reported intense work ethic, not just his art.

Do we need a second coming of Warhol, flawed as he may have been, to remind us to deeply question the power of images around us, to stay real and keep relationships and sex real so we don't forget what matters? Can we focus on being the hero of our own lives, rather than giving that power to those who pose hardest?

What am I going to do, and what are YOU going to do today, to be the hero of your own life, someone you'd look up to?

Need some help to rise and create the relationship of your dreams, get some help here.

Just BE the love that you ARE.

Psychologist and author at www.drdebracampbell.com