It's about time we did the math -- How many households and small businesses have the potential of being shut off or abandoned by Verizon and AT&T? How many will be forced to use Verizon's Wireless services, even when they are not a substitute? How many copper lines are in service today in America today?

But the vision that I have is we are going into the copper plant areas and every place we have FiOS, we are going to kill the copper. We are going to just take it out of service and we are going to move those services onto FiOS. We have got parallel networks in way too many places now, so that is a pot of gold in my view.

And then in other areas that are more rural and more sparsely populated, we have got LTE built that will handle all of those services and so we are going to cut the copper off there. We are going to do it over wireless. So I am going to be really shrinking the amount of copper we have out there...

As we outlined, Verizon has already started to dump customers. In Fire Island, New York and parts of New Jersey Verizon refused to repair customers' wires that were out of service because of Sandy and has forced them onto Voice Link, a 1990's styled cell phone-like service that can't handle basic data services, from alarm circuits to dial-up Internet service.

And in our previous article we outlined how the statistics being promulgated by the phone companies, media and even the FCC , including the often quoted 'wireless only' numbers, have serious flaws and are biased toward the phone companies' plans to close down the phone networks.

But the rest of the numbers we compiled are equally as ugly. Regardless of what the companies say, using their own data, we found: 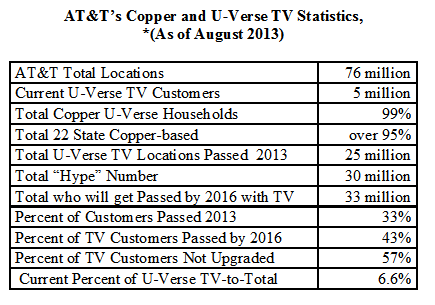 Oh, but Verizon is any better? Nah. 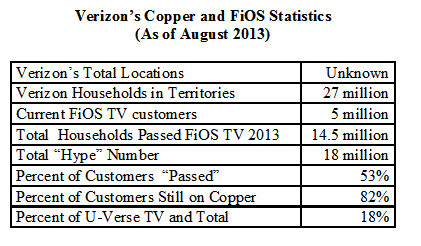 NOTE: These companies have mashed together different terms that can include 'households, 'small businesses', or the term "locations" as opposed to 'households-only'.We're using the "TV" capability because it represents "ALL' applications that can come over a wire, not some subset such as 'DSL only 'or broadband only, or worse "Wireless replacement" only. Also, much of the 'new U-Verse" customers are actually DSL customers being migrated and not new customers. And we can't discuss all of the fiber in the networks as neither Verizon nor AT&T publish any statistics about it.

As we will show, the numbers promulgated by the companies are usually 'households passed' or 'locations' passed -- a chest-beating exercise to outline the 'footprint' of a service instead of actual homes that have been wired with the service and are in use. A 'footprint' is the areas where the company may eventually upgrade the homes, but the wiring can be down the block or blocks away.

Verizon claims (in various places) it has 18 million FiOS TV households, but in reality this is only households 'passed", not wired and the company only has 5 million that are using the TV service-- so all the rest of the households in that 'footprint' are still on copper wiring. i.e., the majority.

Let's Go Through the Details.

AT&T is 99 Percent Copper to the Home, Fiber to the Press Release

To start, 99 percent of U-Verse's TV households (or broadband) are still using the old, copper utility wiring that was in place for decades. (It could be 90 percent or 100 percent of residential U-Verse customers; there has been no audits that were made public.) AT&T has bended this fact as we outlined, claiming that U-Verse is a fiber optic-based service when in reality it is fiber-to-the-press-release. The wire that connects the house is the old, Public Switched Telephone Networks (PSTN) copper wire that is part of the state-based utility. It is not fiber. AT&T has no announced residential fiber optic plans.

But the number of homes that are part of the 'upgraded' territories vs those where the company is planning on pushing customers onto wireless has also been manipulated. Let's go through their own statements.

As of first quarter 2013, AT&T claimed 4.8 million U-Verse TV locations, representing 19 percent of the eligible locations. (Note. In the second quarter they are hit 5 million.)

This means that AT&T has about 25 million "locations" potentially covered for TV. Yet, AT&T has been telling people they were going to have 30 million.

In 2012, in order to get the FCC to pass its petition to 'transition', read close down the 'public switched telephone networks', AT&T claimed that there were 76 million total locations and that by 2016, 75 percent will have broadband and 33 million customer locations will have a TV option. (Note: 57 million is 75 percent of 76 million locations.)

Based on their own data, about 33 percent of AT&T's current customers are upgraded and can get U-Verse TV today while less than 7 percent actually have U-Verse TV. But most disturbing, after 3 years, the total number of U-Verse TV locations passed will only be 43 percent of the AT&T territories. (33 million customers out of 76 million total locations).

All of the other numbers given are hype and as we've seen, there is no evidence to believe the company will actually expand the service 'footprint'.

Sean Lev, FCC General Counsel, says that everything is moving from copper to fiber and he quotes Verizon's statistics.

"Copper networks are being replaced by fiber. As an illustration, recent Verizon investor relations statements indicate that it replaced 233,000 of its copper loops with fiber last year and expects to replace another 300,000 this year."

Sean Lev is now the head of the FCC's Transition Task Force, which is pushing to close down the networks and didn't bother to mention AT&T, the largest US incumbent, is not replacing the fiber - in 22 states.

Moreover, while Verizon's approach has been different and they decided to upgrade some of the networks to fiber, in 2010, Verizon announced that it was halting any expansion of its fiber-based networks footprint. I guess FCC Counsel Lev hasn't read any of the articles over the last 3 years about Verizon's stoppage of network upgrades.

How much of Verizon is actually wired and how many customers are on FiOS? As of August 2013, FiOS has only 5 million TV customers and while the media keeps parroting the original numbers by Verizon that they would have 18 million households passed, it appears that the deployment is closer to 14-15 million currently.

"We have continued to grow our subscriber base and consistently improved penetration rates within our FiOS service areas during 2012. Also contributing to the increase in revenue from FiOS services were changes in our pricing strategy adopted in 2012. As of December 31, 2012, we achieved penetration rates of 37.3 percent and 33.3 percent for FiOS Internet and FiOS Video..."

If 33.3 percent of households passed represents 4.7 million customers, then the total coverage at the end of 2012 was only 14 .2 million TV households PASSED, not wired. And the Internet service was only available to 14.7 million.

This means that Verizon has misled the public in a few thousand statements as they keep telling everyone that they have 18 million households. -- or at least they don't bother to correct the reporters.

But here's the rub--while it is almost impossible to find Verizon's exact number of households or businesses or 'locations' as the company has been dumping rural properties over the last decade - including Maine, New Hampshire, Vermont and Hawaii, (they really 'care' about their rural customers), it would appear that Verizon's footprint has about 27 million households, but it could be higher.

This then means that 47 percent of customers are not in a service area for FiOS. Moreover, this also means that Verizon's lines are still mostly copper -- about 82 percent in the Verizon footprint, as the company only has 5 million customers out of 27 million households -- it is probably higher as businesses are not included.

A Land Line Is a Fiber Optic Service You Never Got - But Paid for.

AT&T and Verizon state-based utilities, in most cases, should have already been upgraded --- and with fiber.

The "landline" is actually the utility wire that was, in both of these cases, supposed to have been replaced with a fiber optic wire. AT&T and Verizon both had obligations to do these upgrades in almost every state. In fact, in many states, the companies got multiple rate increases and tax perks to pay for this construction.

AT&T pulled a massive bait-and-switch and so everyone who is in an AT&T state -- and you are not even upgraded to U-Verse -- you might want to ask what happened to that fiber optic wire--and all the money you paid.

And Verizon? While the company did some upgrades--if you are in New Jersey or other states where the laws were changed, like Pennsylvania - you, too, might want to ask why they are planning on offering you inferior wireless services instead of upgrading the wires.

About half of the US is now in danger of being turned off as they are not in the footprint of the proposed or existing upgraded territories or they are but they 'haven't gotten to them yet'. As we have been documenting in other places, a customer can get a notice that they are declining to fix the wires if they break from a storm or simply shut them off--even if you paid your bills.

How many customers do the companies claim are going to be forced onto wireless or not upgraded? I leave you with AT&T's accounting based on their FCC IP transition filing:

This is the best case as AT&T may never expand past their current footprint with U-Verse and this quote is about services that may be available 3 years from now -- in 2016.