I've always been afraid of heights. Growing up in the suburbs of Chicago, I was raised with the Midwest's signature down-to-earth mentality, a figurative sentiment that evolved into a literal preference once I moved to the vertical expanse of New York City. I've never been to the top of the Empire State Building; watching professional window washers makes me dizzy; and I've lived in ground floor apartments for the past five years. 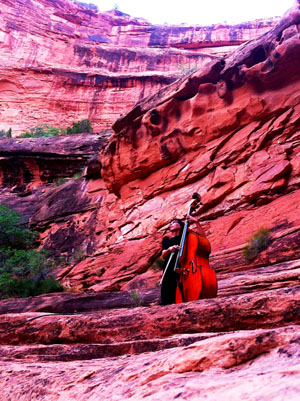 So when I recently found myself perched on a blazing red cliff hundreds of feet in the air, I was astounded. I had just free-climbed a colossal concave in the desert of Utah, pulling a four-limbed-crawl move that would make Linda Blair proud. Upon reaching the brink above tree level and realizing my altitude, I immediately thought: Am I crazy?

But I wasn't crazy -- I was just possessed.

To create Possessed, Robert amassed a team of videographers (Gabe Gomez + Julien Melendez, aka Crooked Letter Films), audio engineer (Joel Gordon), visual artist + photographer (Elliott Fredouelle), and communications manager (yours truly), and journeyed into the canyons, cliffs, and culverts of Moab to record throughout the days and nights of late August.

Here is the inside scoop from Robert:

I grew up in Arvada, Colorado (a suburb of Denver). As kids, we took family vacations to the National Parks in the West (Grand Canyon, Zion, Bryce), so early on I had unknowingly formed a connection to these landscapes. Many years passed before I began to feel a strong pull to go back. About that time (1993), Michael Barrett and Leslie Tomkins invited me to a chamber music festival they were starting in Moab, Utah. It was perfect - playing chamber music and returning to the wide-open American West.

Hiking around during the first years of the Moab Music Festival, the landscape began to have a profound effect on me. I loved the look and feel, but I really loved the sound - the quiet stillness, the canyon echoes, the singing of the birds or buzzing of the insects, the sound of the streams, wind, stars and moon.

One day a newly made friend, Colin Stoye, invited me to bring my bass to a drum circle that night in a culvert outside of town. I tepidly made my way into the culvert and soon experienced a kind of musical freedom and release, a deep awakening that I hadn't felt before. Over the next few visits to the Festival, the spirit of the culvert merged with the sound of the landscape. I knew I would eventually record that music and freedom. 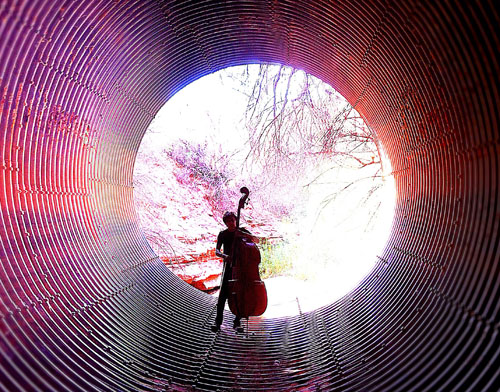 How did you choose the varied multimedia album components?

When I first approached Cantaloupe Records, I was thinking of a DVD to capture the overwhelming beauty of Moab, paired with an audio track of my bass improvisations interacting with the landscape and a photo-documentation booklet of the process. However, after assembling my creative team, and talking with Bill Murphy at Cantaloupe Records, the current triptych nature of the project really came into focus.

I wanted each part of Possessed to be its own artistic expression, not a 'concert' video with an accompanying book of photos. The artist, Elliott Fredouelle, will be making an art piece (in print form), and videographers Gabriel Gomez and Julien Melendez (Crooked Letter Films) will be making an art DVD. These pieces will be expressions of their own experience with the landscape and my improvisations. Elliott, Julien and Gabriel are young artists with fresh eyes, new perspectives, and innovative approaches. I want to turn them lose and let them do what they do.

At the same time, I'm incredibly lucky to be working with the brilliant and extremely experienced sound engineer Joel Gordon. I've worked with Joel on several other projects so he knows my playing, bass, and sound. His recordings are gorgeous. Wow, I'm working with 4 super talented artists.

Since acoustic interactivity is a central project force, how did you decide where to play what musical material? How did each recording location speak to you?

Our guide and my good friend, Conrad Sorensen, took us to beautiful places that had interesting, lovely acoustics. Conrad has lived in Moab for almost 40 years: He is a spiritual person with a close connection to the landscape. We've also improvised together and share that bond.

As we approached each location, I had butterflies in my stomach because I didn't have any idea what I would play. While everyone was setting up the cameras and recording equipment, I played bass, listening to the space and trying to make myself empty. I discovered what seemed to make sense in that space, what 'sounded.' I made mental notes and when it came time to record, those mental notes started me off in a particular direction and I followed wherever it led me.

The entire process was very mysterious. With very little pre-thought, I would just start -- my hands would move and music would come out. I really don't know where it came from, but I felt that I was being guided by where I was.

Did you have any favorite locations?

No, each place was special. The acoustics were varied -- richly reverberant, warmly close, fascinatingly echo-y. In some locations the wind was an added special presence or the birds and insects made a welcome addition. The light was also a major contributor, from the gentle early dawn to the washed-out-middle-of-the-day glare to the mysterious and magical twilight. Everywhere we were, there was a highly evocative blend of plant and animal life, environmental conditions and ancient geological "architecture." And then there was Larry, our favorite lizard that we met at the first location in Hunter Canyon. Larry made that particular place special.

What was the most difficult element of filming and recording?

Being outdoors posed unique challenges and some interesting preparations took place before going to Moab. I had a shorter sound post placed inside my bass to acclimatize the instrument to the hot, dry conditions that it would encounter, and I bought a bass case that has backpack-style shoulder straps so I could hike with the bass on my back, leaving my hands free to help me scamper over the rocks. I even practiced 'hiking' with the bass in my yard in Connecticut.

Once we arrived on location, there was a lot of experimentation to find the best place to play: we were all singing and clapping while we listened to the acoustics, searching for the ideal spot. Finding the right microphone placement was a time consuming process requiring a lot of trial and error, but Joel's experienced expertise was crucial in turning what could have been an arduous process into something quite manageable. (I remember one location where the mics were nearly 75 feet away from me!)

Of course, we had noise issues to deal with, like the sound of planes or cars which we would just have to wait out. Another time, there was a group of campers from Spain near our recording location who graciously consented to remain silent during the recording session (for nearly two hours -- thank you very much, gentlemen).

Gabe and Julien had their set of challenges too; two were trying to avoid filming microphones or making camera noise. This was also a challenge for Elliott, as the sound of drawing on paper was audible to Joel's sensitive microphones. We had a lot stuff to carry -- my bass, all of the recording, camera, and video equipment, drawing materials, drinking water and snacks.

I remember the first morning -- we wanted to start filming at sunrise so we left our rental house at 4:00 a.m. and hiked in the darkness with headlamps and flashlights. As we we're hiking, I was thinking how crazy this was -- being in the dark, carrying tens of thousand of dollars worth of equipment and instruments, not even sure how or IF it would all work out. But those first few notes, the first few frames, the first few sketches, were magic and I knew we were on to something.

How are you approaching the next phase of production, editing dozens of hours of material into a finished product?

The process of assembling the final product will be time-consuming as there is a lot of material to review. I generated six to seven hours of music and there is twice that much video of me since we we're recording with two cameras. Gabe and Julien also shot many hours of video that doesn't include me, and there are a huge number of photos that you and Elliott shot, plus a large amount of iPhone video.

So now this huge collection of music and images has to be carefully looked at and listened to in order to pull out the quality material. After that, we'll decide what goes on the CD, what goes on the DVD, and what is appropriate for the art book. I think the material will direct the process, just as the landscapes in Moab directed my improvisations.