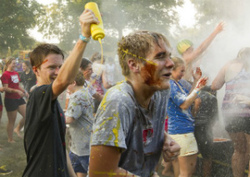 This week's test from the Lester & Charlie Institute of Forward Thinking!

It wasn't that long ago that we brought you the shocker story from Alabama that school officials there put a 5-year-old girl on suicide and homicide watch after she pointed her crayon at another student and made a small gun noise. Alabama schools want you to be sure that your kids are safe!

But it's not just 5-year-old girls armed with deadly crayons that Alabama schools are worried about. A middle school principal in Valley, Alabama must have finally figured out how to get that darn search button in Google News to work, because now she's worried about real school shooters -- the ones armed not with crayons, but real guns.

If you're one of those millions of Americans married to the NRA, you're probably terrified that we're going to tell you that Alabama is threatening to make like Obama and wrest guns away from the lunatics clinging to their Constitutional right to shoot up schools. Nothing doing. This principal in Alabama simply wants the children to be prepared to defend themselves -- with cans of corn and peas ready to hurl at possible intruders!

Yes, really. The principal of Alabama's W.F. Burns Middle School has asked parents to send each of their kids to school with an 8-ounce canned item -- to throw at the heads of any intruders. "If somebody is going to force their way through," she said, "then as the last resort you would start throwing any objects you could get your hands on." Such as cans of corn and peas. Which, she thoughtfully pointed out, could be donated to a food pantry in the event they were never used in self-defense. "We hope the canned food items will never be used or needed," she said, "but it is best to be prepared." With cans of corn and peas.

This seems an odd way to prepare. The threat of school shootings is all too real, but giving kids cans of peas and corn to hurl in self-defense is just...bizarre. We do realize, of course, that we're talking about Alabama here -- the state where a local representative recently tried to twist history lessons into an way to get kids to pray in school. And Southern Red States have a strange track record when it comes to preparing our kids for anything, be it Louisiana schools teaching "Bible-based math" or Mississippi's "purity preservation exercises" that say a girl who has sex is no better than a used piece of chocolate.

But, even so, this seems a special kind of insane. Telling kids to stockpile cans of corn and peas to fend off armed intruders sounds really, really crazy. Yet we probably shouldn't have been surprised to learn that this plan is popular with Alabama parents, who, though the proposal has caused "a stir," have so far reacted positively. If we can't teach our kids anything useful, at least we can give them cans of corn and peas to throw at people.

In fact, the response has been so positive that it's inspired Alabamans to figure out how to use this same way of thinking to come up with ways to defend against other terrifying evils facing schools today. The Alabama State School Board has already sent out a questionnaire to teachers all over the state -- to assess how prepared they are for all kinds of emergencies.

We have the questionnaire -- the actual questionnaire that is right now being sent to every teacher in Alabama. You can take it here. Teachers and students in Alabama are not going to be taken by surprise. Neither should you! Would YOU know the best way to respond to an emergency in Alabama? Take the quiz and find out!

"Are You Prepared for Alabama's School Safety Plan?"