Have you ever found yourself pretending to be someone you're not in front of someone you wanted to impress, only to have it backfire on you in the end? 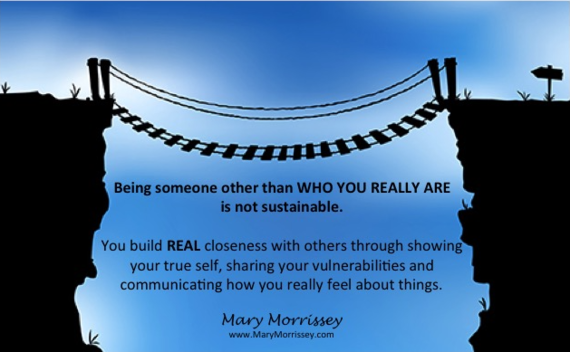 So often, we pretend to be someone we're not around people whose approval we crave, instead of being authentic.

We may stifle our true feelings, and not express ourselves fully, in order to gain love, respect or acceptance from friends, family, colleagues or clients -- and sometimes, even total strangers.

Have you ever found yourself pretending to be someone you're not in front of someone you wanted to impress, only to have it backfire on you in the end?

I know I've certainly experienced this in my own life...

How not being authentic worked against me

I was forty-four years old, and divorced after 26 years of marriage. It was Valentine's Day, and I had just agreed to marry a wonderful man.

His two children from his previous relationship were NOT happy about the news of our engagement.

"Congratulations," his 11 year-old, Michael, said. "Just don't expect me to come to the wedding."

His reaction was an unpleasant surprise to his father and me.

I understood that Michael, in particular, wasn't exactly thrilled about us deciding to mesh our lives together, but...

I figured that time and love would turn things around, and so I married his father

After I got married, I continued to make a dedicated effort to win Michael's acceptance and affection.

I continued to be very kind and sweet to this child, despite his disinterest in getting to know me.

And, even though I'm a very happy and positive person by my very nature, I do have moments when I feel tired or just plain challenged by something that's going on, just like everyone else... moments where I may not feel like smiling.

But no matter how I was feeling in the moment, when Michael would walk into a room I was in, I'd always make sure I had a big smile on my face to try and make him feel welcome and comfortable -- so much so that, sometimes, my face would hurt by the end of the day!

I also ignored certain behaviors that were actually starting to drive me nuts on the inside...

Even though I'd never let my own children get away with some of the things that Michael was doing, I thought that by allowing him room to do his thing, he'd eventually warm up to me.

On some level, I didn't want to rock the boat.

But, by always putting on a smiling face and not expressing how I really felt, I was being inauthentic.

I was trying so hard to make Michael happy, to mesh our families together and to create harmony in our home, that I was actually beginning to lose sight of who I was.

And, despite it all, Michael STILL wasn't interested in letting me in and allowing me to get close to him.

Eventually, we hit the breaking point

One day, a few months after I'd married his father, Michael called me from a local arcade saying he needed a ride home.

A friend's parent had offered to drive him home a few hours earlier, but he'd decided he wanted to stay and hang out longer. He figured he'd just call me to come and get him when he was ready.

It was already quite late in the evening. By the time I'd have driven to the arcade to pick him up, and gotten back to our house, it would've been well after midnight.

Michael was well aware that I had to get up at 4:00 a.m. to get to an engagement I had booked the next day.

I'd had a long day and I was already very tired. And, getting this last minute call so late in the evening, I became grouchy... so grouchy, in fact, that for the first time since Michael had came into my life, I just couldn't hide my irritation from him anymore.

"How could you?!" I said to him over the phone

"Michael, you know I have to be up at 4am tomorrow morning. How could you be so inconsiderate and only think of yourself?"

After a brief pause of silence, Michael said, "Who are you, and what have you done with Mary?"

He'd never experienced me lose my temper before! The Mary he'd come to know had seemed too good to be true. And the fact is, she was!

All the time that I'd been trying to be who I thought he wanted me to be, who I thought I NEEDED to be to win his approval and affection, I was pretending. I wasn't being my authentic self.

To make him like me, I'd turned myself into what I thought he wanted and needed: "Mother Nice" instead of Mary.

On the drive over to pick him up, I decided that enough was enough


I realized in that moment just how inauthentic I'd been, and I asked myself:

"Who are you, Mary, and who do you really want to be with Michael?"

Did I want to continue pretending to be someone I thought he wanted, or did I want to have a genuine, authentic life... and an authentic relationship with each of the people in it?

When I arrived and Michael got into the car, I laid everything out on the table.

I said, "Michael, here's the truth... I really care about you, but I've been trying so hard to get you to like me that I haven't been REAL with you. I haven't been being my authentic self. And this isn't your fault, it's mine."

I apologized to him for hiding when I was upset in the past, which had led to some built up resentment. I told him that in the future, I would be honest with him about how I was feeling, but that he could still always count on me to treat him with love and respect.

This didn't change our relationship overnight, but it was a turning point for us.

The first Christmas we spent as a new family, Michael came up to me with his arms behind his back and said, "I have a Christmas gift for you."

And Michael replied, "I want to start calling you 'Mom'."

This would never have happened if I had kept up the pretense of being "Mother Nice."

I deeply wanted to love Michael and I wanted him to love me.

But if I couldn't be honest with him about who I was and what I was thinking and feeling about the way he was behaving at times... what chance did we have?

Being someone other than WHO YOU REALLY ARE is not sustainable

Pretending to be someone other than who you are only broadens the distance between yourself and the person you're trying to establish closeness with. 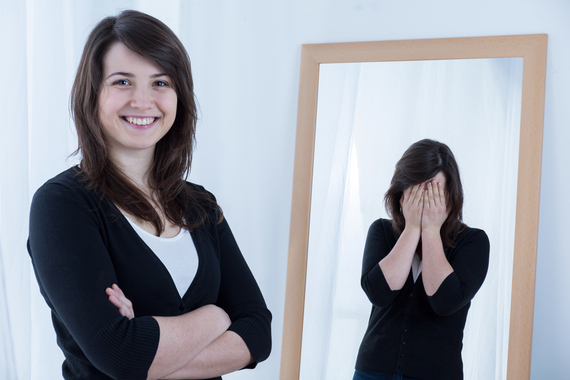 Almost all human beings get grouchy, irritable and lose their patience at times. This is just part of the human experience!

Just keep in mind that you don't always have to hide that this is how you feel.

You build REAL closeness with others through showing your true self, sharing your vulnerabilities and communicating how you really feel about things.

And, if you make a mess communicating your feelings, just as I did with Michael that night, remember that you can always go back and clean it up later.

It's never too late to step into your true, authentic self.