What do the movie "Inception," NFL Monday Night Football and the book "Blink" have in common?

All explore the emerging insights into the architecture of the mind--more specifically, the impact of priming. Priming refers to the subliminal messages our minds absorb at the unconscious level that trigger feelings, actions or both. When primed, we take in ideas that influence us without our awareness.

Through an intriguing dramatization, "Inception" explores the possibility of entering and engineering dreams without the dreamer's awareness. Monday Night Football demonstrates the commercial application of priming, with sponsors eagerly spending an estimated $1.5 billion for ads during this season's program. And in "Blink," Malcolm Gladwell explains the priming mechanism--how the kind of thinking involved in priming "moves a little faster and operates a little more mysteriously than the kind of deliberate, conscious decision-making that we usually associate with 'thinking.'"

Subliminal messages surround us, and many are innocuous or even helpful. For example, credentials and degrees in a physician's waiting room build confidence in the quality of care we are about to receive. But other subliminal messages can harm our health.

After a filling evening meal, picture yourself sitting in front of the television and feeling a bit hungry. You spontaneously get up and go to the kitchen for a snack. A little later, you repeat the cycle. And again later, you eat another snack. Certainly, being a couch potato can make your waistline expand. But the real culprit may not be so obvious--it may be the unconscious way television primes you for late-night snacking. 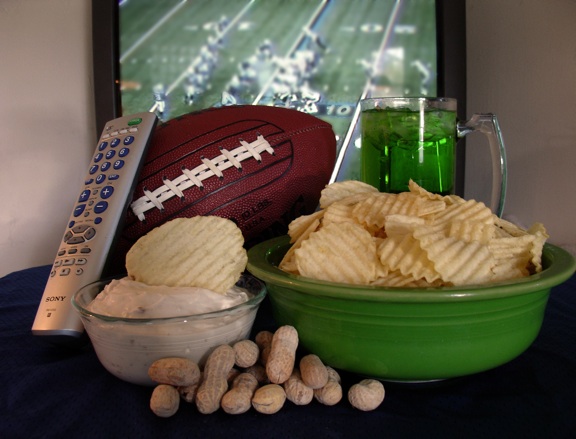 Jennifer L. Harris, John A. Bargh and Kelly D. Brownell, researchers at Yale University, are the authors of "Priming Effects of Television Food Advertising on Eating Behavior," published in Health Psychology (2009, vol.#28, no.4, 404-413). If their conclusions are correct, your spontaneous decision to eat while watching television is anything but spontaneous. You were primed to eat--and keep eating.

Our Evening Grazing Is Not Spontaneous

In their research, adults were shown a comedy show. During the program, some subjects saw junk food ads while others were shown nonfood ads. The subjects who saw the junk food ads engaged in additional eating. When they were asked why they were eating, they said they were hungry. However, they didn't eat the advertised junk food; they ate whatever was available. The researchers concluded that the advertising primed them to eat--but not necessarily to eat a specific food―and concluded that "people were eating without awareness that the ads were causing them to eat."

Similarly, the children were shown a cartoon. During the cartoon, some children watched ads promoting junk food and others watched nonfood ads. The results were the same. The children who watched the junk food ads ate more of whatever food was handy.

Keith-Thomas Ayoob, EdD, RD--an internationally known nutritionist and professor at Albert Einstein College of Medicine--is not surprised that people who saw the food ads tended to eat more. However, he said, "What's interesting is that people didn't eat the advertised food--they ate what they had available."

In the Midst of An Epidemic of Obesity, Are We Priming Individuals to Eat More?

Imagine, if you will, purposefully exposing adults and children day after day to food priming. If the Nielsen's Company study is correct, that's exactly what is occurring. Television viewing has never been higher: Americans are watching on average of five hours of television each day. According to researchers the University of Michigan, children are watching television over four hours each day.

And consider this: most of our television viewing occurs in the evening, and late-night snacks are unusually high in calories--for example, ice cream, chips, cookies and snack foods. Eating in front of the television also leads to oversized portions since our attention is focused on the program, not on the food. So a handful of potato chips can quickly become an entire bag.

Since most of us are not likely to give up nightly entertainment altogether, what's the best strategy to avoid television-induced eating?

Dr. Ayoob's first recommendation is simple. Limit television time to two hours for all family members. We can also plan ahead. Dr. Ayoob warns us that all of us are susceptible to food priming:

Everyone has triggers that make us more likely to eat. It's important to be aware of our own triggers and deal with them positively. Those pint-sized containers of gourmet ice cream are a perfect example. The label says there are four servings. But if you think you'll have a serving on four separate occasions, you're kidding yourself if ice cream is a trigger food. The four servings will be eaten at 8:00, 8:05, 8:10, and 8:15 p.m. Then you blame yourself, but the problem was in bringing it home in the first place.

By anticipating our behavior, we can have healthy snacks available if we find ourselves hungry later in the evening. An apple or a small bowl of wholegrain cereal with milk is a good example. Saving calories from earlier in the day is an option as well.

We can also replace junk food ads with self-talk that promotes good health and appropriate eating. In terms of how our minds work, a background message is a background message, whether it comes from a television set or our own thoughts. Both leave indelible impressions. Once we are forewarned that a junk food ad can trigger an impulse to eat, we can counter its effect with self-talk.

Remaining Conscious Is the Challenge

What all of these strategies have in common is a willingness to stay intentional about eating. "Paying attention can make each bite a choice rather than a reflexive response," says Megrette Fletcher, executive director of the Center for Mindful Eating. "You may love Oreos, but that doesn't mean you have to eat one every time it presents itself. If you stop and consider that next Oreo and how you're feeling, you may opt to skip it--or not. But at least it will have been a conscious choice."

Without moving into a cave, we can't limit our exposure to the priming cues that bombard us daily, but we can be proactive in managing our eating. Brian Wansink, author of "Mindless Eating: Why We Eat More Than We Think," has created a toolbox with wonderful ideas to help us stay conscious about our eating. He cautions us, though, that since every person is unique, we have to discover the strategies and tactics that work best in our own situation.

Is the effort worthwhile? You'll have to decide for yourself. The outcome, however, will determine whether you are primed to be fat or enjoying the prime of your life.