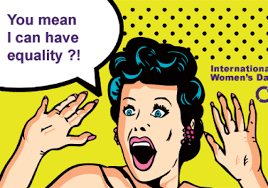 I read an article about Trump and the political future of the country today that mentioned in matter-of-fact terms what Hillary would likely do on arriving in office, as opposed to what he would do. It struck me that this was one of the first things I've read discussing HRC's presidency in REAL terms-- as if she may actually BE the President. I confess, the experience totally blew me away. And I'm someone who's been envisioning, working, preparing, in a way, for something like this for a long time.

Including my Ph.D work, I must have read tens of thousands of pages of feminist theory (and written some of my own); had hundreds of hours of therapy of various kinds, much of it addressing liberation from preconceived ideas of femaleness; absorbed myself in researching, creating rituals, and writing poetry and prose involving female power, goddesses, and matriarchy; spent weeks of time in woman-only gatherings and communities; and developed and participated in ongoing woman-centered and woman-affirming communities of my own, both online and offline. Not to mention that since first caucusing for Hillary in 2008 I've been, on a regular basis if not daily, hoping and thinking about the chance that she might get to this point--(because I feel it's THAT important for the survival and health of the planet, not to mention this country, that we have a strong feminist president, yesterday).

After all this, I imagine I must be about as prepared as it's possible for an ordinary citizen--not a political-type -- to be for the reality of having a woman president.

And what I'm thinking is this--if even someone like me has a hard time wrapping my head around the magnitude of the breakthrough we are facing, there must be a lot of other people in this country who haven't been preparing at all and who are going to be having a much harder time dealing with change of this scope, on a visceral level. It's truly a BIG DEAL.

So, let's be kind with one another even as we stand firm against the horrors of the degrading and violent sexism, conscious or unconscious, externalized or perhaps internalized, that is sure to be emerging from many quarters expected and unexpected over the coming months. Let's aim to remain compassionate, understanding, firm, and brave.

And if indeed it will turn out that we will be the first humans in this nation to hear someone say the words "Madam President" for real, let's ease ourselves, as a country, from now to that day with as much grace and compassion as we can summon. Let's hold space for the journeys of every one of us, of any gender and political persuasion, who may be bringing their own and their ancestors' legacies of violent, oppressive, and unrelenting patriarchal dominance, rooted centuries and millennia long in the vast majority of cultures around the globe, to this new reality that it seems the U.S. may now be approaching.

Grateful to live in this democracy.