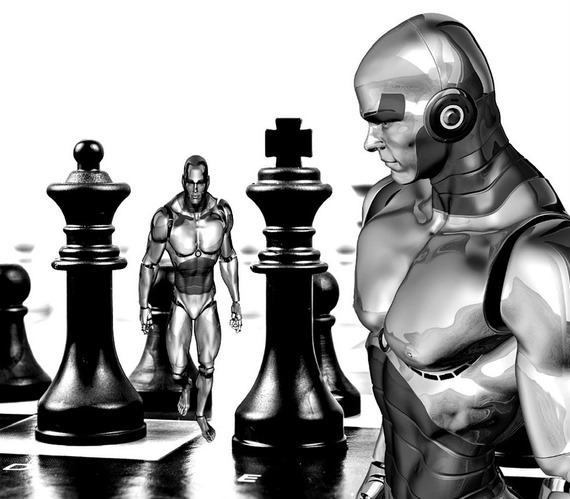 Are you ready for the future? A Transhumanist future? One where everyone around you--friends, family, and neighbors--has dipped into the transhumanist punch bowl. A future of contact lenses that see in the dark, endoskeleton attached artificial limbs that lift a half-ton, and brain chip implants that read your thoughts and instantly communicate them to others. Sound crazy? Indeed, it does. Nevertheless, it's coming soon. Very soon. In fact, much of the technology already exists. Some of it's being sold commercially at your local superstore or being tested in laboratories right now around the world.

We've all heard about driverless test cars on the roads and how doctors in France are replacing people's hearts with permanent robotic ones, but did you know there's already a multi-billion dollar market for brain wave reading headsets? Using electroencephalography (EEG) sensors that pick up and monitor brain activity, NeuroSky's MindWave can attach to Google Glass and allow you to take a picture and post it to Facebook and Twitter just by thinking about it. Other headsets allow you to play video games on your iPhone just with your thoughts too. In fact, well over a year ago now, the first mind-to-mind communication took place. A researcher in India projected a thought to a colleague in France, and using their headsets, they understood each other. Telepathy went from science fiction to reality.

The history of transhumanism--the burgeoning field of science and radical tech used to describe robotic implants, prosthetics, and cyborg-like enhancements in the human being and its experience--has come a long way since scientists began throwing around the term a half century ago. What a difference a generation or two makes. Today a thriving pro-cyborg medical industry is setting the stage for trillion-dollar markets that will remake the human experience. Five million people in America suffer from Alzheimer's, but a new surgery that involves installing brain implants is showing promise in restoring people's memory and improving lives. The use of medical and microchip implants, whether in the brain or not, are expected to surge in the coming years. Some experts surmise as many as half of Americans will have implants by 2020. I already have one in my hand. It's truly a new age for humans.

Standing proud at the forefront of all this change is the fascinating biohacker culture, where extreme inventors and innovators are leading the way by sticking RFID tracking chips in their bodies, permanent wireless headphones near their eardrums, and magnets in their fingers.

Rick Lee, a leading biohacker--also called a grinder--told me, "Implanting magnets in your fingertips gives you the ability to feel magnetic fields. Your fingertips have lots of nerve endings jammed into one area and they are really sensitive to stimuli. Magnets twitch or move in the presence of magnetic fields, and when you implant one in your finger you can really start to feel different magnetic fields around you. So it is like a sixth sense. You can now perceive an otherwise invisible world."

Of course, the challenge with such progress is the question of whether we're leaving behind our humanness and humanity. It's a good question. However, we shouldn't forget our sense of being a human is ultimately based on millions of years of evolution. In the end, like it or not, we are still stardust from eons ago--and not just biological humans. Perhaps deep down, the essence of our being and the wiring of our brain comprehend that in a spiritual way we can't rationally understand yet. After all, our evolutionary heritage is the cornerstone of why human beings are what they are: mammals that are becoming essentially gods.

Whatever happens, along the way humans and their advancing technology will create paths and designs of our universe that transform us into other entities--into transhuman beings. We are standing at the doorstep of a new world and experience, and the transhumanist punch bowl is just our first drink of the future.