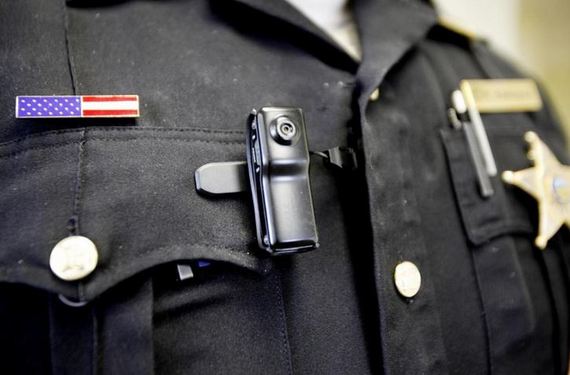 With the ongoing incidents concerning inappropriate police shootings, the call for body cameras is getting increasingly louder. So loud that scores of police departments across the nation have already implemented or begun implementation of the technology. But body cameras pose significant privacy issues, particularly for the LGBT community. Are you ready for your close-up?

The first privacy concern with body cameras is when should the devices be turned on? The ACLU has suggested that all encounters between citizens and the police should be recorded whenever possible. While that sounds great on the surface, it does not prevent potential retribution for those who may be reporting a crime against a gang for example. Since the video may be available to the media and general public due to freedom of information policies, that means the gang will have access to the witness video once the case has been resolved. In short, Tony Soprano could get access to the video showing who snitched on his organization, putting the witness at risk. Not good.

Police deal with situations that may involve victims of rape, domestic or child abuse, should these victims be taped? If so, what drives the taping? Severity of the event, age of the victim? While these crimes occur in all communities, unfortunately when the media or police add the word "gay," it often creates heightened concern and interest with the public; gay rape victim, gay domestic abuse. This highlights why LGBT privacy concerns surrounding body cameras are a bit different than other communities. When gay, lesbian, or transgender is used as part of the descriptor of a video being broadcast by the media is the victim's privacy violated?

While I wish everyone had the luxury of being "out" in every situation and in all aspects of their lives, it simply does not represent reality. So that means an encounter with the police could lead to an unintentional "outing." Let's say you are a bystander at a fight at a local bar and the police are called. When the police arrive on the scene, their body cameras are engaged. A video of the incident is broadcast by the media and there you are in front of the known "gay" bar. Your employer or coworker sees it; you are "outed." While the LGBT community does have protections against employment discrimination in some states, meaning you can't be fired for being a member of the LGBT community, 29 states allow employment discrimination based upon sexual orientation and 32 states based upon gender identity.

A member of the LGBT community could also be "outed" due to a domestic dispute that is taped at their home. San Diego Police Association President Brian Marvel has eloquently said, "Most people are not at their best in encounters with police." That is why some modicum of privacy must be maintained.

An unintentional outing by the police may be a price the LGBT community has to pay for the greater good. But that possibility could have a chilling effect on police reports by closeted members of the LGBT community. On the other hand, body cameras could significantly help with harassment claims from transgender members of our community who may have inappropriate encounters with the police. A true dilemma. What should be the LGBT community's recommendation to law enforcement?

Most privacy issues concerning body cameras are really being driven by who will have access to the video, particularly access by the media and private citizens. Once the media broadcasts a police body camera video it will live forever on the Internet. So limited media access needs to be seriously considered. For example, should the police be able to blur the images of those not central to the incident to protect citizen identities before the video is released to the media?

If my neighbor dislikes me because I'm gay, should he be able to get the video of the domestic dispute with my partner to share with his friends in the neighborhood? Or worse, anonymously send the video to my job? Does my neighbor really deserve access to the video in the first place?

There are also the issues of how long and where the video information is stored, and if you can request that an encounter with the police not be taped. All thorny privacy issues that police departments across the nation will have to address head on. Are you ready for your close-up? Based upon recent incidents, your answer should be, yes Mr. DeMille.