I'm dying to know how many of you are seriously going to move to Canada when someone you don't like becomes our next president.

Are you really moving to Canada?

Over the weekend, I had a lively conversation over adult beverages with a few friends who represent a variety of political affiliations. I was curious: Just how bad is life with Obama in office? In our particular group, nobody appeared to have anything terrible happening that they could attribute to Obama. In fact, life has been pretty great, even for my most conservative Republican friends. To that I offer up a sincerely non-sarcastic, "Thanks, Obama!"

Pressing further, I wanted to know how many people actually move to Canada when their candidate doesn't win. My smart Republican friend wagered that nobody does. I came home and began some research to find out.

Thanks to a recent article in The Guardian written by Jordan G Teicher, I learned that in 2004, a staggering 179,000 people visited Canada's official immigration website.

So it's not just all talk, eh?

Not so fast. Teicher writes that of the 179,000 people dipping their toe in the water of packing up the chuckwagon and moving to Canada, only 9,000 people a year actually do it. In fact, that number has been consistent from 2005 to 2014, so there doesn't appear to be scientific evidence associating the Canadian migration to anything politically motivated.

As a Texan who found herself extremely involved in the political process when we tried to elect a badass senator by the name of Wendy Davis, I will admit that when she lost, I seriously thought about packing up the family and moving, at the very least to a state where my reproductive rights weren't being dictated by a bunch of sour-faced old white guys who think they have the right to dictate what women do with their hoo-has. Then election day came and went. I cried some sincere tears of disappointment, then -- to borrow one of my sister's best phrases from her childhood -- I powdered my nose and got on with life.

Still, I was interested in learning just how many people move when the "wrong" candidate wins. When I began my research, I simply Googled, "Moving to Canada." The following search suggestions came up:

Unsurprisingly, "Moving to Canada from the US" is the 2nd most popular search string. However, "Moving to Canada with guns" is just below moving there with pets. Canada, if you don't already know, US citizens love their Chiweenies, but they're also very, very fond of their guns, and they are going to expect that you welcome them with -- pardon the bad pun -- open arms. 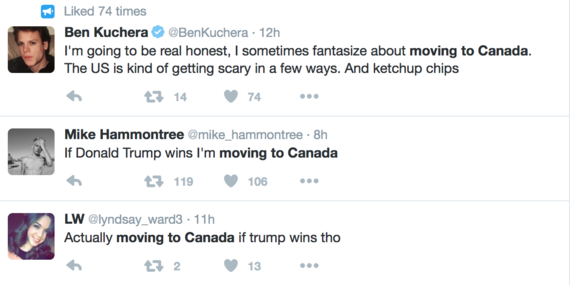 Writer Ben Kuchera is going to be "real honest," he sometimes fantasizes about moving to Canada. Since he's also pretty fired up about Canadian ketchup chips, lets assume he's just being sarcastic. Aspiring model Mike Hammontree has 106 of his closest friends who support his desire to move north, so perhaps they can set up a GoFundMe to help cover the costs (and buy him a coat). LW is so excited about moving if Trump wins, she can't even capitalize or finish her statement! Peace out, LW!

As for me, I am certainly concerned about the election results. I'm being sincere when I tell you that if Ted Cruz wins, I'm going to gag audibly every day I have to see him on a tv screen. However, no matter the election outcome, I'm sticking around. I like this country, and I know that if I volunteer and stay involved in issues that I find important, I have the ability to drive some actual change here. If nothing else, I'm staying here for the chips and queso. No ketchup chips for me, thanks.