I'm not aware of too many things
I know what I know, if you know what I mean
Philosophy is the talk on a cereal box
Religion is the smile on a dog

I'm not aware of too many things
I know what I know, if you know what I mean
Philosophy is a walk on the slippery rocks
Religion is a light in the fog
Edie Brickell, "What I Am"

As I currently reside in a community where most inhabitants think that Heidegger is a cold press juicer, Wittgenstein is a massage style, and Derrida is an upmarket face cream, imagine my joy last Saturday evening at Esalen when I found myself breaking wheat bread - by complete chance, nonetheless - with two of America's greatest living philosophers and intellectuals, Michael Murphy and Sam Keen!

To say philosophy is dead in America would not be inaccurate - it is difficult to imagine a topic less in vogue besides waterboarding - but maybe we have reached a point where the Western tradition of analytic reasoning is tantamount to what Nietzsche called "adding more unknown to the already known" or is bent on asking what the Buddha referred to as "unprofitable questions"?

In my opinion, the most interesting philosophy conducted in North America is done by yoga scholars such as Matthew Remski and David Gordon White who obviously owe as much to Michael Murphy and Sam Keen as they do to Schopenhauer who introduced the West to the Upanishads.

When I read Sam's eloquently written "In the Absence of God: Dwelling in the Presence of the Sacred" and learned that he responds to the question "Are you Sam Keen?" with "Not yet" I recalled Sartre's distinction between "being-for-itself" and "being-in-itself." But Sam told me that he was actually referring to Gabriel Marcel's adage: Life is not a problem to be solved but a mystery to be lived. Thus, we are all what Ani DiFranco calls "works in progress." Life is a process, an adventure, an overcoming, an exploration, a ride, and (egads) a journey. Only when it says "Sam Keen" or "Ira Israel" on our tombstones will we "be" Sam Keen" or "Ira Israel;" right now we are "becomings." 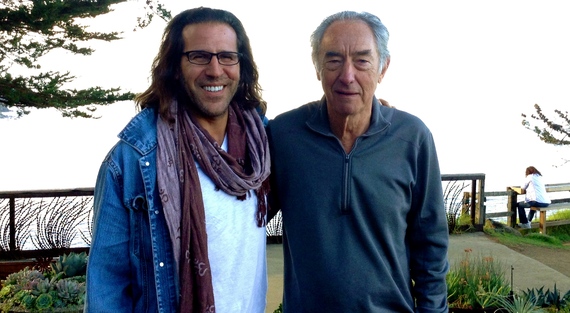 With Sam "Not Yet" Keen

I find that one of the problems with Western philosophy is that the endgame of deconstruction appears to be solipsism. As Edie Brickell states above, ("I know what I know") what else can you be 100% certain of aside from what arises in your consciousness? And if every living creature has a purely subjective perspective then where can we find consensus? Wittgenstein's provocative question regarding how one can be certain when she says 'red' that another person imagines the same color/shade still plagues students of philosophy of mind. (c.f. Thomas Nagel's "What Is It Like To Be A Bat?" 1974)

Could all of New Age spirituality be on the same trajectory as Western philosophy? Sam writes, "Currently, we are experiencing widespread disillusionment with organized religion, an explosion of interest in spirituality and new forms of ritual, and a resurgent interest in fundamentalism.... (But) overall, the movement toward spirituality suffers from excessive individualism and does little to address our endemic problem of isolation, alienation, and loneliness."

In contrast to Philip Rieff mourning the shifting cultural paradigm and resulting alienation and segregation in "Fellow Teachers," Sam points out in the final chapters of "In the Absence of God: Dwelling in the Presence of the Sacred" our need to create "communities of concern" around such urgent issues as ecological, political, economic and social justice and use tools such as gratitude to become "re-enchanted" with life.

"Communities of concern" was exactly what Michael Murphy had in mind when he co-founded Esalen in 1962. He wanted to create a place for people to come together and explore many of the topics they cared most about: What is the connection between our minds and our bodies? How can we deepen our spiritual lives when for so many people mainstream religion has gone stale? What are the interesting Eastern and alternative healing modalities available to us? As well as many other fascinating questions that were excluded from most universities at that time. 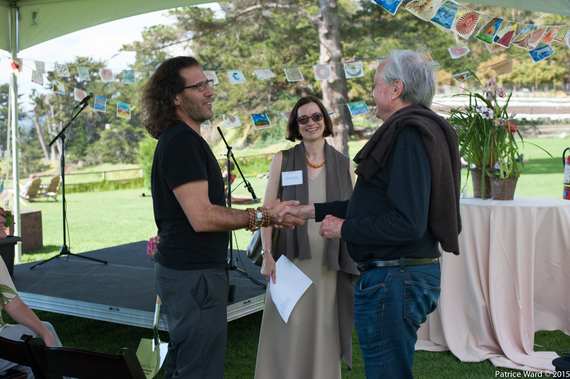 For fifty years Esalen's Center for Theory & Research has brought together activists, academics, researchers, business leaders and practitioners across cultures and disciplines to bridge divides and engender change in both individuals and society. What is obviously lacking in our society is the communal space that is created at Esalen every day. Whereas 30 years ago people chatted in cafes, now most people wear ear-buds in public while they desperately work on their websites, television pilots, Kickstarter campaigns, Youtube series, Mailchimp spams, or some get-rich-quick scheme to try to attain the vaunted 1% status that most one-percenters vehemently deny possessing.

As conscious business innovator and Esalen Trustee Chip Conley (below) told me, "The more digital we become, the more ritual we need." I feel blessed to be able to commune with visionaries like Michael Murphy, Sam Keen and Chip Conley about our mutual concerns. 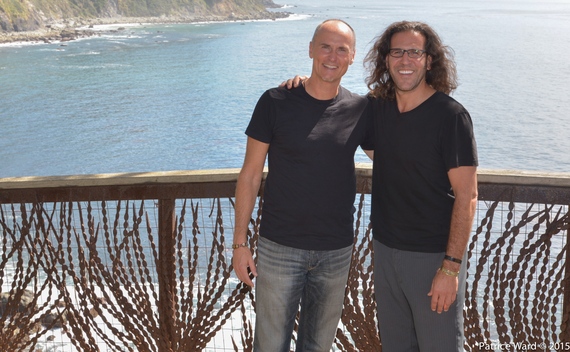