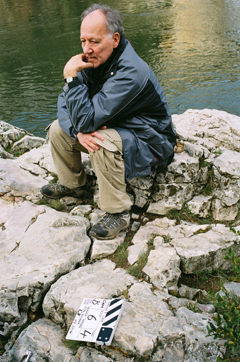 Werner Herzog is one filmmaker who defies the trailer, the reviewer and whatever formula you want to put on him. When I walk into a Herzog movie I never know what's going to happen. And when I walk out of one, I often question how to put into words what I just saw.

There are elements of surprise in a slasher film, but that's not the kind of unexpectedness I'm talking about. Nor am I talking about movies where this happens:

It's about 3 minutes until the movie's gonna start.

"You go ahead, that way one of us will know how it opens."

"Well, you see there's gonna be a car chase/heist and the main characters are gonna get what they need and haul outta there.

We collect our snacks, find our seats and watch as the film opens: there's a car chase/heist and the main characters get what they need and haul outta there.

Half the time when I go to the movies (and it doesn't matter what type of film by the way) I feel like I already know what's going to happen. Maybe it's because trailers reveal so much of the plot these days or because reviewers curate the experience (explaining what it all means and what happens) in such a way that the audience goes in primed with a set of ideas about what they are about to see.

I don't necessarily have a problem with this. I too want to be sure to get something good in exchange for my time and money. And as I am writing a film review right now, I can hardly be critical of something I'm participating in. I can't even point to the formulaic nature of films because there's nothing intrinsically wrong with formulas. Formulas are rules, ideas about story honed in our minds ever since we began to entertain each other.

If Herzog has a formula at all, I think it's this - he is looking at the world with a question. And you get the sense that he is asking you - do you see this? Is this crazy to you, too?

I suppose the answer Herzog gets depends on his mood at the time. Sometimes I watch his films and think, oh he's a little depressed in this one or, now he's in love. In THE BAD LIEUTENANT, a cop story set in New Orleans, Herzog "randomly" finds ways to do mysterious cutaways to iguanas.

Why the iguanas, Werner?

But of course I knew why.

First off, it's funny - funny because he thought iguanas were in fact the way to portray Nicolas Cage's character being high and more so because of the way Herzog shoots them - long lingering close-ups of a face, an eye, an arm - of that one special lizard. I love this NY magazine video interview where Logan Hill comments on the humor of it and Herzog says he was just thinking, "it would be great if I could have a couple of iguanas there."

Yes, so many times I've thought, what I really need now are a couple of iguanas, that would clear this situation up right quick.

His choices can be so unexpected; he just makes me laugh with the playfulness of his mind.

Herzog describes the iguanas as "insipid" and says he only showed them to portray how coked-up Cage's character was that he hallucinated seeing them.

I don't completely buy this explanation. Herzog includes "the wild" in too many of his films to take such a derisive view of nature. Maybe he's in denial about his love for it. Or perhaps on a more abstract level, Herzog is running a longstanding, somewhat wacky, dialogue between himself and Mother Nature. And the iguanas are there to suggest:

CAVE OF FORGOTTEN DREAMS is his latest effort, in 3D no less, and the premise of the film is that Herzog is among an elite group of scientists, researchers and historians who are getting access to Chauvet Cave. A hidden area has recently been discovered and ancient drawings/markings are now available to be viewed and studied. But the film, in Herzog's inimitable style, soon becomes not so by-the-numbers. Herzog is like a spider. He creates a feeling, a constellation of thoughts around an idea.

We see Herzog making a case for the mindset and values of a particular group of people, living in this part of the world -- as if to see if there are any connections to us. What we see are walls portraying the creatures living outside the cave in beautiful and lively detail, showing movement and flow. And there is only one image of a person -- and it's a she. Even more interestingly -- it portrays the most important part of her anatomy (your guess).

Herzog visits scholars who show artwork of the same era and we see a Venus-figurine of woman with heavy, droopy breasts, exposed vagina and a life-giving belly and are given to deduce that people at this time highly-valued these attributes. Herzog reveals how animal and woman held an elevated position in the artists' eye - for their intrinsic beauty, complexity and nurturing attributes and man knew he was a custodian to these elements.

Incidentally, I saw the film at a press screening and the women in the audience sort of squirmed when the Venus image came up. Some laughed, others whispered to the person beside them. It was fascinating to me that this visual of beauty and fecundity elicited this reaction -- and from women (not men). Alternatively, it might be that what I'm inferring from the rustling in the audience was not embarrassment but delight, and maybe what I was seeing there was really my own reaction. I don't know. At any rate, it seemed worth mentioning, as we who cover films, shape, well actually, your opinion. And that moment of "reaction" also illustrates how Herzog challenges the viewer in unexpected ways.

Round about this point a typical doc would cut to a commercial (because it would more easily be made for TV) with the promise that Secrets of the Cavemen Revealed! will be back with the really good stuff. After the ads: reenactments of sexy men and women in fur, dancing around a fire and painting on the walls with spent tiki torches, all so we can "imagine" what it was really like.

But Herzog knows he's onto something good.

This is the CAVE OF FORGOTTEN DREAMS!

He knows what he's seeing. These just aren't pictures, these are the foundations of the archetypes that are and were the stuff of our dreams today.

Haven't you ever wondered where your dreams come from?

Here! This is the landscape of your mind or at least part of it.

You have only just forgotten this because now it's unconscious!

Herzog seems to be saying all of these things -- and at once, as if both shouting and laughing from behind his camera.

In a very unassuming way he literally shows the pictures that are like the common threads we all have in our minds. Here in front of you are the archetypes Jungians have only theorized about.

As if to underscore how far we may have alienated ourselves from all this, and how much we have forgotten, Herzog closes with a visit to a destination near the Chauvet Cave. It's an animal habitat where albino crocodiles float along in the water runoff from a nuclear power plant. These albino crocs are living in a biosphere much like an artificial cave. Herzog zooms in as two stare into each other's eyes.

Here's looking at you.

Herzog doesn't look at the sun. He paints all around it, creating the space about an object/topic/ thing/person and so that the audience slowly sees "it" independent from his vision. He assumes a lot from you as the viewer, namely that you can figure things out and that you can make your own conclusions.

What a lovely surprise.

CAVE OF FORGOTTEN DREAMS is now in theaters and most of his older films are available to rent.