One of the key goals of the Affordable Care Act (ACA), popularly known as Obamacare, was to reduce the number of uninsured Americans by expanding access to healthcare coverage to individuals through Medicaid expansions, private insurance reforms and premium tax credits.

If fully implemented, under ACA, the subsidized individual mandate was expected to add up to 16 million insurance coverage via marketplaces, 16 million via Medicaid expansion and another 2-3 million coverage through employer-sponsored insurance for individuals <26 years of age.

Medicaid eligibility would be expanded to cover nearly all low-income individuals with incomes at or below 138 percent of the Federal Poverty Level (FPL). This would allow coverage to those individuals who would otherwise not meet the eligibility requirements for traditional Medicaid.

According to another report by US Department of Health and Human Services, in 2016, 6.8 million women and girls selected affordable, quality health plans through the Health Insurance Marketplaces.

Despite the obvious gains in the number of those insured under ACA, many individuals, including women, remain uninsured. Below are some of the topics to explore why this is the case.

1. Medicaid Expansion
ACA's Medicare expansion was intended to include all states; unfortunately this has not been the case. In 2012, the US Supreme Court made this requirement optional to the states.

It meant that if a state decided to stick to traditional Medicaid eligibility requirements, only individuals meeting such requirements would receive health insurance coverage.

To date, 19 states have not expanded their Medicaid programs. Low-income women from these states, who don't qualify for traditional Medicaid, are left uninsured even though they would have been covered through Medicaid expansion program.

2. Women as Dependents
Women, especially in families with one-full time worker, are more likely than men to be covered as dependents. When a spouse loses a job or coverage through an employer or dies, coverage for dependents are lost as well.

3. ACA, Medicaid and the Coverage Gap
Individuals whose incomes are above the income-requirement levels for Medicaid, but below the minimum limit for Market Place Premium Tax Credits, fall under "coverage gap" (Figure1) since they neither qualify for Medicaid nor for ACA. States that have not expanded Medicaid are likely to have comparatively higher number of individuals in this group than those that have expanded Medicaid.

Individuals also become uninsured when they are not 'poor enough' to qualify for traditional Medicaid, but cannot afford coverage through other sources including through private coverage or their employers. 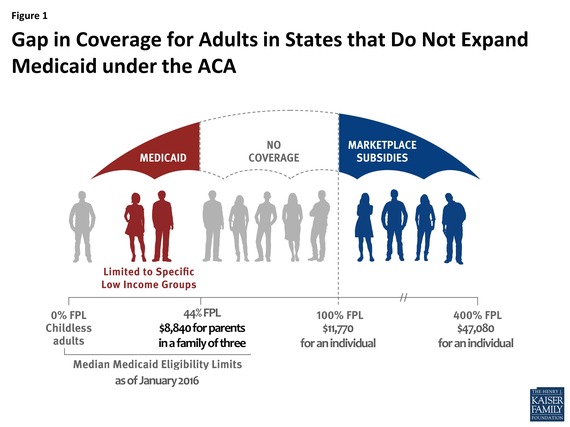 4. High Cost of Health Insurance Premiums
US healthcare costs are simply too high. US spends a lot more on health care than any other country. A study by Kaiser Family Foundation shows that many employers are shifting healthcare costs to workers.

There are many working women and families, including those in states that have expanded Medicaid, who don't qualify for ACA because their incomes are considered 'high'. However, as a result of the high premium costs, they cannot afford employer-sponsored or private coverage.

5. Ignorance
Despite the widespread education about ACA law, some individuals remain ignorant about the types of benefits they get from the law. In addition, those who believe that Obamacare is "socialized medicine" and the source of all problems inflicting US healthcare system (e.g. high premiums), are likely to forgo ACA coverage, even if they need it.