In many companies, stress is held as a sign of success. It's a badge of honor and a test of loyalty. It's the fuel we use to get things done. Yet there's a fine line between stress and overstress. Where stress can lead to success, overstress is one of the primary predictors of failure. And perversely, the more committed we are to creating results, the larger this danger becomes.

In a time of brutal competition and blistering change, the willingness to take on more stress is often the requirement for a raise and the price for a promotion. It's a straightforward deal. We make a little sacrifice today, in order to build a better tomorrow.

We may know that 70 to 90 percent of employee hospital visits are linked to stress, that one in three Americans thought seriously about quitting work in 2000 because of job stress, and that more than one million people per day are absent from work due to stress-related disorders. But if it lets us hit our numbers this quarter, well -- sometimes you just have to be willing to take one for the team. 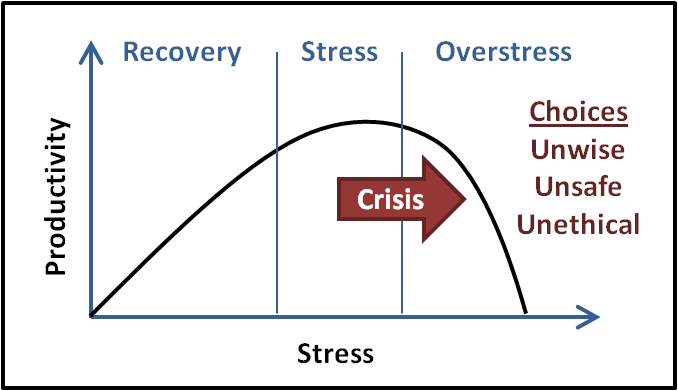 The challenge is that after a point, this bargain stops working. Where stress can help us deal with problems, overstress just makes them worse. After a point, the harder we push, the worse our productivity gets, because stress makes us stupid.

Here's why. When talking about motivation, "stress" is really just a polite word for fear. It's a pattern of using negative motivators to create positive results. "I'm stressed" usually means something like "I'm scared I've got too much to do and I'm going to fail."

That jolt of energy that comes with being stressed? That's fear speaking. It's a fight or flight reaction. And while fear can be great for helping us outrun a tiger, it destroys trust, eliminates creativity, and limits our capacity for rational thought. At a physiological level, fear drains the blood from our brains and sends it to our muscles. It shuts down our neocortex and puts the animal in charge. While a certain level of stress can increase productivity, overstress causes us - at a deep, biological level - to start making choices that are unwise, unsafe, and even unethical.

This wouldn't matter so much if the pattern was self-correcting. Unfortunately, it's usually self-reinforcing. When a team moves from stress to overstress, a major crisis often follows. 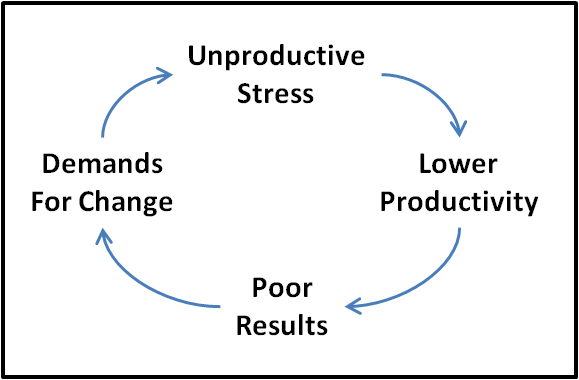 The crisis typically starts when a stressed but productive team faces a large demand for change. This can be something negative, such as a drop in revenues, a manufacturing failure, or a regulatory issue. Or the crisis can start with something positive, such as a new strategy, organizational structure, or process re-engineering effort.

Results are equal to processes times productivity. In a crisis, most leaders respond with new strategies (process changes) and by pushing people to work harder (productivity changes). However, once a team has crossed the line from stress to overstress, any process improvements usually come with an equal or greater cost in terms of productivity, and trying to push an overstressed team harder only makes them perform worse.

For example, here's a common pattern we see in companies. An organization will create a solid foundation of success, through a culture of hard work, entrepreneurial creativity, and heroic effort. They may even become a market leader. As they grow, they combine solid processes with high productivity (6 * 8 = 48). Yet after a point, their processes fail to keep up (4 * 8 = 32). This then triggers a crisis, which requires a strategy change or a process re-engineering initiative. That improves the processes, but puts one or more critical teams into severe overstress, resulting in a further drop in results for those teams (6 * 2 = 12). This impacts earnings, layoffs follow, and the crisis escalates.

When a company gets to this point, it often starts a long, downward slide. At first, people push harder to try and meet their goals, but when this doesn't work, they eventually start quitting, burning out, or retiring in place. A cancer starts growing through the organization, and the only question is how much damage it's going to do.

Thankfully, there's a way out. There are a set of strategic interventions that have a proven record of reversing this cycle. They involve reducing the short term expectations on a team, while investing in specific support structures that remove overstress, increase the capacity for effective teamwork, and increase productivity. Doing so can produce radical changes in results.

For example, a division of another company spent decades in decline. Their manufacturing plant is 30 years old, while their competitors have new facilities. For over ten years, they consistently missed their quarterly targets for production, quality, safety and environmental impact. In response, headquarters developed a pattern of demanding changes and pushing harder, but this just made things worse. Anyone who could quit, did. Things got so bad that none of the remaining people could remember a time when they didn't feel like a failure.

To address this sustained crisis, the company invested in a set of strategic interventions to increase the leadership and productivity of their key teams. After 12 months of deep and courageous work, in the last quarter the division exceeded their targets in all four areas, and posted their best results ever.

If your team is in an overstress crisis, you can turn things around with the right professional help. However, it's much easier to avoid the crisis in the first place.

Instead of pushing your team to the edge of overstress, make sure they have some extra "headroom" to cope with the inevitable changes and problems that regularly arise. Instead of treating leadership as just a competency to be hired, consistently invest in developing leadership at all levels, using proven, state of the art structures. And instead of ignoring the costs of change, develop awareness of how stressed your team is, and then create plans for addressing the productivity costs of any process changes.

Here's a tool to help you do so.

Answer each of the following questions on a scale of 1-5, where:
1 = Strongly Disagree
2 = Disagree
3 = Neither Agree nor Disagree
4 = Agree
5 = Strongly Agree

6 - 14 In the Zone. Congratulations! You've built an amazing team.

15 - 21 Fine for Now. Your team is succeeding, but may be at risk when the next crisis hits.

22 - 26 Overstress. Your team can not cope with this level of stress. You have three choices: create a productivity breakthrough, reduce your team's responsibilities, or watch the crisis escalate.