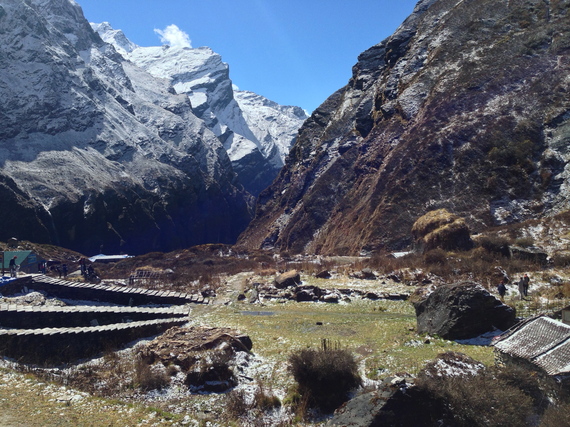 On a 10-day trek along Nepal's spectacular Annapurna route, our group of mostly athletic young adults struggled through seven-hour hikes up and down steep Himalayan terrain in both pounding heat and, as the elevation increased, near-freezing cold. So I was surprised that our demographic was far from the only one populating the trails. While 20- to 40-somethings made up the majority of the trekkers we passed, there were also a large number of elderly trekkers and even some families with young children in tow.

Since then, I've spoken with several "nontraditional" trekkers, including retirees and families. For these travelers, trekking shouldn't have a standard age, and it offers far greater rewards than an easy vacation lounging at a beach resort. Yes, trekking involves training, research and fitting weeks' worth of supplies into one bag. But when you distill it down, a trek is just a long-distance walk -- something anyone in generally fit condition is capable of with the right preparation.

Jeff Wilson, who hosts "Real Rail Adventures" on Public TV and runs New Eyes Travel, has been taking his two daughters backpacking with his wife since they were 5 years old. Their first multi-night trip was in the mountains at Great Basin National Park at ages 7 and 10.

"We have a family game where, each year, they are challenged to 'hike their age,'" says Wilson. "They're now quite adept, carry their own gear, and complain at their own peril. Actually, at this age, they appreciate the challenge, and often push their old man. They now are disappointed if we don't finish what we set out to do."

For Wilson, the trip would be incomplete with his daughters. "This is time to be a family, experience fully the places where we travel, and have all of those long talks we've been meaning to have."

Older travelers also find the slower pace of traveling by foot leads to a more intimate experience getting to know both your fellow travelers and the local culture and surroundings.

Patty Baird, 51, who owns the Cedar House Sport Hotel in California along with her husband Jeff, 68, says, "trekking is a sport that works well as we age." The couple completed the Classic Inca Trail to Machu Picchu in April this year and have done the Kunisaki Trek in Japan, which follows the steps of Buddhist monks.

"What we love about trekking is that it allows a more intimate and authentic contact with the local people and the place," says Baird. "We feel it is the best way to see a place and to truly experience the history and stories that only the trails will share with you."

But trekking is not a walk in the park (unless it's a national park). Norman Freund from Tiffield, England, has been trekking in Bhutan twice at elevations of up to 10,000 feet, most recently when he was 72 and his wife was 64.

"Trekking, especially in a fairly remote environment like Bhutan, is not be taken lightly by anyone, least of all retirees. You need to be generally fit and, if you have medical conditions which could flare up any time, a trek remote from a doctor or hospital is to be avoided," says Freund.

Although some routes have the option to stay in teahouses -- dorm-style accommodations that are little more than four walls and a bed -- Freund and his wife roughed it even more by camping in tents. "My wife found sleeping on the ground in a sleeping bag not much fun; I did not mind it too much though I didn't sleep too well," recalls Freund.

Depending on the location, trekking conditions may include freezing nights, cold or non-existent showers, and reduced oxygen at high altitudes. To train, Freund took long walks on a treadmill and Baird walked outdoors up to 50 miles a week. Stair climbing can also help build muscle and lung endurance.

Besides training, smart packing is another key to a successful trek. Travelers must find the balance between packing light and being well prepared. Quality gear is essential.

"Older people especially need to have very good footwear, with firm ankle support, and the boots should be well worn in before you go on the trek," says Freund. He also recommends collapsible walking sticks, which help with balance and absorb some of the impact on the joints.

Good shoes are also important for younger travelers, and Wilson recommends kids have quality packs that are sized to their frames as they grow. "Good gear allows us to stay out longer and camp in conditions when others might give up and head for a hotel, ultimately saving money and giving us a better experience."

In regions such as Nepal, it's common to hike with a small day pack and hire porters or packhorses to carry the heavier bags. Marisol Mosquera, founder of Aracari Travel, even used them to help transport her 4-year-old son on his first trek in Huchuy Qosqo, Peru, where he rode a horse on the way up and was carried down the steep downhill portions by a porter.

If carrying your own gear, be sure to wear it while training to get accustomed to the weight. For younger children, Wilson says, "Always make them carry something so that they feel like they're contributing. Eventually, they'll be able to carry all their own gear."

But for today's tech-addicted youngsters, should that gear include electronics like cell phones and iPads? Wilson limits his daughters' electronics on the trail so they can focus on time with the family instead, and he believes the tradeoff has paid off. "We think the trips teach self-reliance, self-discipline, frugality, and respect for nature and other cultures. They think differently from many of their friends, and are able to work on long time horizons -- unique in a short attention span society."

Mosquera doesn't let her son bring electronics along at all, to eliminate the temptation. She suggests more old-fashioned diversions. "Bring cards to play after dinner as a group. Make sure you prepare to stargaze. Read stories. Bring marshmallows so you can make them in the fire. Make popcorn."

These are the types of big lessons and small delights that make trekking a worthwhile pursuit at any age.

Says Wilson: "My older daughter, Winter, now has suggested that she wants to complete one long trail each summer of her college years. We'll see about that, but at least she considers the possibility of such challenging, life-altering trips."

Travelzoo Tip: With this exclusive deal, venture to Nepal to explore Kathmandu, Pokhara and Chitwan on a seven-night land-only tour for $469 per person and save 55% or plan for a Everest Base Camp trek.

-- Kelsey Rexroat is an editor at Travelzoo and based in New York. Travelzoo has 250 deal experts from around the world who rigorously research, evaluate and test thousands of deals to find those with true value.