For years, the U.S. egg industry has been telling us that there is no connection between salmonella outbreaks and the practice of cramming layer hens into cages so small the birds can't lift a single wing. It's been their party line for so long they've probably begun to actually believe it. Earlier this year, the leading U.S. egg industry trade group announced, true to form, that caging hens is "better for food safety."

With more than 95 percent of all U.S. eggs currently coming from caged hens, and salmonella outbreaks sickening more than one million Americans every year, this isn't merely an academic debate. Salmonella poisons people, causing a nasty, painful disease that can be fatal to the very young, the elderly and anyone with a weakened immune system.

As you've probably heard, we are now in the midst of the latest in a long series of salmonella outbreaks caused by bad eggs. More than 500 million eggs have been recalled in the last two weeks. And once again, industry representatives are claiming the problem has nothing to do with the practice of housing hens for their entire lives in cages where they are barely able to move. Anyone who would tell you otherwise, they say, is probably an animal rights zealot with a hidden agenda.

But wait a minute. The editor-in-chief of the trade journal Egg Industry is certainly not what most people would call an animal rights advocate. What is his opinion of the industry position that squishing living birds into tiny cages has no bearing on public health? Such claims, he wrote recently, not mincing his words, are "invalid... unconvincing, unsupportable and easily refuted."

Though his remarks might not be popular at the next gathering of egg industry moguls, they are in fact correct. There have been nine scientific studies published on the issue in the last five years in peer-reviewed journals. Every single one of them has found increased salmonella rates in eggs coming from facilities that confine hens in cages.

Summing things up, an article earlier this year in World Poultry, aptly titled "Salmonella Thrives in Cage Housing," found that eggs from hens kept in cages consistently carry an increased risk of salmonella.

This morning, the Humane Society of the United States (HSUS) began an ad campaign pointing out that every one of the more than half a billion eggs involved in the current recall came from hens crammed into cages. The practice of forcing egg-laying hens to live their entire lives in tiny cages isn't just an animal welfare concern, say the ads. It is a public health issue. Housing hens in cages so small they can't take a single step is not just inhumane. It is a public health menace.

Should we be suspicious of the HSUS? The group is, of course, fundamentally an animal protection organization. But does that automatically mean they are stretching the truth? Not according to a study published in the American Journal of Epidemiology. The study suggests that by switching to cage-free production systems the egg industry would likely reduce the risk of salmonella to the American public from bad eggs by 50 percent. 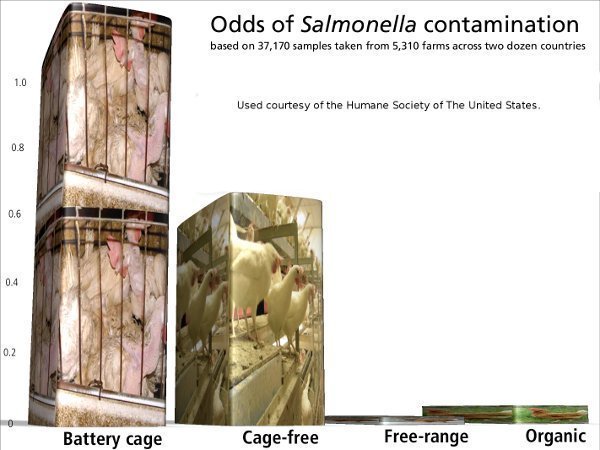 How do you think the egg industry is taking all this? They frankly would just as soon not be bothered. They are doing quite well with things just the way they are, thank you very much.

Are they afraid of being held financially accountable for the damage to human health caused by their tainted products? No, because they know that America's food safety systems have been superbly designed not to protect public health, but to protect agribusiness from liability.

So why rock the boat?

Except that the boat is already rocking. As of January, 2012, it will be illegal to house laying hens in cages anywhere in the European Union. In the U.S., the states of Michigan and California have already passed laws phasing out the practice of confining hens in cages. In California, Governor Arnold Schwarzenegger has signed a bill requiring that all whole eggs sold in the state be cage-free by 2015. And other states are considering similar legislation.

The egg industry defends the status quo by threatening that healthier eggs from better treated birds would be vastly more expensive, and thus would mean more malnutrition among the poor. It's a powerful argument, except it's not true. If you factor in the economies of scale, going cage-free need add only about a penny an egg to the retail price.

This is why a number of major fast food companies, including Burger King, Subway and Wendy's, and retailers including Trader Joe's, Safeway and Wal-Mart, have made various levels of commitment to purchasing or selling cage-free eggs. And why major food companies like Hellmann's mayo, which uses 350 million eggs a year, have announced they are going 100 percent cage-free.

McDonald's in the U.S. has been a little slower to get the message. One of the burger giant's executives recently said he didn't think hens "should be treated like queens." But does going "cage-free" mean the hens will be treated like royalty? Far from it. Cage-free does not mean cruelty-free. But at least cage-free hens will have two to three times more space per bird than caged hens. And unlike caged hens, they will be able to stand up, fully extend their limbs, lie down and turn around.

From an animal welfare point of view, cage free eggs are far from perfect, but they are better. And from a public health perspective, cage-free eggs are a necessary and urgently needed improvement.

2) If you are going to eat eggs, seek out organic and free-range eggs.

4) Don't spend extra for brown eggs. They aren't any more nutritious than white eggs, they are just from a different breed of hens.

5) Don't be fooled by eggs that claim they are produced without "added hormones. That sounds nice, but is meaningless. No hormones are currently approved for use in U.S. egg production.

6) Beware that the egg industry has been eager to co-opt the language of humane farming. As awareness of the horrors of egg factory farms has been growing in recent years, the industry trade group United Egg Producers responded, not by improving conditions, but by labeling cartons of eggs "Animal Care Certified." In actuality, this "certification" was only the industry's misleading attempt to whitewash its tarnished image. After legal action forced them to remove the meaningless label, the industry came up with yet another bogus attempt to hoodwink the public. Egg cartons that say "Produced in Compliance With United Egg Producers Animal Husbandry Guidelines," are designed to help you feel safe and confident as you purchase eggs that come from filthy disease mills, including the very facilities whose salmonella-infected eggs are the target of the current recall.

7) Users of craigslist may have seen the warning: "Deal locally with folks you can meet in person. Follow this one simple rule and you will avoid 99 percent of...scams." This principle applies to eggs, too. If you are going to eat eggs, try bypassing the supermarket entirely, and get them from local farmer's markets. To find one near you, see Localharvest.org.

At the moment, cage-free, free-range and organic eggs are indeed more expensive. Are they worth the added cost? That's up to you to decide. But the more you learn, the more able you are to make informed choices. When you include the risk of salmonella poisoning, when you take into account the differences in flavor and nutrition, and when you factor in the degree of animal cruelty involved, getting away from eggs that come from concentration-camp chickens starts to seem less like a luxury. The more you know, the more it seems like an ethical and health imperative.

John Robbins is the author of The New Good Life: Living Better Than Ever in an Age of Less. His other bestsellers include The Food Revolution and Diet For A New America. He is the recipient of the Rachel Carson Award, the Albert Schweitzer Humanitarian Award, the Peace Abbey's Courage of Conscience Award, and Green America's Lifetime Achievement Award. For more info about his work, see johnrobbins.info

Author, 'The New Good Life: Living Better Than Ever in an Age of Less'