When the CIA recently -- finally -- released a declassified report confirming the existence of the once-mythical Nevada military base known as Area 51 -- aka Groom Lake -- it also opened the door for many little known stories to emerge about the goings-on at the still-top secret installation.

Many people think Area 51, pictured below, about 100 miles northwest of Las Vegas, Nev., houses the hidden technology of captured extraterrestrial spacecraft as well as the remains of the alleged unfortunate drivers of those ships.

What the public now knows, officially, is that Area 51 is where the CIA spent decades developing high-altitude spy plane technology during the Cold War. 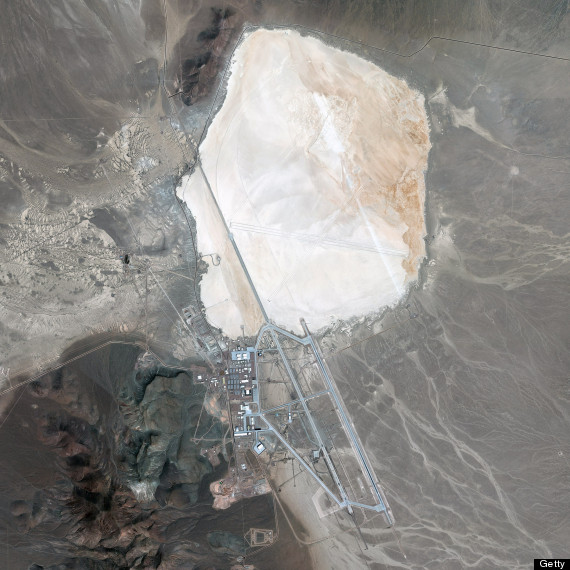 Little known to the public was how Soviet-built MiG jets -- captured from previous aerial conflicts -- were brought to Area 51, reengineered and used in simulated combat dogfights with American jet fighters.

"Actually, I've been to Area 51 -- I flew out there, back in the days when I was in the Navy, flying F-14 Tomcats out of Naval Station Miramar in San Diego, around 1975," former distinguished Air Force and Navy pilot Allan Palmer told The Huffington Post.

"We spent some time in the desert up there doing aerial gunnery. We'd go out to Naval Air Station Fallon [in western Nevada]. They said, 'Look, at the end of your flying time, go out here on this radial and DME mileage from the station and just orbit there and wait for further instructions.' So, we'd go out there and check in on our frequency at this place we were supposed to be at over the desert.

"Well, it was a MiG, and so we'd go join up on him and fly along with him, and then we'd split up and do simulated combat for a couple of turns. And that was over Area 51 -- right over the top of the base out there at Groom Lake -- the big dry lake, you couldn't miss it. And that's where we ended up doing a few combat turns and air-to-air dogfighting with the MiGs. We did that a couple of times and it was always very interesting."

Palmer said he recognized the MiGs from his earlier, intense combat missions over North Vietnam.

"[The MiGs over Area 51] were reengineered and they had U.S. stars and bars on them. I remember that very distinctly. It was a very odd thing because I'd seen a couple in combat in Vietnam with Vietnamese insignias instead and it scared the daylights out of you."

To get an idea of what a dogfight is like between an F-14 pilot and a Soviet-built MiG, watch this video from 1989:

During the simulated, top secret dogfights over Area 51, Palmer had a good idea about the identity of the air base below him.

"I could see in the distance the lake bed and the runway and the hangars, and we would go, 'Ooh, that's where all that secret stuff is going on down there.' But that's about as much as we knew. Everybody talked about it among ourselves in the squadron pretty openly. We'd say, 'Oh, that's Groom Lake, that's where the A-12s were flying, the U-2s, and now there's the MiGs out there.' Yeah, we knew all that, and then, of course, what else beyond that, we really didn't know.

"It was common knowledge among us as we were flying out there, but of course, we didn't talk to anybody else about it, or at least shouldn't have. But, like anything else, if it's that casual among people who are engaged in that business, some of it is bound to leak out in conversation at a bar or over a picnic table somewhere where maybe somebody else is listening in. So, word started getting out in the public in spite of the deep compartmentalization of that story -- it still was getting out in pieces, here and there."

Even six years ago, you could have read about what was going on at the military base that didn't officially exist. All you had to do was pick up the April 2007 edition of Air Force Magazine: The Online Journal of the Air Force Association, where you'd find an article detailing the stolen MiG fighters and secret Nevada desert airfields:

"Neither current nor former Air Force members will discuss how and where the U.S. obtained the Soviet-designed aircraft. However, that information remains classified.

"The squadron's very existence was highly classified. Exercise participants all pledged in writing to keep quiet about the MiGs, on pain of losing their careers. The aircraft themselves were routinely shunted indoors or sent aloft at times when U.S. intelligence calculated Soviet spy satellites would not be overhead."

These days, Palmer, 70 (pictured below right), is executive director and CEO of the National Atomic Testing Museum -- a Smithsonian affiliate museum located in Las Vegas. 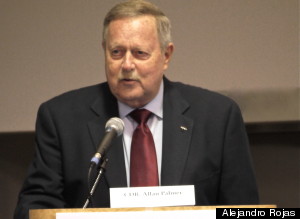 In March of 2012, under Palmer's authorization, the museum took a bold step by unveiling a new walk-through exhibit, "Area 51: Myth or Reality."

The popular exhibit presents historical records of the activities and research conducted at Area 51, which was still classified when the museum exhibit opened last year.

Adding to the controversy of the exhibit are sections dealing with the public speculation that the military was testing alien spacecraft at the secret desert facility.

Despite the declassification of specific information related to Area 51, Palmer says the activity and secrecy is ongoing out at the military site.

And Palmer has decided to expand and extend the Area 51 exhibit at the National Atomic Testing Museum for at least another year.