When the National Atomic Testing Museum of Las Vegas opened its "Area 51: Myth or Reality" exhibit two years ago, it became an instant hit. It wasn't just the only place that had a comprehensive knowledge of Area 51 -- it gave a venue to former employees of America's top secret military base to present their involvement in declassified projects.

Today, the museum is expanding.

"Area 51: Myth or Reality" is re-opening its doors today to give the public more of the truth about one of the most secretive military installations. After all, Area 51 is the same facility that spawned America's stealth fighter technology as well as decades of speculation about the alleged testing of recovered UFOs. 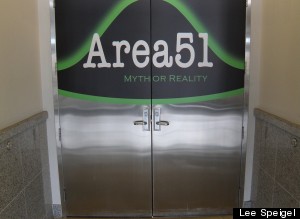 "It's fair to say that an awful lot of people were very skeptical of us presenting anything that had to do with UFOs and space travel and aliens. But I felt compelled to at least address that part of the story in this Area 51 exhibit, so that became a big part of it," said museum executive director and CEO Allan Palmer.

"We've added some really interesting elements to the exhibit that weren't there before -- some extra artifacts, a different look and feel to make more of a definition between the myth and reality sides of the exhibit. We wanted to create the experience for the visitor of going through Area 51, first of all, just knowing what it is and getting a little bit of in-character view as you walk in, a briefing by the guards, admonishing you not to tell anybody about what's going on and keeping it to yourself."

The National Atomic Testing Museum -- one of a handful of national museums -- is the most logical place to house an exhibit devoted to Area 51, which is located about 100 miles north of Las Vegas.

The museum contains more than 12,000 artifacts related to the history of the development and testing of nuclear bombs.

Up until 1989, the public didn't know much about Area 51. There were reports of strange-looking lights in the sky in the general vicinity of what's now known as a military installation, but that's about it.

During that year, KLAS-TV news reporter George Knapp publicly broke the Area 51 story after an interview he conducted with Bob Lazar, who claimed to be a government physicist performing research on recovered alien technology at the top secret Nevada military base. Lazar's story included allegations of a campaign of intimidation against him.

Palmer, who also hosts a weekly Las Vegas-based radio program, "Myth or Reality," on KXNT-FM, told HuffPost he was all set to dismantle the Area 51 exhibit after its first two years, but thought better of it.

"It was so successful and was filling a need and a gap that existed. Nobody else really has dealt seriously with that whole business of Area 51 and UFOs and aliens that go with it, so we really felt obligated to do it, and at the end of two years, people still wanted to see it. It still has broad appeal, not just here in the museum, but throughout America and internationally, so we decided to change it a bit to make it more interesting, user-friendly and exciting, and I think the public is going to be really thrilled when they see what we've done with it."

The exhibit features an alleged "authentic alien artifact" -- small pieces of material that came from a reported 1986 UFO crash in Russia.

Also on display are unique UFO photographs from the personal collection of Robert Bigelow, founder of Bigelow Aerospace, that is creating the next generation of spacecraft.

Palmer personally selected Bigelow's UFO images to include in the Area 51 exhibit.

"What's remarkable about them is that they were original negatives -- not prints -- they were negatives that we made prints from, so we know they were not doctored, they're all pre-Photoshop. These are photographic images of UFOs from around the world, going back to the 1940s up through the 70s. In some of the images, you can see that they may be confused with some naturally occurring phenomena, but there are others that are clearly not."

Watch this week's follow-up KLAS-TV report about Lazar and Area 51.

Click HERE for an excellent zoomable image of Area 51.

And click here for more information about the re-opening of the Area 51: Myth or Reality exhibit.