When the Area 51 exhibit officially opens today at the National Atomic Testing Museum in Las Vegas, visitors will see something that may startle them: a display titled "Authentic Alien Artifact." (See photo above.)

"Area 51: Myth or Reality" presents the historical records of what's been considered the most secret place in America. Spy planes, like the U2 and A-12, were routinely tested at this abandoned bombing range 80 miles north of Las Vegas during the 1950s and 60s. Models of these and other stealth aircraft are now on display at the museum.

The exhibit also scrutinizes ongoing speculation that the military was testing captured alien spacecraft at Area 51 and examining the remains of extraterrestrials that had reportedly crashed outside of Roswell N.M., in 1947.

The Area 51 presentation isn't limited to examining American UFO sites. Under a clear display cover -- where the "Authentic Alien Artifact" sign is housed -- are a variety of objects, including vials containing small pieces of material. These come from an alleged UFO crash in Russia.

The use of the word "authentic" is a pretty bold assertion, considering the exhibit -- the first of its kind in a national museum -- is in a museum associated with the Smithsonian Institution. 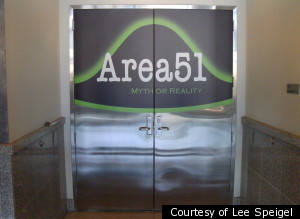 These so-called alien artifacts come from an incident known as the Russian Roswell. On Jan. 29, 1986, an unusual-looking reddish sphere streaked across the sky over the Soviet Union mining town of Dalnegorsk and crashed into Mount Izvestkovaya, also referred to as Height 611.

"Valeri Dvuzhilini of the Academy of Sciences was first to arrive on the scene two days later. He collected samples of strange metallic mesh scattered at the site, and samples of rocks and vegetation which had been scorched in the crash," said Las Vegas KLAS-TV news reporter George Knapp.

"Samples were later analyzed by several Russian scientific institutes. In the days after the crash, hundreds of witnesses saw other UFO-type craft flying in and around Height 611, as if searching for the crash site," Knapp told The Huffington Post.

Through his efforts and contacts between the United States and Russia, Knapp -- the recipient of more than a dozen Emmy Awards -- was the first American journalist to travel to the UFO crash site in the 1990s.

Knapp, pictured below right, was given samples of the debris, including very small perfectly round and glassy spheres, which had also been found at other crash sites. Those materials are being unveiled by the National Atomic Testing Museum. 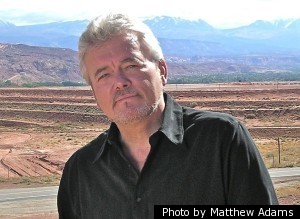 According to the exhibit's description, scientific tests on the UFO materials revealed bizarre behavior: "Three Soviet academic centers and 11 research institutes analyzed the objects from this UFO crash. The distance between atoms is different from ordinary iron. Radar cannot be reflected from the material. Elements in the material may disappear and new ones appear after heating. One piece disappeared completely in front of four witnesses. The core of the material is composed of a substance with anti-gravitational properties."

"I don’t think the Russian scientists ever said it was out-of-this-world, but it had unusual properties. Some of the stuff went to academies and it never came back," Knapp added. 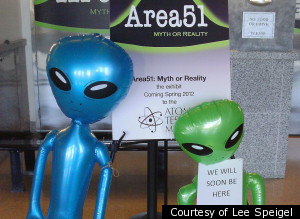 With the opening of the Area 51 exhibit -- which reveals the secret work that went on there in the development of military stealth technology -- is there also the implication or suggestion that the government is ready to acknowledge that some UFOs may have a truly out-of-this-world origin?

The overall Smithsonian mission includes "shaping the future by preserving our heritage, discovering new knowledge, and sharing our resources with the world." Now it appears that statement includes possible debris from a crashed UFO.

Maybe this Area 51 "authentic alien artifact" display is another step forward on the road to ET disclosure.