The two dogs in the photo below were dropped off at a central Florida animal shelter within a day of each other. They became instant best friends.

"They are still connected at the hip. They walk side by side," says their new mom, Ronda Chewning. "They even eat side by side." 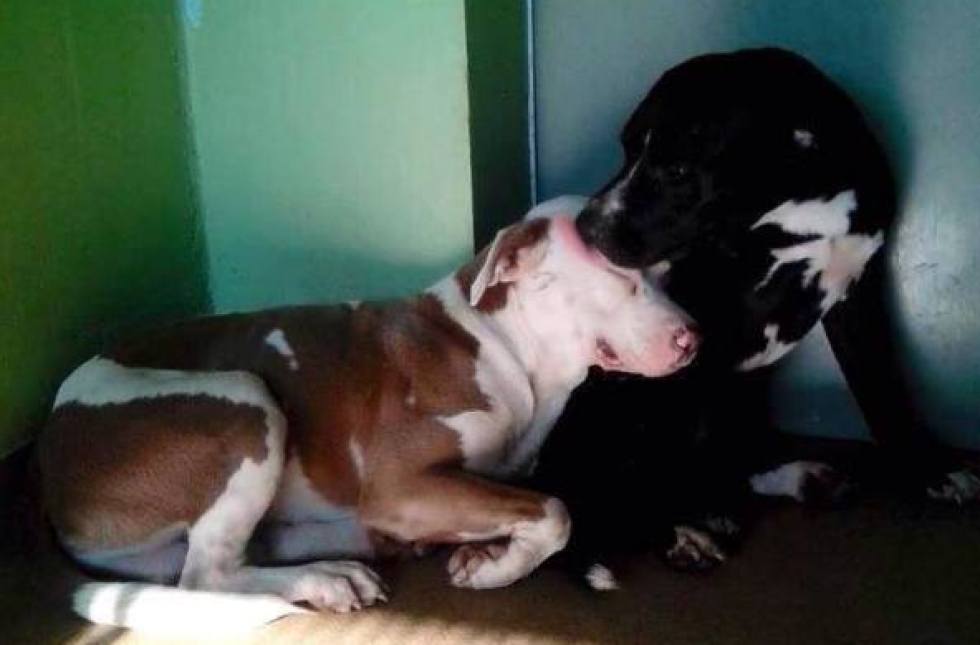 This photo of the dogs in the Florida shelter went viral after Second Chance Rescue posted it to their Facebook page.

Chewning says she'd never been involved with the animal rescue community before seeing the photo of the boys -- the tan one was called Darby at the time; the black-and-white dog hadn't been named yet -- on the Second Chance Rescue Facebook page.

It was the end of August, and the 3-year-old dogs' situation was described as "urgent." They were scheduled to be euthanized in early September if no one were to take them home.

"I had no plan to get any dogs, let alone two," Chewning says. "We live on a tight budget, and two dogs weren't in the budget."

But Chewning, who lives in Orlando, felt what she describes as a kind of divine sense that she ought to get involved. That, and when she posted to Facebook that she was going to check on Darby and his nameless friend, she got a lot of messages of encouragement -- and promises to help, financially.

"Everyone said get them, they would donate," she says. And they have. She's raised more than $2,100 so far toward the dogs' medical bills, which are extensive, since there's been tests and antibiotics and one dog has already tested positive for heartworm.

On Sept. 4, the dogs -- now named Ares and Zeus after the Greek god of war and the father of gods, respectively -- came to live with Chewning and her daughter Jamie (initially the arrangement was supposed to be temporary, though Chewning says she's "really torn now" about the prospect of ever giving them up to another home).

"The big dogs were OK with our little dogs, and the little dogs welcomed them home," Chewning says.

Overlooking one little incident with a chewed-up sandal and a bit of initial shyness, it's been a smooth transition.

Within a day, her new dogs had begun to come out of their shell. And now, Chewning says, "they stand on their hind legs and almost hug you and give kisses. They even come to you and like to be held."

She is grateful for whatever human or otherworldly forces brought these dogs together, and then to her; she is grateful to the many people who are helping her to pay for Ares and Zeus' vet bills. She also hopes her growing collection of canines, and their growing number of online and in-person fans, will inspire others to adopt a new furry friend of their own.

"The boys' kill date was last Friday," Chewning says. "They are beautiful, gentle and loving dogs. What a waste if they had been put down."

Debbie Cardenas, who volunteers at the shelter where Ares and Zeus lived before Chewning took them home -- and whose boyfriend Daniel Castro took the original photo, she says -- tells HuffPost that she's upset, among other things, at what she sees as money being diverted from helping other animals.

"It would be nice if they donated some of that money to the local rescues that have been working hard to save these dogs," she says. "Shelter dogs are amazing and deserve to be given another chance. Before going to breeders people should check out their local shelter and find their new best friend."

Chewning has responded to some of the more personal attacks against her and her daughter on the Ares and Zeus Facebook page.

She's said to HuffPost that "we will donate to local rescues in [the dogs'] honor. I wish they would understand, this is the way I see it: let them donate, we will pay it forward. If not no one will get donations."

You can follow Ares and Zeus' new life on their Facebook page, which also has more information about donations. And get in touch at arin.greenwood@huffingtonpost.com if you've got an animal story to share!