South America's premier destination knows a thing or two about pairing fine food and award winning wines. They also know how to wow a tourist with the best of both. Argentina provides that perfect travel balance with a pair of destinations that are sure to seduce all the senses and sate any travel palate. 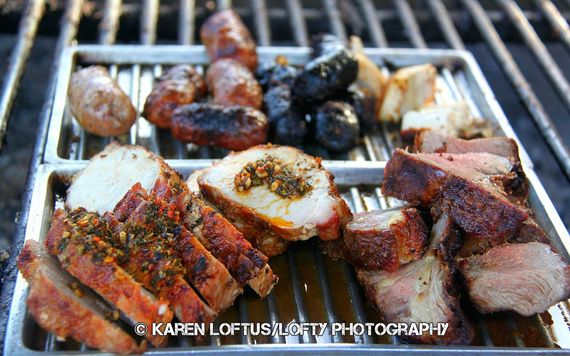 So, next time you are hungry for some serious southern hospitality, head to Argentina and load up on an ample serving of both Buenos Aires and Mendoza. Rest assured no matter how full the forks and corks and cultural offerings may leave you, you will leave Argentina begging for more. Here's a small taste of what you can expect if heading in that decadent destination.

It's the second largest city, second only to Brazil's Sao Paolo in South America. From art and architecture to their turbulent historical history and an unrivaled café and culinary culture, Buenos Aires is can't miss for savvy and sophisticated travelers.

Once you arrive, take up residence at the French and Art Deco designed Sofitel Hotel. Set in the city's art district by many embassies in the city, this neoclassical structure will give you a window in to what Bueons Aires was like in its celebrated hey-day. 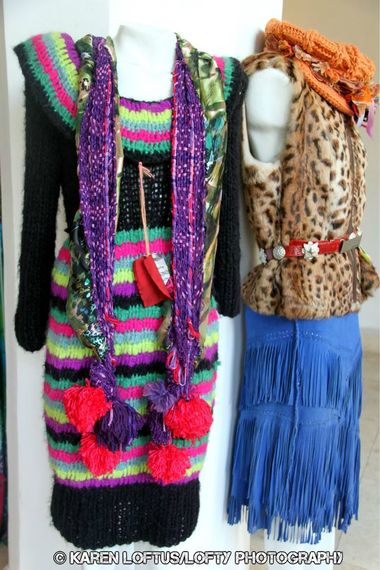 If looking for a boutique experience, head to the iconic Algodon Mansion to see and be seen by the urban elite. You can do lunch, grab a rooftop cocktail or get one of the best spa services in the city. I was dreaming and drooling in no time after my relaxing, yet youth infusing facial.

For an artful appetizer, indulge in Fortabat where lunch can be enjoyed at the on-site restaurant. Or opt to hit the streets along with the Portenos, the chic elite of Buenos Aires. Grab a steak sandwich on the go, drizzled with chimichurri sauce at one of the local parillas. Then head to Palermo Soho to do some damage at those chic shops. Cocktail, culinary and couture abound in this ever-trendy outpost. 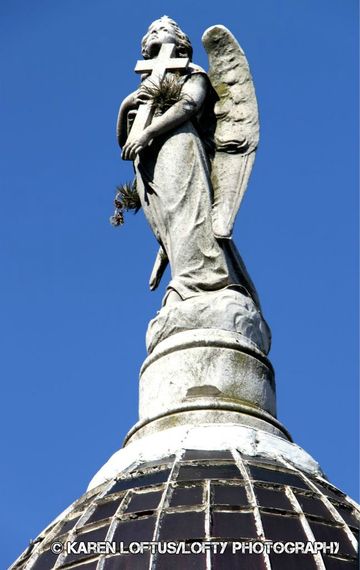 Finish your visit in the tony neighborhood of Recoletta. Enjoy a long and luxurious coffee at one of the city's classic cafes, yet another glance back to old world Argentina. Pay your respect to Eva Peron at one of the world's best cemeteries. It's best to arrive late in the day at Recoletta when the lighting is pitch-perfect and highly evocative.

On our final night in, we partook in the celebration of Argentina's most celebrated grape during their annual Malbec World Day where Argentina's top winemakers toasted their local star. This event is happening in key, eno-inspired cities simultaneously, all over the world. We were just fortunate to be with the Portenos celebrating like a local.

Mendoza
The first things you see as you drive away from Francisco Gabrielli's International airport in Mendoza are the vines on their lot. So, if you didn't know you were deep in wine country when you arrived, it becomes crystal clear once you exit the airport and kick-start your eno-inspired adventure. 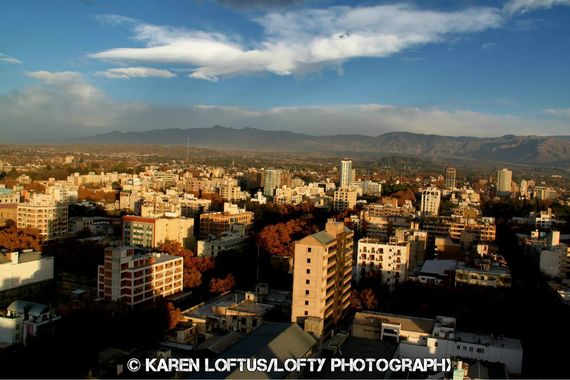 Coined the Napa of South America, the fifth largest wine region in the world is producing two thirds of Argentina's wines. There are other grand regions in Argentina, from San Juan and La Rioja and Patagonia to several other smaller regions. Mendoza's just the mightiest with vineyard acreage greater than New Zealand and Australia combined.

Malbec, originating from France is very different from its French relatives. It is the region's definitive red and the most widely planted. Equally distinctive in the Mendoza portfolio is Torrontes, the only grape wholly indigenous to Argentina with its Muscat-y fragrance with hints of peach and citrus, yet spicy on the palate. It stands up well to the Argentinean smoked meats, which abound in town. 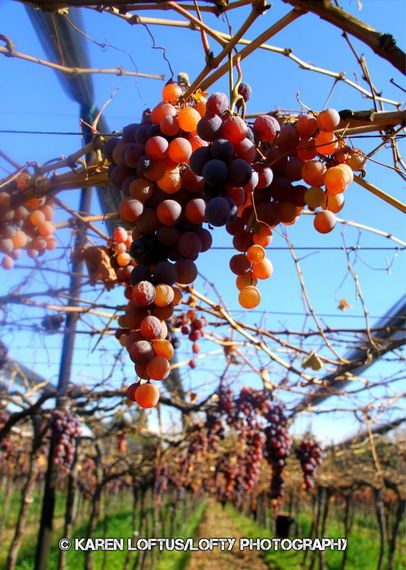 Anxious to get in to the forks and the corks, we checked in to the fairly new business savvy Intercontinental Hotel in Mendoza. We didn't waste a minute as we then headed straight to the wineries. It was clear within minutes of our visit that the agri-tourism in Mendoza was more robust than ever.

We had a leisurely lunch at Bodega Vistalba's award winning La Bourgogne Restaurant. It is one of the properties in town offering accommodations on site, a very evocative proposition as it can take an hour to get from Mendoza's city center to the wineries.

Visits continued at the Dutch owned Salentein winery, home to Killka restaurant and one of the most celebrated art galleries in all of Mendoza. Local art and artists are highly revered widely throughout Argentina and very much so in Mendoza. The only competition to the art is the backdrop of the picturesque Andes Mountains. The Andes frame the modern property, making the architectural wonder pop, causing it to look like a rather impressive, site specific art installation. 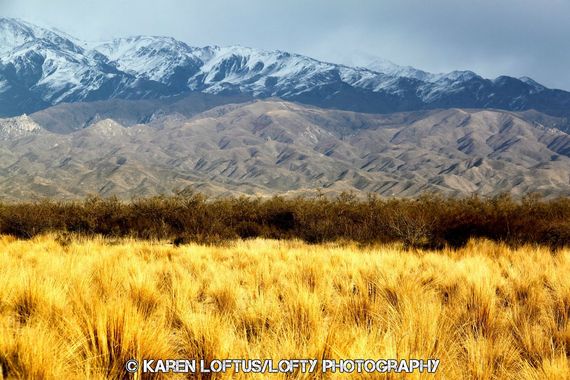 Kicking off our next day of eno-activity was a visit to the family owned and run Zuccardi Winery. My previous visit in '09 had me pruning their vines. This visit I continued in the work vein harvesting my own olives, which we later pressed. Taking a bottle of my own oil back may be one of my best travel trophies to date. Lunch at their newer restaurant Pan & Olive was a great way to celebrate the harvest to table trophy. The food was traditional; simple yet sublime.

That evening we broke bread at Nadia OF Restaurante in Mendoza's city center. The noted Nadia Haron's husband, Jose Manuel Ortega of O. Fournier Wine Group joined us for the meal.

Ortega meticulously paired his gorgeous award winning wines throughout the sumptuous meal. The restaurant was teaming with foodie fans as the seemingly bohemian Nadia had just been given the top chef award in Argentina. It was easy to see why. We were privy to the Spanish native's four-course degustacion, an El Bulli-like experience. The influence was obvious, yet her own. 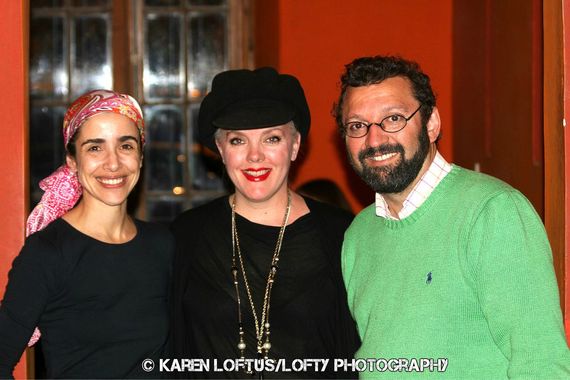 With husband Jose's financial background, I felt I was being given insider stock info as he shared the wineries newest offering. His winery was selling both wine villas and plots. You could buy a plot and they would harvest the grapes, make the wine and sell your wine for you with your own label on it.

This was at a very low risk. You soak up his years of expertise and set up costs, which could then lead to you pouring your own world class wine first time out. It is an otherwise unheard of option at such a low cost. The return on the minimal investment was seemingly, quick and easy. I was shaking the change out of the bottom of my purse to explore my own eno-options.

Even more enviable than the financial fun was the notion of having your own label. We're told that tip-top investors and jetsetters from around the globe that have been there, done that, own that, were jumping in, hand over vine to get in on the vintner activity.

As Fournier mentioned, "What is more impressive than pulling out your own wine at a business dinner?" Hard to argue as vintner visions were already dancing in my head. We were led to believe that he was the only vine in town with this groundbreaking grape offer.

Once we arrived at the idyllic Tupungato Winery the next morning, we were told that Tupungato like O. Fournier had wine plots and wine villas on offer as well. It was becoming a point of practice in the region. Not only that, Tupungato also had golf and polo villas for sale, which paired up nicely with their golf course and polo fields.

True to form, I was leaving Argentina with an even greater appetite for their grapes and plates than when I arrived. In addition, I was busy placing my order for my next visit in.

Next time back, I am ordering a villa with my wines. Now back to shaking out that purse...