The town of Argleton, England doesn't exist... except on Google Maps.

The fake village caused a media blizzard back in 2009, when conspiracy theorists noticed it on Google Maps, right near the real British town of Aughton. Google responded to The Telegraph, thanking them for pinpointing the error and promising the map would be "updated at a later date."

So why is Argleton STILL here five years later?

The most likely explanation is that Argleton is Google's version of a "trap street," which are basically fake streets that mapmakers often include to embarrass anyone who tries to illegally copy their map. Whereas many maps include fake streets or alleyways, it's possible that Google just threw a whole village into its maps for good measure. The signs are indeed there: "Argle" sounds strangely like "Google," and the letters in Argleton can be rearranged to spell, "Not real, G."

When Argleton was first discovered, it inspired a whole slew of fun offshoots, from "I Visited Argleton" T-shirts to Argleton pie offered in nearby restaurants (ingredients include... nothing). One budding author raised almost $5,000 on Kickstarter, which she used to write a spellbinding novelette about Argleton's dark and sinister essence.

Oh, and you can still see Argleton in Street View today. Too bad it's mostly sheep... not very dark, nor sinister. 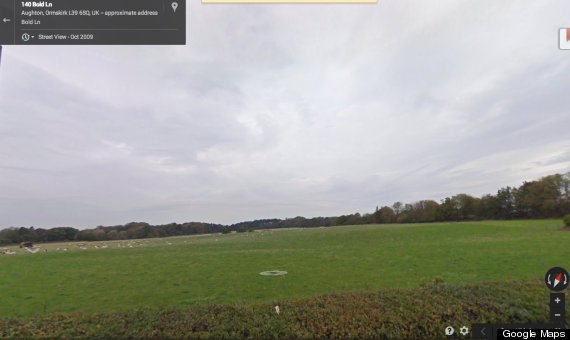 Even though we've known Argleton is a fake for years now, chances are it will never disappear completely from the Internet. It has weaseled its way into numerous geographic databases, so major sites like Yelp still list pubs, restaurants and inns "near Argleton." Travel site Travel Republic will even show you a slew of hotels if you're looking for "great deals in Argleton."

If you're really curious, feel free to visit Argleton: just hop out of your car on Bold Lane in Aughton, Ormskirk, UK. Roy Bayfield did it -- he sees the town as a fantastical realm in which the Internet demonstrates its capacity to confer meaning upon the environment.

"I started to weave this amazing fantasy about the place, an alternative universe, a Narnia-like world," he told The Telegraph. "I was really fascinated by the appearance of a non-existent place that the Internet had the power to make real and give a semi-existence."