Last week, Arianna Huffington, president and editor-in-chief of the Huffington Post Media Group, addressed the senior class of 2012 at The Nightingale School, an all-girls educational institution in Manhattan. Below is the speech she gave to the graduating class, their friends and family, and the school community.

Ms. Hutcheson, Mr. Burke, Ms. Köprülü, members of the Class of 2012: It is a great pleasure and an honor to be here with you today. And I know it doesn’t matter, and it’s not as important as everything else, but you look amazing! So, you made it –- from those of you who have been here four years to those who have been here 13 years: the survivors. Congratulations.

Ever since you invited me to be your speaker here today, I have been on a mini journey of my own, getting to know you, the class of 2012. And you are a pretty amazing group. I love your class Facebook page, “World Domination.” I love that when your debate team went to Harvard last year for a tournament, the judge told the boys’ team you were debating to “go easy” on you. And as Francesca said, “It was nice to wipe the floor with them.” And I love that during your recent class trip to Vermont, you had the choice of taking a hike through the woods or milking a cow. And the entrepreneurs among you wanted to sell the milk to those who were thirsty from the hike.

And I loved getting to know some of you personally when you came to lunch at the HuffPost newsroom. The editors you met there were trying to convince you to skip college and come work with us. Don’t tell your parents.

I already feel very protective of you, and of the spirit of optimism and adventure that you embody. And I want to make sure that nothing ever vanquishes it. Looking back at my own life, there are the things that can trip us up and dampen that spirit. The first thing is failure -- or even the fear of failure. So let me tell you about some of my own.

When I was 25 I wrote a book that was rejected by 37 publishers. By about rejection 25, you would have thought I might have said, "Hey, you know, there's something wrong here. Maybe I should be looking at a different career."  Instead, I remember running out of money and walking, depressed, down St. James Street in London and seeing a Barclays Bank. I walked in and, armed with nothing but a lot of Greek chutzpah, I asked to speak to the manager and asked him for a loan. Even though I didn't have any assets, the banker -- whose name was Ian Bell -- gave me a loan. It changed my life, because it meant I could keep things together for another 13 rejections.   And then I got an acceptance. In fairy tales there are helpful animals that come out of nowhere to help the hero or heroine through a dark and difficult time, often helping them find a way out of the forest. Well, in life too, there are helpful animals disguised as human beings -- like Ian Bell, to whom I still send a holiday card every year. So, very often, the difference between success and failure is perseverance.

At Nightingale, you've been encouraged to "take risks, to try out new ways of thinking, to test intellectual limits, and to find a unique voice." So you have a tremendous head start. But remember, life always consists of ups and downs, successes and failures. Seven years ago, I co-founded the Huffington Post. And I watched it come alive to negative reviews, including one reviewer who called the site, and I quote, "the movie equivalent of Gigli, Ishtar, and Heaven's Gate rolled into one." She called the site a "failure that is simply unsurvivable."

That’s when trusting ourselves and our own vision comes in so handy. You don’t have to buy into the negative reviews. And in fact, that’s about the time when you can use your famous laughter and sense of humor to get you through. And carry with you at all times the other Ariana’s speech about laughter. I’m so glad that the pressure if off me because there's already been one great speech by an Ariana here today. My mother also would have loved it, because one of the things she used to say to me is "Angels fly because they take themselves lightly" -- the one that's proved most useful in my life is the understanding that failure is not the opposite of success, it's an integral part of success. It is, quite possibly, the key component.

The other thing that can dampen our spirits is when things go wrong in our personal lives. And as somebody on this side of 18, let me tell you -- they often do. And things -- especially the biggest heartbreaks -- often only make sense as we look back, not as we are experiencing them.

I remember, for example, in my 20s, when I fell in love with a man I'd never actually met. I fell in love with his writing. His name was Bernard Levin, and he was writing for the London Times. I would literally cut out his columns, underline them, and learn them by heart. When I finally met him, I was petrified and tongue-tied. Nevertheless, he invited me to dinner, and I prepped for the date not by going to the hair dresser but by reading everything he was writing. I read every detail about Northern Ireland. Of course, Northern Ireland never came up on the date and we ended up being together for seven years. Then I hit 30 and I desperately wanted to have children. He wanted to have cats. So I did something that I was terrified to do: I left the man I deeply loved. So basically everything that's happened in my life -- my children, my books, the Huffington Post, the fact that I'm here speaking in front of you today -- is because a man wouldn't marry me.

Remember that, okay? In life, the things that go wrong are often the very things that lead to other things going right.

Understanding this means not letting negative experiences get in our way. And not letting that voice of doubt, which I call the obnoxious roommate living in our heads, have the last word. I realize that some of you will soon have to contend with actual obnoxious roommates, so this makes it even more important for you to silence the metaphorical one. Because that's the one that can do you the most damage. Your actual obnoxious college roommate will just borrow your favorite cocktail dress without asking and then spill red wine on it and then not even tell you, and then you're like, "Did you really think I wasn't going to notice?" But the one in your head -- she'll keep you from living out your dreams for the rest of your life. Because, as Montaigne said, "There were many terrible things in my life, but most of them never happened."

You’re about to enter a time in life that will be filled with plenty of late nights, and endless demands for your time and attention, from both devices and people. The notion of unplugging and recharging is even more important because we are living in a hyper, hyper-connected world. And that’s why I love that your head of school, Ms. Hutcheson, who was a religion major in college, is unplugging from her job and recharging by taking courses at the Union Theological Seminary, reconnecting with one of her lifelong passions.

Take it from someone who is running a 24/7 Internet company. As the technology author Nicholas Carr wrote, "There needs to be time for efficient data collection and time for inefficient contemplation, time to operate the machine and time to sit idly in the garden." So, create that garden in your life. Do not miss your life by multitasking. The easiest way to unplug and recharge is something that you are always trying to avoid: sleep. There is nothing that negatively affects my productivity and efficiency more than lack of sleep. After years of burning the candle on both ends, my eyes have been opened to the value of getting some serious shut-eye. And women have to lead the way here.

Because lack of sleep has become a sort of virility symbol for men. I was once out to dinner with guy who kept bragging about how he only needed four hours of sleep a night. I wanted to tell him that he'd be much more interesting if he'd gotten five.

When we reconnect with our selves, we rediscover our connection with others. You already know this, from your experience raising money to build a school in Cambodia, $2 at a time, through bake sales and school dances. An amazing example of the kind of small-scale engagement that has the power to bring about big, lasting change. And if you think you are too small to be effective, then you haven't spent a night in bed with a mosquito.

And the Nightingale Fair, which began in the early 1930s and is still going strong, with the goal of serving others -- from local food banks to less-fortunate schools to writing letters to overseas soldiers.

Service is in the zeitgeist. Now, "zeitgeist" is a German word almost untranslatable in English, but it does exist. And the evidence is all around us.

And I know from my daughters -- who also attended all-girls schools -- that whenever they were going through difficult times in their own lives, they found strength, connection and meaning by helping others. Years ago, for example, one of my daughters went through an eating disorder. When she started volunteering at A Place Called Home in South Central Los Angeles that helps take care of at-risk teenagers and younger children, it began to change her own sense of her problems, of how she saw herself, of her own difficulties. There’s nothing like putting your own problems in perspective.

In the 1990s I wrote a book called The Fourth Instinct, which explored the instinct that takes us beyond our first three -- our impulses for survival, sex, and power -- and drives us to expand the boundaries of our caring to include our communities and the world around us. That instinct is just as vital as the other three, but we rarely give it the same kind of attention.

Just to remind you, if you’ve forgotten physics 101: To a physicist, a critical mass is the amount of radioactive material that must be present for a nuclear reaction to become self-sustaining. For the service movement a critical mass is when the habit hits enough people so that it can begin to spread spontaneously around the country and the world. Think of it as an outbreak of a positive infection. And everyone here is a carrier, so please go out, carry this positive infection, and let’s all together reach critical mass. And you are invited to write about it on HuffPost, so that others can read about it and be inspired.

Remember your school's principles: truth, friendship, and loyalty -- including to yourself.

This moment in history demands that we stop waiting on others to solve the problems and right the wrongs of our times. So as you are leaving your beautiful school behind, please don’t wait for leaders on a white horse to save us. Instead, turn to the leader in the mirror. Tap into your own leadership potential, because the world desperately needs you. And that means daring to take risks and to fail, as many times as it takes, along the way to success -- and, more important, to re-making the world. And to do it all with more balance, more joy, more sleep, and more gratitude. Thank you so much. 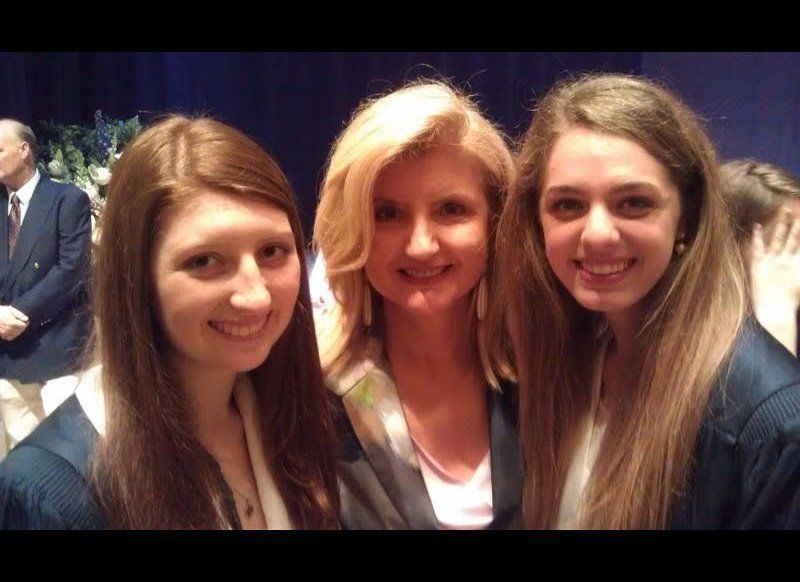