As an active professional, single mother, small business owner, chatterbox and all around energizer bunny, I'm allergic to slowing down. It just feels wrong, like shouldn't I always be doing something to further advance my life success? I feel anxious when I'm not "overdoing it." As special as I would love to consider myself, this is really a modern phenomenon. For many of us, who have convinced ourselves running around being "busy" equates to getting ahead, in truth, we're like hamsters on a wheel, not sure how we got on and too immersed in activity to jump off.

So, on a rainy afternoon in April, invited by the Women's Chamber of Miami Dade County, my journey to make this madness stop led me, a few hundred other women and a sprinkling of men to the University of Miami. It was our pilgrimage to Arianna; one of the most influential women in the world, the queen of the blogosphere, maven of media and fearless ambassador of perfectly imperfect women everywhere. We merged with hundreds of inspiration thirsty students and hurried inside the campus's Field house to learn how to slow down. 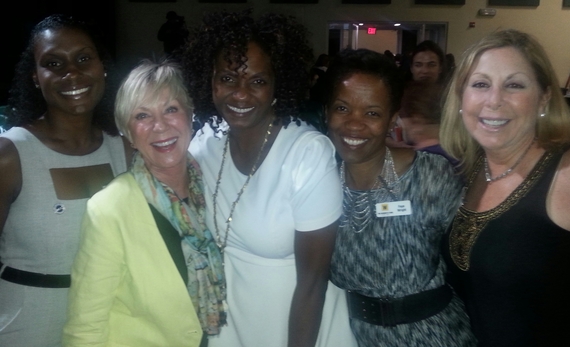 All hail to Arianna Huffington, the founder of The Huffington Post and author of THRIVE: The Third Metric to Redefining Success and Creating a Life of Well-Being, Wisdom, and Wonder, published by Harmony Books. 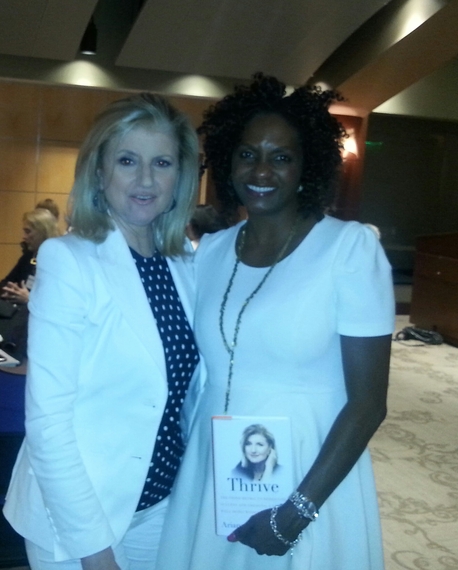 Being one of the HuffPo's gazillion bloggers worldwide, I was thrilled to actually meet her! She gave me a big hug like I was family, said I was pretty and that she liked my dress. The mark of a smart woman: compliment everyone with sincerity; it goes far, especially if you're famous. She sipped her coffee. I gushed. It was meant to be.

The program began and we immediately realized Arianna Huffington is hilarious. She is genuinely funny with great timing; that intangible comedy magic that makes people guffaw and nearly spit out their water. Five minutes into her on-stage conversation with UM President Donna Shalala, when she said her recommendation for young women and men getting out of college was to "sleep your way to the top," there was a roar of nervous laughter.

Turns out she was serious. This is the point of her new book, Thrive, a manifesto for slowing down in order to become successful, only once you change your definition of success to include well-being. In her words, some of the best ideas come when you're doing nothing, great ideas can catapult you to success, so essentially being silent will make you rich. In agreement are American business magnates like Russell Simmons, Salesforce CEO Marc Benioff and CNN anchor and Starfish Media CEO Soledad O'Brien. All have come forward as avid meditators. Most ordinary people just wanna be popular, so when something becomes hot and endorsed by the cool kids of the power structure, we all follow like sheep. Sometimes this is not a good thing -- (can you say saggy pants?), but in this case, what could be bad about chillng on a regular basis?

With rapt attention we absorbed Arianna's three baby steps to get started:

1) Get 30 minutes more sleep per night. Whatever your average is, add 30 minutes.

2) Gently escort your smart devices out of your room. They are there to harm you and maintain our obsession with constant communication.

3) Pick something that no longer serves you and let it go -- those projects that never get done, but linger in the back of your consciousness to remind you of what you haven't done, like wanting to plant bamboo in my backyard for the past eight years. How about you complete that project by just dropping it?

What we learned is we are a family of human beings, all struggling with the pressures of modernity, while knowing somewhere deep within the truth about our lives; they are precious and we, the feminine (and the guys who respect it), hold the key to giving life to a more fulfilling existence. A weary critical mass of anti-histrionics is brewing and not just because Arianna wrote a book about it and Russell Simmons said so; the science and the research are bearing it out. All of these issues of stress and burn-out have gone mainstream and that's where the magic happens

But enough mushy stuff; I write this while getting a pedicure so does this mean I'm taking her advice by relaxing, or multi-tasking yet again by editing my words while doing so? No idea, but what I do know is I'm closing my laptop now. I gotta go take a disco nap!