Two dads and their four children have dealt with months of harassment in their hometown of Gilbert, Arizona, and the LGBT community is rallying to support them.

Felix Bermea, his partner Roy, and their four adopted children have been mercilessly harassed for almost three months. It started with grafitti, then escalated to setting their bushes on fire and banging on the windows at night. Then the unthinkable happened: someone broke into their home and vandalized the children's furniture.

Throughout this ordeal, the Gilbert police department has not provided the family with the protection they need. The children are afraid to ride their bikes down the street, go outside and play, or even to sleep in their own home. The past few months have been a nightmare for the Bermeas. The harassment, the late night calls to the police, the aftermath, and the increased media attention have all made this time a less-than-ideal summer vacation.

Local authorities are under a lot of pressure by the media and our community to investigate this fully and prosecute accordingly. The LGBT community in Arizona has rallied to ensure that this family gets every protection that can be provided to them, yet their legimitate fears won't go away easily.

While we can't wave a wand and instantly make it better for the Bermeas, we can do something profound for them on a personal level -- send all six of them to Family Week in Provincetown, Mass. -- and give them the summer vacation that they missed this year. 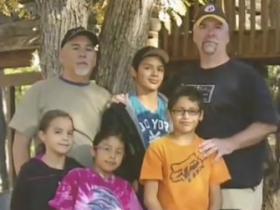 Family Week is the largest national gathering of families with parents who are LGBT in the country, and presents a unique opportunity for the family to put their troubles behind them for the moment and spend some time with a community of families just like theirs. We'll even throw them, and all families at Family Week, a parade down the middle of town.

When they arrive at Family Week, they'll find a diverse community of parents, children, grandparents, and friends ready to welcome them with open arms and, for a few moments, forget about their troubles.

Doing this would be huge step toward making it right for this family.

It won't change what happened to them, but it will show them that there are families just like theirs in all parts of our country, and that plenty of people are ready and waiting to support them.

How's that for a summer vacation?