PHOENIX -- Dozens of local mothers descended on the office of Republican Senator Jon Kyl of Arizona Wednesday to denounce what they say are sexist attitudes held by Kyl and the Republican Party in general. The demonstration was organized by Phoenix area mothers in response to Kyl's recent quip during a Senate committee meeting that he doesn't "need maternity care."

The protest was organized by local mothers, but a few fathers and children also attended. They carried signs saying, "Maternity Care Is Not a Joke" and "Women Are Your Constituents Too." 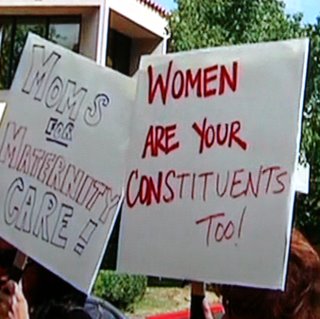 The protest comes at the same time Democrats across the country are denouncing Republican leaders for holding what they see as outdated views of women.

On Tuesday, 30 Republican senators voted against an amendment put forth by Senator Al Franken (D-Minn.), that would have barred companies that discourage female employees from filing sexual harassment suits from securing government contracts. This coincided with a press release issued by the National Republican Congressional Committee saying Democratic House Speaker Nancy Pelosi should be "put in her place."

A Democratic Party spokesperson said today, "These are not isolated incidents. This is a view and an attitude that the Republican Party has toward women," adding, "Kyl is the second highest ranking Republican in the Senate.

Representative Kyrsten Sinema, Democrat of Arizona, said at the Phoenix protest, "This is just outrageous. When Senator Kyl scoffs at the importance of maternity care, it begs the question, who does he represent?" 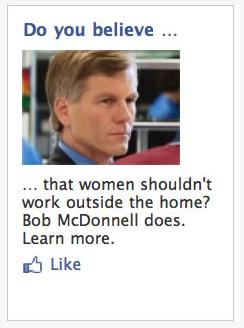 "Women all over Arizona are paying for health insurance policies that do not include maternity care," she said. "Senator Kyl and Republicans seem to be against everything these days, including something as basic as medical care after a woman gives birth."

Senator Debbie Stabenow (D-Mich.) said, "I think they have an outdated view, sometimes an extreme view, and a lack of understanding of what women's lives are like today."

The Democratic National Committee also launched Facebook ads on Wednesday drawing attention to the sexist views expressed in McDonnell's college thesis. The ads now appear wherever McDonnell's name appears on Facebook, and they link to a webpage that details what the DNC calls the "far right wing views on women and families" espoused in his thesis and votes for his dismissal as a public official.