As a feminist teacher who has worked on social justice issues in schools for over a decade, I am appalled by Miller Valley Elementary School principal Jeff Lane's decision to whiten the faces of African-American and Latino children on a mural outside his Prescott school.

Principals are educators too and there's nothing more disheartening than when a school leader doesn't step up to defend his or her own students, especially when they are being attacked by racists. I am left asking: who is standing up for these kids if the principal won't even do it?

Continuous racist epithets and comments from car drivers, Prescott community members, and Prescott Councilman Steve Blair led to a resolution from the mural committee, which includes Lane and two Miller Valley educators, to "lighten" the faces of the children of color depicted in the mural. The children in the mural are students who attend the school; the students volunteered to be models by posing for photos for artists to use as reference. 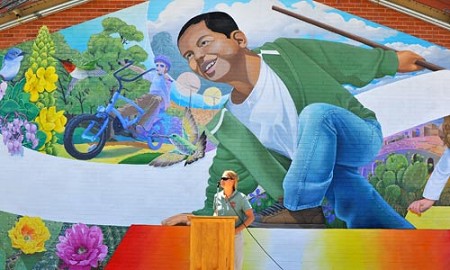 The image that has received the most attention is one of a Latino boy who figures prominently -- and beautifully -- in the mural's central frame. Councilman Blair called the Latino boy a "black guy" and further lamented that the "biggest picture" in the mural was an image of a child of color. Instead of educating Blair about his doubly racist comments about both Latinos and African-Americans and instead of defending the boy's image, Lane chose to appease the voice of racism. Prescott's the Daily Courier reported that:

"According to [principal] Lane, the committee wanted the artists to 'make them look happier and more excited, fix the scale of the faces and remove some shadowing that made the faces darker than they are.'"

Does making children of color whiter make them appear "happier" and "more excited"? Couldn't they look happy and excited as they are? But this isn't a question of looking happier or more excited. This is a matter of Lane using what he thinks is polite language (read: racist rhetoric) to say that he wants the children of color to look less threatening to Prescott racists. He wants to erase the fact that Miller Valley has the "highest ethnic mix of any school in Prescott" and make everything nice and shiny again by whitewashing them out of the picture, literally.

Would the Prescott community feel "happier" and "more excited" about the mural if the "biggest picture" in the center had been that of a white child to begin with? My educated guess is yes.

In the absence of a true anti-racist principal at Miller Valley, I offer some words here that Lane might have used to respond to and indeed, educate, the bigots of Prescott, especially Blair. Here's what he should have said:

"Fellow Prescott community members: I am proud of the 'Go on Green' mural that features beautiful images of the students who attend our school and their message of caring for the environment. In particular, I am proud of the artists' decision to honor the diversity of our student body.

On that point, I want to address some recent words said by Councilman Steve Blair. It worries me to hear an elected leader, someone to whom we should turn as a model of respect for all members of our community, use racist language when talking about our children and by extension, their parents who make up our diverse city.

When Blair says that he's 'not a racist by any stretch of the imagination' and yet claims that 'whenever people start talking about diversity, it's a word' he 'can't stand,' and that he doesn't want 'somebody forcing diversity down . . . throats,' it seems to me that what he is saying is downright racist and ugly.

As an educator and as a principal, I care about diversity. In fact, our children need us to care about diversity. They need us to care about it because they need to be seen. For if we don't see them and care about them, they will grow up to say the same ugly things that you are saying, Mr. Blair. They will grow up to feel that their country does not consider them or their families important, that others consider their cultures inferior, and that their minds and hearts are not worthy of contributing to making the world a better place. Diversity is not about shoving anything down throats; it's about shoving aside hate.

I care about diversity because it is the soul of education. Why? Because diversity changes hearts and it changes minds, it erases fear and it creates new possibilities for seeing and respecting each other. Because of diversity, our students are growing up to learn and work with one another in important ways that will change hateful attitudes and make comments like yours, Mr. Blair, obsolete.

It troubles me that Blair thinks that images of our Latino and African American children incite a 'diversity power struggle,' when, in fact, it's a mural about all of our children caring about their environment. (As an aside, Mr. Blair, you should probably know that people of color suffer from the devastating effects of environmental racism everyday).

Under my watch Mr. Blair, we will continue to shove aside hate, care about the environment, and make murals all along the way. What will you do under your watch?"