There are times when a remarkable thing happens out of the blue. Normally we dedicate ourselves to a mission, we strive towards a goal and after some time we succeed or we fail. Most of our lives are filled with such campaigns, be they completing high school or college, having and raising a family, creating a profitable business or building a professional career. Our extracurricular activities may be supporting our schools or the arts, building community and helping the needy, or being politically active as an act of public service.

But then you wake up one day and a gift is handed to you. Everything comes together, and before you've completely awakened success is upon you and the world has, just maybe, changed for good.

I believe such an occurrence happened six years ago when Prop 8 was passed in California. A rapid descent into despair was almost immediately followed by an uprising of resistance in the streets that was completely unexpected, and has born remarkable fruit six years later. Presidential support, overwhelming Democratic party acceptance with grudging Republican acquiescence, two Supreme Court victories and the spread of equality in marriage from Utah to Texas to Kentucky in what feels like a nanosecond.

This week it happened again. Barely a week ago few had heard of SB 1062 in Arizona, the "Gay Segregation" bill, what some were calling a "Jan Crow" law after the state's Governor, Jan Brewer. Once again Arizona was showing its intolerance to the world, as it had shown decades ago in opposition to the Dr. King holiday (which cost their economy hundreds of millions of dollars), and subsequently in its "Show me your papers" law (SB 1070, signed into law in 2010) and an attempt to deny trans persons access to the appropriate bathrooms. Once again the LGBT community was under attack in this country, and it seemed that this could be a mode of attack that, if successful, would spread across the country and undermine decades of anti-discrimination work.

Within hours of the news appearing online it went viral, and gay activists went to work in their virtual war room. The rapid response squad was reminiscent of Governor Clinton's team of James Carville and George Stephanopoulos back in '92, and by this past Wednesday Governor Brewer was vetoing the bill. The woman who stuck her finger in President Obama's face two years ago defied her Republican legislature and said, "After weighing all of the arguments, I have vetoed SB 1062 moments ago."

Just one day earlier recent Republican Presidential candidate Mitt Romney and former House Speaker Newt Gingrich had called on her to veto the bill, following U.S. Sens. John McCain and Jeff Flake, Phoenix Mayor Greg Stanton, the Arizona Chamber of Commerce, Apple, Intel, American Airlines, Petsmart, and the Arizona Super Bowl Host Committee. Earlier three Republican Senators who had voted for the bill recanted, saying, "We feel it was a solution in search of a problem."

What began as a "Religious Liberties" bill quickly turned into a "Religion as License to Discriminate" bill, one targeting the LGBT population but which would have given anyone, or any business, the right to discriminate based on some nebulous definition of religious conscience. Not that everyone truly understood. In a glaring example of how words matter and which newspaper you read makes a difference in how you ultimately process information, we saw the following tweet: 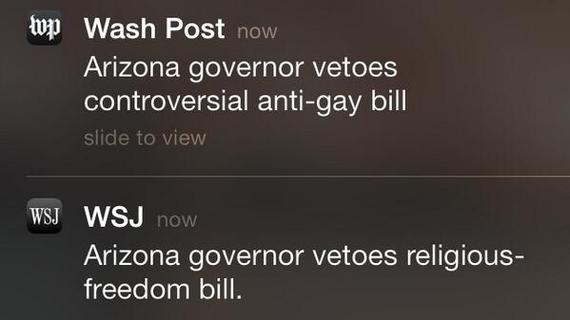 So it seemed to end almost as quickly as it began. One friend said, "It's dead. Wasn't that fun?" So, what now? What lessons did we learn?

Most Americans believe that discrimination against LGBT persons is already illegal on the national level even though only transgender persons are protected under Title VII and gay persons are still waiting for the House to take up the Employment Nondiscrimination Act, Senate passage having occurred last October. Most Americans, including Arizonans, believe it is un-American to discriminate against anybody, and they repeatedly poll that way. And when a campaign centered around a single, emphatic word -- Veto! -- the masses got mobilized, grasstops as well as grassroots, business and politicos, Republicans and Democrats, and even athletes (next year's Super Bowl is scheduled for Phoenix).

Yet ENDA still languishes, and so-called "religious freedom" bills are being considered in other states, such as Georgia and Mississippi. Why, if most Americans reject discrimination, do their elected legislatures support it? And, in particular, that means the Republican-controlled House of Representatives. Clearly such laws are increasingly being viewed as bad for business, with the case being made in a flash over social media. Why can't we get the Congress to act?

I see two major reasons. One is that it is much harder to explain in pithy terms that will fit on a bumper sticker or tweet why you are in favor of something, such as employment protections, rather than opposed to a particular bill. Shouting "No!" is often all you need, but shouting "Yes!" requires completing the sentence, "Yes, I support employment protections because..." Negative campaigning is always easier than the positive kind, which is why we have more of it.

The other is that with most things political, it comes down to relationships spread across the legislature in question and important members of the community. If a legislature, such as the U.S. House, is in a bubble, insulated from community input, then it will be unresponsive. Gerrymandered state legislatures have convinced themselves they can act with impunity. I remember the anti-war demonstrations of my youth, when President Nixon holed up in the White House and only occasionally caught glimpses of the demonstrations passing by on the Mall. It took a self-immolation by Norman Morrison outside Robert McNamara's office at the Pentagon in 1965 to break through his bubble and make an impact on the Secretary of Defense.

I hope future acts of courage can be more readily done via Twitter, but looking around the world, from Pussy Riot at Sochi to the fires of Kiev and the anti-gay witch hunts on the African continent, my optimism is tempered. Still, I believe we can take hope from this past week's drama in the desert.

With apologies to Mark Lindsay of Paul Revere and the Raiders -- the title was adapted from the song, "Arizona," and includes the lyric, "Take off your rainbow shades."