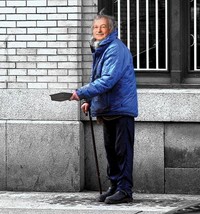 A couple months ago he had a fantastic idea. One reason cops are more and more often beating the crap out of people, he contemplated, is because they can't do their jobs. And they can't do their jobs because of all the pesky people hovering nearby that videotape their actions on smartphones and dashcams. So he introduced Senate Bill 1054, which makes it a criminal offense to get within 20 feet of a cop committing a crime - and recording it on media. In fact, you can't even have a recording device, on or off, within 20 feet. (21 feet away, logically, is allowed.)

Problem solved! Cops need 20 feet of space. No more of these nonsensical brutality cases clogging the courts. Why didn't we think of that? And this isn't the Senator's first brilliant solution. This month, when Phoenix started to look into issuing some form of ID to undocumented immigrants - maybe just to keep track of them - our Senator introduced Senate Bill 1017, which makes it illegal to issue any form of ID that differs from what's issued by the Department of Motor Vehicles. That'll learn 'em hobo immigrants. Now we don't have to know where you are or what you're doing and can keep blaming everything on you. Gotcha!

Now here's another problem in Arizona. Since passing a medical marijuana law in 2010, pot smoking among teenagers has dropped significantly. Holy heck! How did that happen? Everybody wants teens to smoke pot. Let's ask Kavanagh what to do about this travesty. Well, says Kavanaugh, make pot illegal again! Criminalize the sick, put the stoned teens in jail and keep those cartels rolling in dough. Bonus: illegal pot, he says, is lower grade and keeps people less high. And "illegal pot" has a nice ring to it.

Then, of course, when Arizona decided to go as green as a red state can and ban plastic grocery bags, our Senator had a hissy fit and joined in on Senate Bill 1241, which bans cities and counties from banning the bags. Reasoned Kavanagh, unlike most states, Arizona has plenty of landfill space. Let's put it to good, patriotic use!

And, of course, he's scared shitless of transgendered people using his public bathroom or gym facility because they're actually pedophiles, or "transgender ruses." So, he fixed the problem. If a public facility wants to dictate which stall to use rather than obey a law that says people get to choose, they no longer face criminal charges under that law. The transgender people might get arrested, but not the facilities that operate them. So, see, now everybody has his or her rights - you can't discriminate against transgendered, but there's no crime in doing it. Senator Kavanagh loves everybody. Except the poor. He's trying to figure out why half of them don't pay any taxes but receive the most benefits. His first initiative has made it easier for them to panhandle. Stay tuned.

But Senator Kavanagh is the ultimate Dear Abby, Deepak Chopra and Tickle Me Elmo of our time. Rolled into one.