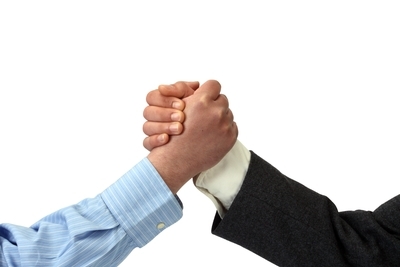 One of the good things about being the night desk clerk at a seedy hotel in Cambridge, Mass., is that you get to be invisible to most people. If you're looking for a place to disappear and still make a living, this is about as good a place as any. To begin with, it's the night shift, so mostly everyone else is asleep. And secondly, the few people who are awake and walk into your lobby are either fumbling for their room key or talking on their phone so they don't really notice you exist. You are, for all intents and purposes, part of the background. Like a potted plant or the maximum occupancy sign.

Invisible to most people, however, does not mean invisible to all people and, on this particular night, the exception was the rule.

Staring at me from across the lobby was a very large man -- 6'5" tall at least, with broad shoulders, and an ill-fitting suit.

"HEY!" he shouted, walking in my direction. "I don't like hippies", an obvious reference to the length of my hair which I'd been happily growing for the past two years.

I paid no attention to him, attempting to make sense of the night's bar receipts, but the man kept coming, moving at a gait that suggested he probably should have left the bar at least an hour ago.

"Do you know who I am?" he bellowed, now separated from me only by the front desk itself.

But no matter how much I ignored him, he would not go away.

Standing to his full height, steely-eyed, unflinching, he spoke.

"I challenge you to an arm wrestle."

"You WHAT?" I replied, not actually believing what I was hearing.

"You heard me, my little hippie, friend. I said I challenge you to an arm wrestle."

"OK, you're on," I replied, not being one to slink away from a challenge and realizing, at the same time, that I had absolutely nothing to lose, him standing almost a foot taller and weighing at least 100 pounds more than me.

What my opponent didn't know about me was two things: first, I was a very good arm wrestler and always had been. And second, I was an active student of the martial arts -- Aikido, to be more exact -- and had recently learned a very powerful technique called "The Unbendable Arm", a visualization technique where you imagined an endless stream of energy flowing through your arm and out your fingers for 10,000 miles. Done correctly, no one could bend your arm. No one.

When Mr. CIA put his massive arm on the marble-topped desk between us, it dawned on me that I was at a massive disadvantage because of the extraordinary leverage he would have and I was not about to be put at a disadvantage. So I looked straight into his beady little CIA eyes and told him that the only way this arm wrestling contest was going to happen was if I put a few books under my elbow to even the odds.

Impatient to begin, he agreed. With my free, right hand, I reached over to my night's reading and chose three books: The Complete Poems of Rilke, the I Ching, and Trout Fishing in America.

Now we were ready. Now was the moment of truth, the CIA agent and me, alone in the lobby of the Homestead Motor Inn, aligning our arms on the marble-topped desk.

It was clear to me, as we readied ourselves to begin, that my opponent was planning on taking me out in one power move. He was going for the kill and I had to be ready for that, which is what my preparation was all about as we continued adjusting books and arms -- me remembering the teachings of my Sensei and concentrating on an endless stream of energy flowing through my arm, out my extended fingers, for 10,000 miles.

As expected, he made his power move, putting everything he had into it, one gigantic burst of force. But I was ready. He could not budge me. Not an inch.

Shocked, he tried again, this time grunting, his face getting redder by the second. And still the same result. None. His arm and mine were still in their same original positions. No movement had been made. He made a third attempt and still, nothing -- the only visible proof of his effort, the veins in his neck bulging.

I could see the look of doubt in his eye. Confusion, too. I mean, here he was, almost a foot taller and a hundred pounds heavier, and he had nothing to show for his efforts. The more he tried, the more exhausted he got.

I was not trying to win. All I was doing was standing my ground, mano a mano, living the teaching of a Great Martial Arts Master here in the lobby of the Homestead Motor Inn.

After another minute of non-budging, it became very clear to my opponent that his strategy was not working.

That's when it hit me. NOW was the perfect time for me to strike. And so, I made my power move, putting everything I had left to take him down. Shocked I was going after him, he rose to the occasion, shifting into his own 5th gear of energy to parry my attack, veins still bulging in his neck, beads of sweat now forming on his forehead. A second effort, I reasoned, made no sense, as it would only weaken me. So I did nothing. The two of us just stood there, frozen into some kind of eternal handshake mudra on the front desk of a second rate motel.

"Shall we call it a draw?" I asked in the most neutral voice I could muster. He nodded once, stood to his full height and, in slow motion, backed away, one step at a time, to the center of the lobby, holding my gaze the entire time. Then, with a sly smile, he brought his two hands together in front of his heart, bowed deeply from the waist and returned to his full height. Following suit, I brought my two hands together and bowed once to him, as well. Then he turned to the elevator, walked the rest of the distance across the lobby, pushed the "up" button, entered, and was gone.

Mitch Ditkoff is the Co-Founder and President of Idea Champions, an innovation consulting and training company headquartered in Woodstock, NY. The above story is excerpted from his forthcoming book, STORYTELLING AT WORK: How Moments of Truth on the Job Reveal the Real Business of Life).