Because of Klein's premature death at the age of 34, his career ended nearly 50 years ago, and it has been thoroughly analyzed in numerous museum exhibitions and scholarly monographs. In contrast, the career of his close friend and fellow Nouveau Realiste Arman, who died in 2005 after outliving Klein by more than four decades, is much less familiar. During the past four months, Arman's work was surveyed in a retrospective at Paris' Centre Pompidou. The exhibition presented a fascinating portrait of an important and imaginative conceptual artist.

In 1947, at the age of 19, Armand Pierre Fernandez met Yves Klein, who was also 19, at a judo school in their home city of Nice. Through Klein, Fernandez discovered the art of Vincent van Gogh, and in tribute to Vincent, decided to use his first name as his artistic signature. (In 1957, a printer's error on a poster omitted the last letter of his name, and he adopted this abbreviated version thereafter.)

Arman studied art in Paris in the early 1950s, and his painting was heavily influenced by such leading artists of the time as Jackson Pollock and Nicolas de Staël. Yet like Klein, Arman reacted against the gestural techniques and visual motivations of the Abstract Expressionists and Tachistes, and sought other means of creating images, that would have a basis in ideas. Motivated by his fascination with the infinite in nature, Klein effectively adopted a strategy in which he would create paintings that resembled gestural abstractions, but in which the forms were produced by means other than the artist's personal gestures. The most famous of these were the Anthropometries, in which nude models covered themselves with blue paint, then pressed themselves against large canvases, creating images of bodies floating in space. In contrast, Arman committed himself to making concrete forms of art out of the real and tangible, using the manufactured products of modern society. Throughout his long career, he devised a series of means by which real objects would produce works of art that echoed the gestural abstractions of Abstract Expressionism and Tachisme. 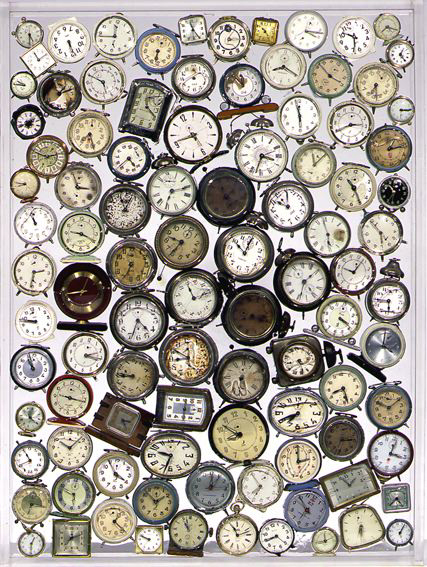 Arman's greatest breakthrough came in 1960, with his innovation of the Accumulation. Each Accumulation consisted of a large number of identical or similar objects -- shoes, dolls, clocks, typewriters, saws, or any other manufactured object he might find in bulk at a flea market -- arranged to cover the base of a wooden box, then sealed behind a plexiglas sheet. The Accumulations used repetition to achieve abstraction: just as repeating a word eventually makes it lose its meaning, so juxtaposing dozens of identical shoes or violins reduces them to abstract forms. Arman liked to say that he did not invent the Accumulation, but that it had found him. He contended that the concept was almost genetic, for it had been present in his subconscious since his childhood, when he inherited a family obsession with making collections of things. His initial artistic innovation lay in the demonstration that seriality -- simple repetition -- transforms the appearances and meanings of familiar objects. 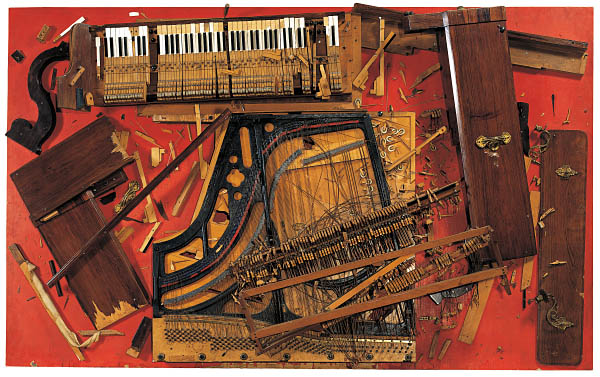 Arman did not stop with fixing whole objects in place, however. He soon began breaking them. For Chopin's Waterloo (1962), for example, he smashed a piano with an axe, in the presence of violinist Yehudi Menuhin, then fastened the debris to a large panel, and exhibited it in a show titled "Musical Rage." Other musical Colères (Tantrums) -- the collective name he gave to broken instruments -- were made by destroying a banjo, a guitar, a cuckoo clock, a mandolin, a violin, a cornet, a cello, and a radio.

Like many other conceptual innovators of the past century, Arman was always aware of creating new genres. So throughout his career, each new series of works not only looked quite different from those that preceded it, but also carried its own collective title, that referred to the means of its production. In addition to the Accumulations and the Colères, these included the Poubelles (Garbage cans), the Coupes (Sliced objects), the Combustions, the Inclusions, and the Shooting Colors. Hybrids were of course always possible, as for example the Homage to Cubism created a real equivalent to analytical Cubism, by displaying not imaginary fragments of guitars, but pieces of a number of real guitars -- a combination of an Accumulation and a Coupe. 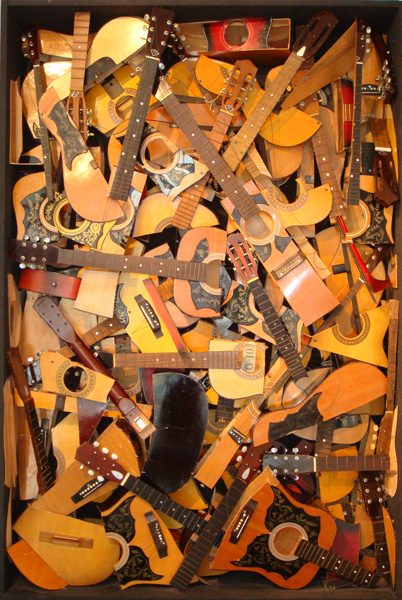 Arman's imagination was manifestly displayed at the Centre Pompidou exhibition, as a succession of rooms demonstrated how consistently he devised new means of making manufactured objects into works that shared a common ancestry in gestural abstraction. But perhaps the most surprising aspect the exhibition revealed about Arman's work was its unfailing beauty. Arman's strong aesthetic instinct persisted throughout his preservation, manipulation, and destruction of discarded junk and manufactured goods, almost in spite of himself. Like Yves Klein's, Arman's mature art began as a reaction against the personal expression of the art of the preceding generation. But also like Klein's, Arman's deliberate rejection of an aesthetic, subjective, personal art ironically produced new forms of conceptual art that are both personal and beautiful.