Turns out, "Armani diapers" are real -- they just aren't made by Giorgio Armani.

Russian artist Petro Wodkins recently confessed to creating an alternate Armani site that offered the so-called Armani diapers in a stunt to make a statement about consumerism.

Wodkins is known for his controversial artwork, which tends to circumvent legal bounds. In May, he replaced the iconic Manneken Pis statue in Brussels with a golden effigy of himself, much to the chagrin of local police.

To achieve his latest feat, Wodkins asked a friend to make some diapers and hosted a photo shoot with several babies, who modeled the $30 infant apparel. The tech-savvy artist then downloaded Armani's website and created a mirror site at ArmaniRussia.ru (Armani's real Russian site is Armani.com/ru) to feature the faux Armani line. 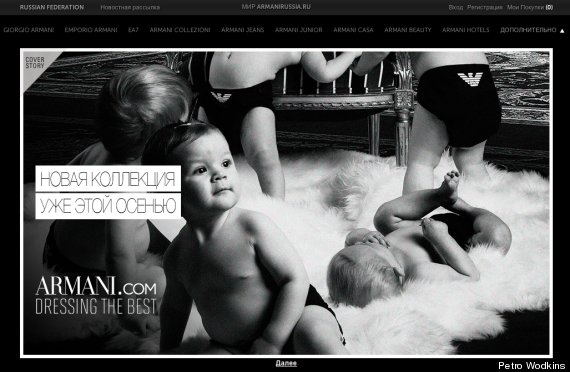 "I registered a new domain ... as a clue that is wasn't real. I could have hacked it but then it would have been less fun," Wodkins said. "It's more fun when there's a guy standing next to Armani, looking almost the same, waving and shouting 'I'm Armani' than to replace him."

Armani, however, did not see the fun in Wodkins' stunt. In a statement released last week the fashion house distanced itself from the site and labeled the items for sale as "counterfeit." The company also announced plans to seek legal action against the owner of the website in order to re-appropriate the domain.

Wodkins said he hasn't heard directly from Armani yet, but would "be glad to have a chat with them" -- not about copyright issues, but about consumerism.

"I think we see things close to Armani Diapers all the time," Wodkins told HuffPost. "People sacrifice and abandon what they deep down think is right, for a higher purpose, to belong and to find shelter and comfort. I'd say deep down everyone is feeling that a scarf for $1,000 is wrong, but the scarf serves a higher purpose -- to give you what you feel you need."

Though he thought of expanding the project to include commercials and print advertisements, Wodkins ultimately decided against those ideas and opted to focus on the website instead. (So that photo of an Armani diapers magazine ad floating around the Internet is probably a fake.)

"Mainly, I'm trying to make people see," Wodkins concluded. "Not necessarily what I want them to see but at least to open their eyes."

Giorgio Armani did not respond to HuffPost's request for comment at press time.