In series of anonymous posts, a number of uniformed service members have taken a stance against a potential engagement in Syria against President Bashar al-Assad, using political arguments that have sparked a debate about the behavior's legality.

This montage, shared more than 1,000 times, describes concerns about the role that al Qaeda and other extremists play in the rebel forces. 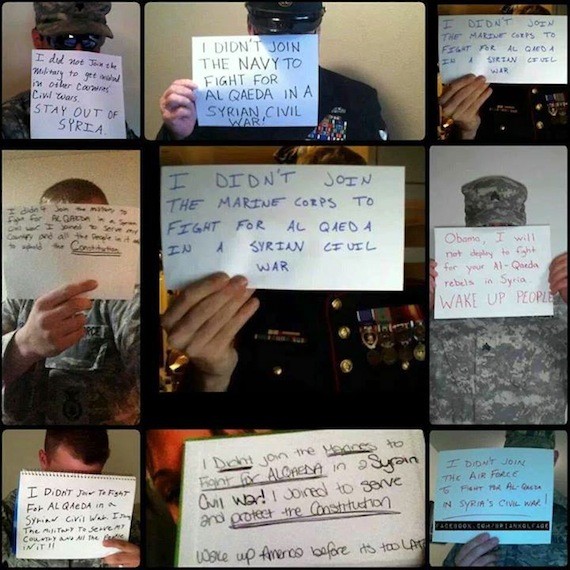 "I didn't sign up to kill the poor for the rich," reads another posting on the Armed Forces Tea Party page, which isn't officially affiliated with the military.

While those opposed to the intervention have claimed that displacing Assad could create a power vacuum to be filled by anti-American extremists, some have argued that active members of the military are violating the Uniform Code of Military Justice by publicly airing such grievances.

Politix points out that a "Failure to obey order or regulation" or "Contempt toward officials" are both punishable by court-martial.

One service member posted a photo suggesting he believes the dissenting displays are inappropriate: 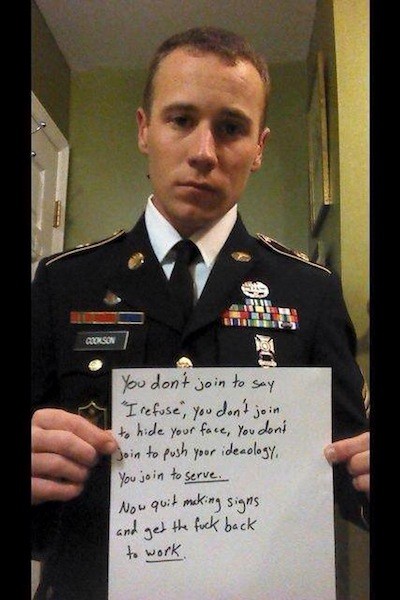 In a column at the Daily Banter, journalist Chez Pazienza accused the Armed Forces Tea Party of mounting a partisan political campaign as much about opposing President Barack Obama as it is about military engagement in Syria:

But the fact that you hate Barack Obama is meaningless; he’s your boss. When he tells you to jump, you say “how high?” Why? Because if you don’t the entire machine that is the all-volunteer United States military -- rightly and often referred to as the greatest fighting force that’s ever existed upon this earth -- breaks down, and that endangers all of us, regardless of whichever political belief we each happen to adhere to.

Pazienza goes on to write that he's never served in the military.

Further complicating matters, Politix reported Wednesday that the pro-Assad Syrian Electronic Army had posted a number of the service members' pictures during hack of the official U.S. Marine Corps website.

"Marines, please take a look at what your comrades think about Obama's alliance with Al Qaeda in Syria," the SEA's message on the Marine site read, before being taken down.

Politics, Facebook and the military have intersected controversially in the past. Marine Sgt. Gary Stein launched the Armed Forces Tea Party Patriots back in 2012, urging service members to exercise their free speech. Stein's group caught the attention of his superiors after he made a number of posts criticizing Obama, and he ultimately received an other-than-honorable discharge.

UPDATE: 9/5 -- Stein, founder of the Armed Forces Tea Party group, told HuffPost he isn't sure if any of the people seen in the picture above are members of his Facebook group. Regardless, Stein said he agreed with their opposition to the Syria intervention, but thought they would have been better off protesting out of uniform.

"We support their stance, just not their medium of saying it," he told HuffPost.