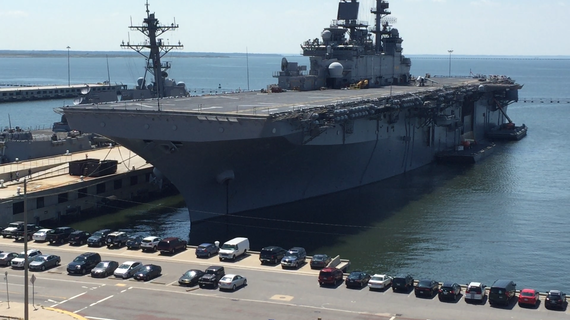 NORFOLK, VA- This August in an air conditioned auditorium, sailors escaped the heat on the largest naval base in the world to receive their certificate for completing a six-week solar training program. The Solar Ready Vets program brings military skillsets-- discipline, collaboration, technical skills, adaptability, and perseverance-- to meet America's energy needs, while also providing jobs to veterans in one of the fastest growing industries.

When you think of solar power advocates, images of Whole Foods-reusable-bags-Birkenstock-wearing liberals may come to mind. But one industry leading our nation in a transition to solar couldn't be farther from that description: the US military. Our men and women in uniform, preparing for deployment with large solar arrays in the background is already the reality for many military bases around the country, and is becoming more and more common. And here's why--solar panels allow our soldiers, airmen, marines, coast guard, and sailors more able to do their jobs: protect our beloved country.

For our military, solar panels aren't a symbol of political affiliation. Instead, they're about saving money and creating energy independence. The Department of Defense (DoD), the largest single consumer of energy in the U.S., has committed to producing three gigawatts of renewable energy by 2025, which will equate to roughly one quarter of any DoD facility coming from renewable sources. That's enough to power 2.25 million homes, or the equivalent of replacing six coal power plants.

In addition to providing our armed service members clean, cheap, and consistent power, solar is also providing another opportunity for our veterans: jobs. And lots of them--the solar industry is outpacing our economy in job creation tenfold. Within the past year, one out of every 78 new jobs in this country were in solar. The transition from protecting our country to providing it with resilient energy comes naturally to our veterans.

In 2014, three bases tested the Solar Ready Vets program, which is a four to six-week training to prepare our veterans to jump into the solar workforce. Hampton Roads Norfolk Naval Base was one of those initial three, and in an exercise of pure collaboration--the first of its kind--between the US Department of Energy Sunshot Initiative, the DoD, and Tidewater Community College, the program has been so successful that it is now implemented in over 10 bases across the country. Mihn Le (pictured below, right), the Director of the Solar Energy and Technologies Office for the US Department of Energy attributes the success of the program to the skills the veterans bring to the field. "Veterans have a lot of discipline and are trained very well. Approximately 10% of the solar workforce is composed of veterans, whereas only 1% of the population serves in the military. They are motivated to enter this field in a continuation of serving their country and rise more rapidly up the ranks than your average civilian." 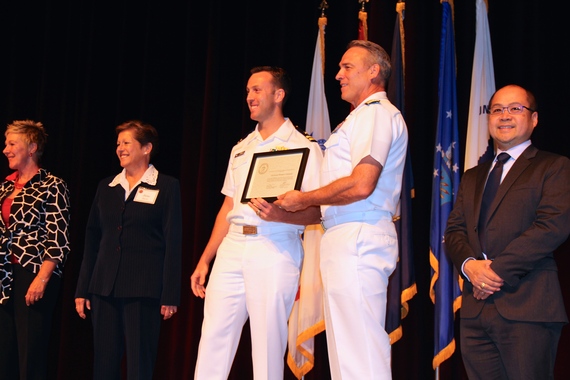 Lt. Morgan Halstead (pictured above in white on left) served as a sailor at the Norfolk Naval Base for 11 years, with experience as a Warfare Officer, Navy Riverines, and Intel Analyst. He represented his fellow sailors at the podium, saying "We have been making the world better by working for the Navy, and we will continue to make it better by working for renewables." Lt. Halstead said he came to the renewable energy field after serving abroad and seeing firsthand how the country's reliance on fossil fuels was a hindrance. After that experience, working in the solar industry was an "excellent opportunity and a no brainer."

So the next time you are in a conversation about renewable energy that paints it as a hippy technology, remember to bring up the fact that our military is leading the way, having armed themselves with solar power.