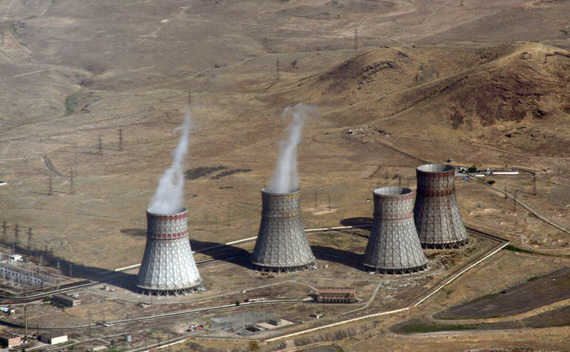 Armenia was supposed to have a new nuclear power plant this year that would replace one that National Geographic suggested a few years ago was the most dangerous in the world.

The new plant was to have twice the electrical-generating capacity of the current one, allowing Armenia not only to meet its own power needs but to export electricity to neighboring counties.

We're well in to 2016, and not only is the new plant not operational -- work on it hasn't even begun.

The problem is the $5-billion cost, a staggering amount for Armenia, one of the poorest countries in the former Soviet Union. The price tag equates to double the country's budget in 2009, the year the government committed to the second plant.

Countries in the South Caucasus and beyond worry about a failure of the current nuclear facility at Metsamor, which became operational in 1976.

It was supposed to have a life span of 30 years, until 2006. Recent upgrades mean the plant can run through 2026, the government has said.

Without money for a new facility, Armenia has no choice but to continue using the old one. It contends that $200 million it has spent to upgrade the facility has made it safe.

Some nuclear experts agree, but some don't.

Even Armenians who worry about the plant's safety don't want to return to the days between 1989 and 1995 when it was shut down after a 1988 earthquake in Gyumri, 48 miles from Metsamor. The quake devastated Armenia's second-largest city, killing 25,000 and leaving half a million homeless.

Although the plant came through the 1988 quake without a hitch, it is located in an active seismic zone -- and many Armenian nuclear officials feared a catastrophe if the next temblor involved a direct hit on Metsamor.

At the time they recommended closing it, Armenia was able to obtain oil and gas from Russia and Turkmenistan for its thermal power plants. The government decided to increase its purchase of those supplies to produce additional power from thermal plants to cover the loss of electricity from the nuclear plant.

The war between ethnic Armenians and Azerbaijan over the Nagorno-Karabakh enclave, which had long been Azerbaijani territory, dashed the thermal-plant plans, however.

That's because the oil and gas that Russia and Turkmenistan were sending to Armenia came through Azerbaijan, which refused to transport the fuel once the conflict started.

With the nuclear plant shut down and thermal plants unable to be ramped up, Armenians went through the Dark Ages for several years.

Power was available only one hour a day, bringing industry to a standstill and making life at home miserable. "You can imagine--it was as cold in the apartment as it was in the street" in winter, journalist Ara Tadevosyan recalled.

Although a truce in the war was negotiated in 1994, Armenia was still unable to get oil and gas from Russia and Turkmenistan. Azerbaijan demanded nothing less than the return of Nagorno-Karabakh.

Desperate for electricity, Armenia reopened the Metsamor plant -- the first time in history that a shuttered nuclear facility had been restarted.

Russia, which had designed and built the plant, helped Armenia refurbish it to prolong its life.

Even so, it was supposed to be decommissioned this year, at the same time that the new plant was to come on line.

The government committed to the new plant in 2009, and began casting about for financing.

At one point, Russia agreed to finance half the $5 billion cost. Talks also were held with the French, who have one of the world's biggest nuclear-power industries.

But the global financial meltdown that struck in 2008 made it difficult to obtain financing from countries besides Russia, many of whose economies were in the doldrums for years after the crisis.

Armenia had hoped to obtain financing after donor countries got back on their feet, but that hasn't happened, either.

Even Russia's help would be problematic at the moment, given plunges in the price of oil, which sustains Russia's economy, and the ruble since 2014.

So Armenia continues to make due with the Metsamor plant.

The International Atomic Energy Agency has inspected the facility, and declared it safe. But other experts are skeptical.

The big worry is that the plant has no containment building -- a steel or concrete shell that would prevent radiation from escaping during an accident.

If a rupture developed in the reactor's skin, radiation would have to be vented into the air to prevent a build-up of pressure that could trigger a meltdown or explosion.

The longer a nuclear plant operates, the thinner its reactor skin becomes, experts say -- and thinner skins are subject to rupture.

A rupture would mean "an open reactor building, a core with no water in it (to cool the reactor) and accident progression with no mitigation at all," said Antonia Wenisch of the Vienna-based Austrian Institute of Applied Ecology in Vienna.

The stakes in Armenia's nuclear gamble are high.

An accident at Metsamor would devastate the capital of Yerevan, only 20 miles away and home to a third of Armenia's population.

In addition, radiation would envelop Turkey, whose border is only 10 miles from the nuclear facility, and Armenian neighbors Georgia and Iran.

Despite the danger of an older nuclear plant situated in an earthquake-prone area, Armenians are unwilling to return to the days without electricity, when people died in ice-cold apartments, stripped forest land of trees they could burn, and drew down the water in Lake Sevan to dangerous levels to obtain power from the dam there.

Until the government is able to obtain the financing for a new nuclear plant, Armenia will continue to hope that Metsamor will not fail.

And the region and the world will join Armenians in holding their breath.