On Sunday, Armenia won the gold medal at the 40th Chess Olympiad in Istanbul. It is their third Olympic gold overall. They also finished first at the World Team Championship last year in Ningbo, China. 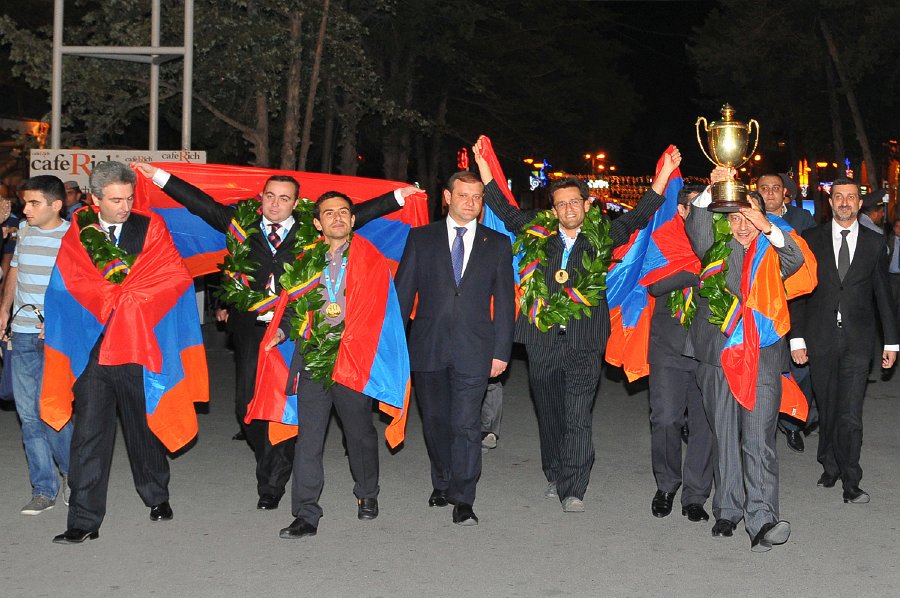 Upon arrival in Yerevan on Monday, the jubilant Armenian chess team was treated like national heroes by a cheering crowd and the president of Armenia Serzh Sargsyan who is also the head of the Armenian Chess Federation. Small countries do that. They cherish their victories. The Czech national ice-hockey team, led by Dominik Hasek and Jaromir Jagr, got a similar reception after they returned to Prague from the 1998 Winter Olympics in Nagano with a gold medal.

Ideally, to win medals at chess Olympiads, the team should not lose a match. But nobody went undefeated in the 11-round event in Istanbul. The outcome was decided not by how teams won their matches, but by the timing of their losses. Every time some teams jumped into the lead, they were knocked out like duck pins. Those who lost earlier could still recover. The drama continued into the last round and when it was over Armenia won nine matches, lost one and tied one. They had the most match points and the best tiebreak.

In the Women's Olympiad Russia and China scored 19 points, but the gold went to the Russians on a tiebreak. Ukraine won the bronze with 18 points.

Individually, the Czech GM David Navara scored the most points with 9.5/11. GM Shakhriyar Mamedyarov of Azerbaijan posted the best rating performance with 2880 points and a 8.5/10 score.

Let's ride the olympic roller coaster to see the ups and downs of the top five finishers. 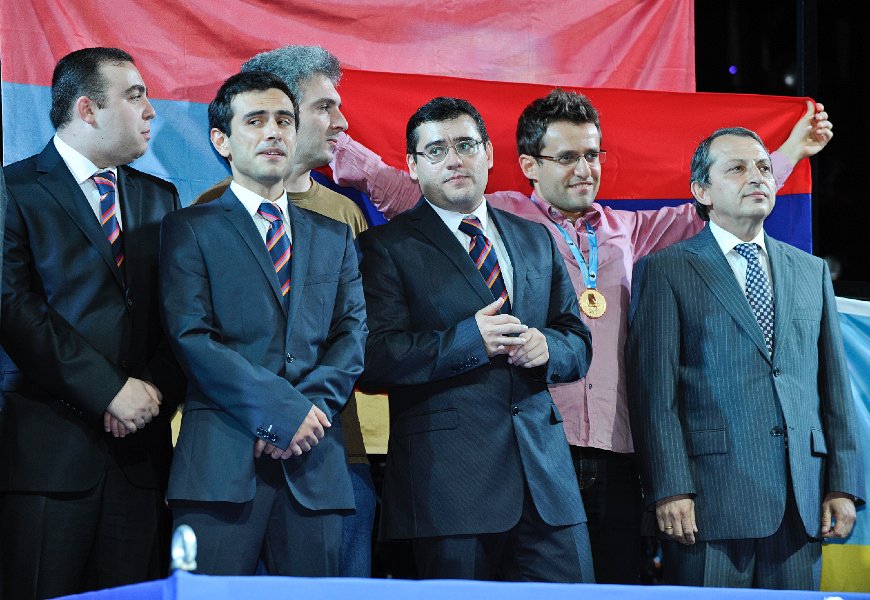 Armenia beefed up their line-up, acquiring Movsesian from Slovakia for $50,000. He finished with 50 percent on the second board, but delivered the only win against Hungary in the last round.

In the fifth round, Armenia clashed with Ukraine, the defending champions, and their top board Aronian brought home the victory in the Queen's Indian. 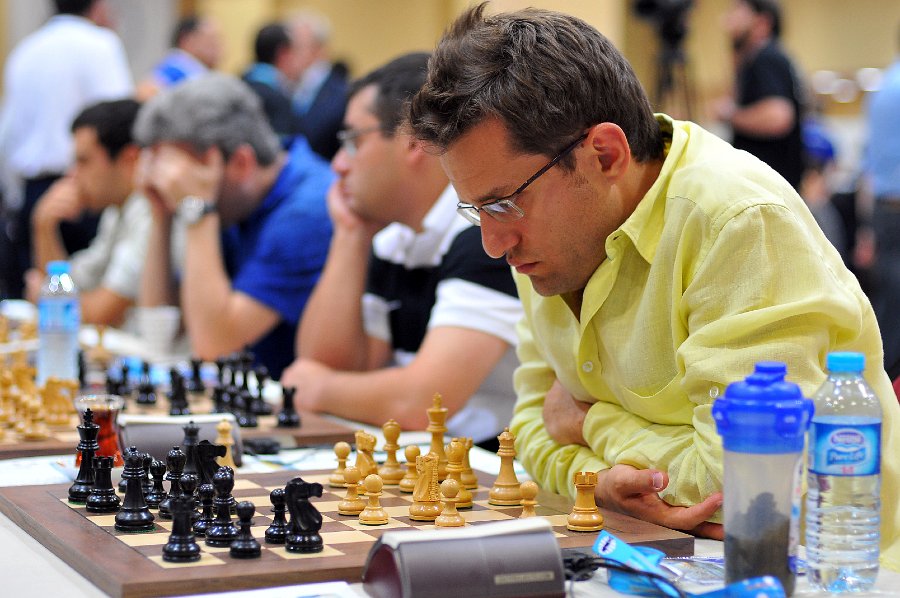 Nimzovich's sharp attacking idea in the Queen's Indian, but even the quiet line 4...Bb7 5.Bg2 Be7 6.0-0 0-0 can be spiced up with a pawn sacrifice 7.d5!? exd5 8.Nh4. The line became popular after the Candidates match Polugaevsky-Korchnoi, Buenos Aires 1980. Aronian played it against Ivanchuk in 2007and the game was drawn.

White doesn't need to place his knight on the rim anymore. After 11.Nh4 Ne4! black is fine.


Ivanchuk must have misjudged the complications.

Preparing an invasion along the diagonal b1-h7. The shattered, week pawns can't provide a good cover for the black king.

A clever move that threatens to push the dark bishop back with 24.b4. Ivanchuk prevents it, but it allows Aronian's rook to break into black's position.

Opening the a-file for the rook.

After this elegant jump, threatening 29.Qxh7 mate and attacking the rook on g8, black also has to cope with an unpleasant fork 29.Nc6.

Aronian is winning and he converts his advantage wonderfully.

A pretty combination, winning a piece.

In the sixth round Russia met Armenia. Although the match ended 2-2, the former world champion Vladimir Kramnik scored a fine win against Aronian. 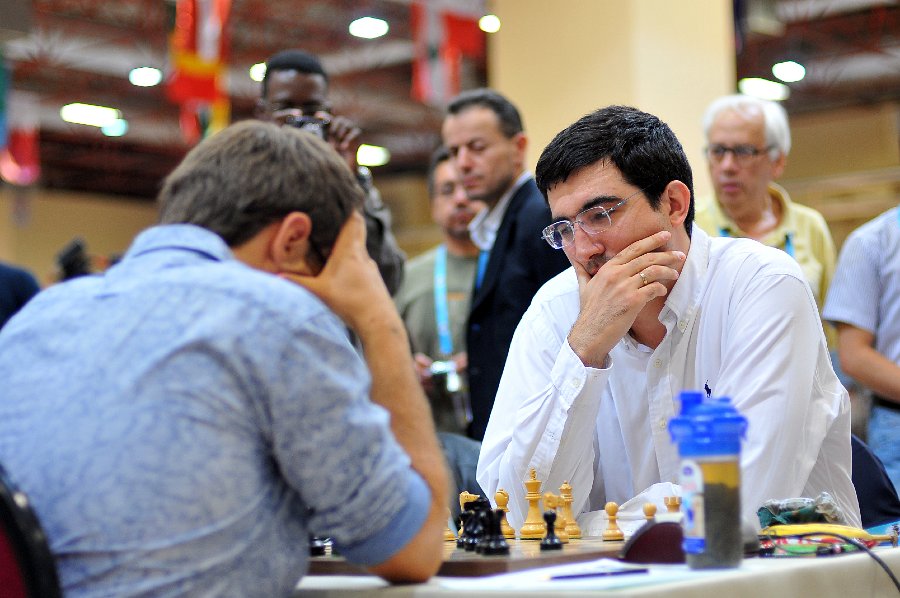 White was slightly better after 21 moves and black had to find a good defense. 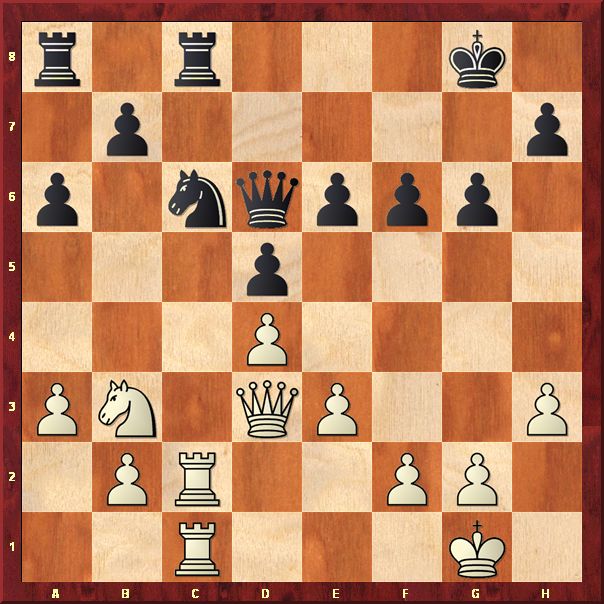 Doubling the rooks on the c-file is often a good idea in similar positions, but here it doesn't work. 21...b6 loosens the queenside pawns, but it was an option.

A beautiful long-term combination, breaking black's resistance. White will have two pawns for the knight, but black will be tied up. Eventually, white can advance the b-pawn and win the pinned black knight.

Black is caught in terrible crosspins and doesn't have a way out. The threat is 26.b5.

The double-attack wins the knight, but Kramnik is more interested in promoting the b-pawn.

After China defeated the Armenians in the seventh round, Russia took the lead, moving closer to their goal.

The previous matches between the Soviets and the Americans were always exciting and the US team didn't come out of it empty-handed. I was still playing on the team when we beat the Soviets in 1984 and in 1986. The younger Americans scored victory over Russia in 2006. With great performances on the top two boards, they beat the Russians again in Istanbul and with two rounds to go shared the lead with Russia, Armenia and China. 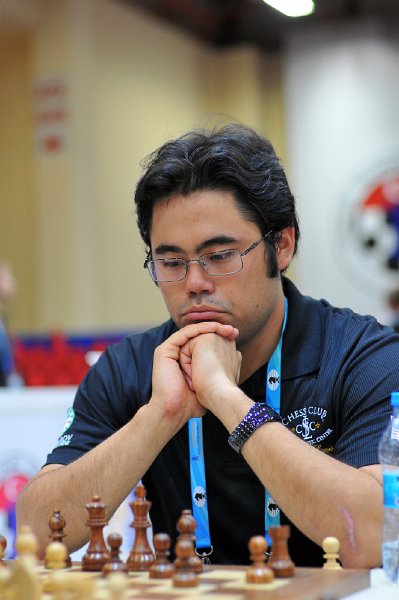 Hikaru Nakamura surpassed Bobby Fischer's rating record of 2785 in Istanbul. Hikaru showed great fighting spirit and his 6 points in 9 games was one of the top results on the first board. He took considerable risks in defeating Kramnik. 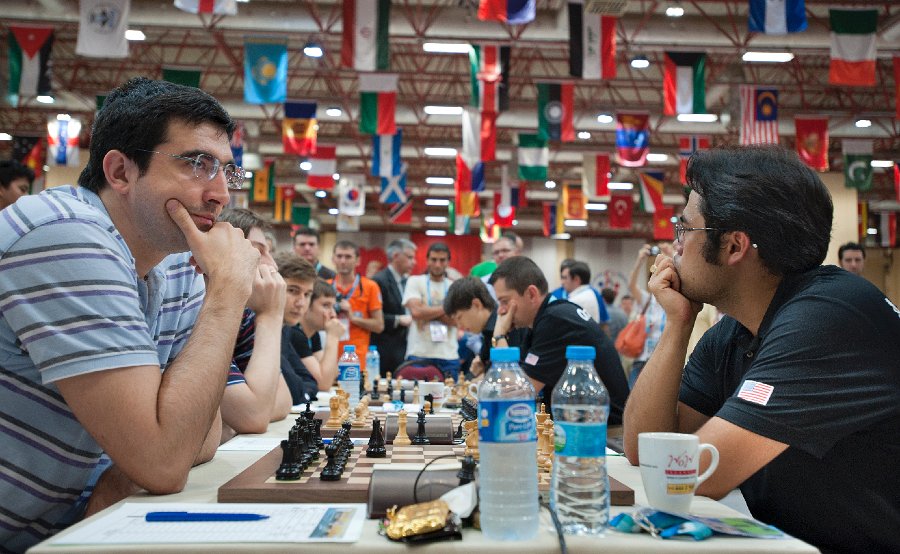 Nakamura played well against Kramnik in the past, defeating the former world champion a few times. Instead of taking a draw by repetition earlier in this game, Hikaru deliberately went into a worse position, but later outplayed the Russian. After 60 moves they reached this position: 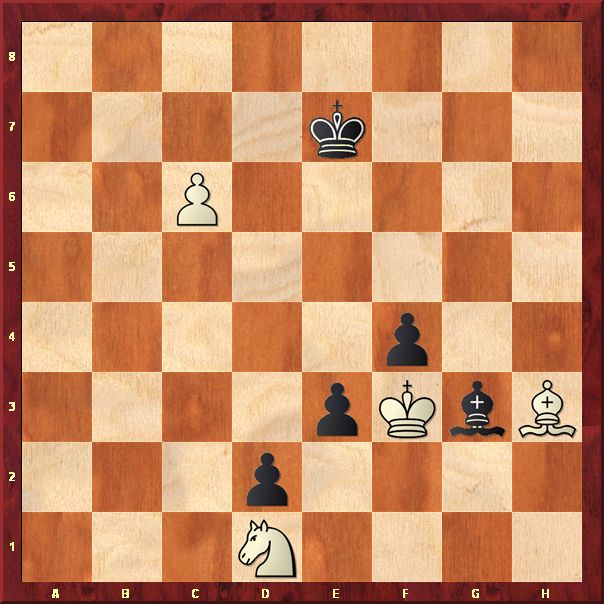 Nakamura has winning material on the board. He will soon capture the black pawns. Afterwards his bishop will take care of the light squares and one knight will control the dark squares. The other knight and the king will push the black king into a corner and mate him there. The game actuallly came to a quicker end.

This knight and the bishop contain the black king. The other knight does the final damage. 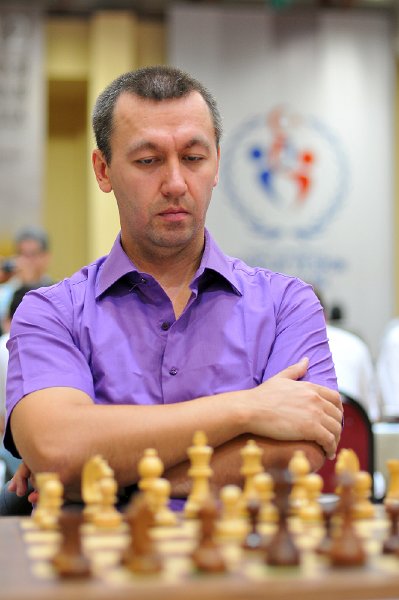 Gata Kamsky's stellar performance (8.5/11) was the best on the team. He outplayed Russia's Alexander Grischuk marvelously, but when he was about to collect the full point, things began to happen.

The endgame was an 18th century saga transferred to modern times with wonderful tricks and trades. Kamsky played a great technical game and should have won it. Instead, he allowed Grischuk to escape. With a draw in sight, the Russian slipped, proving that this endgame is difficult to defend even for the best players. The drama begins after 45 moves: 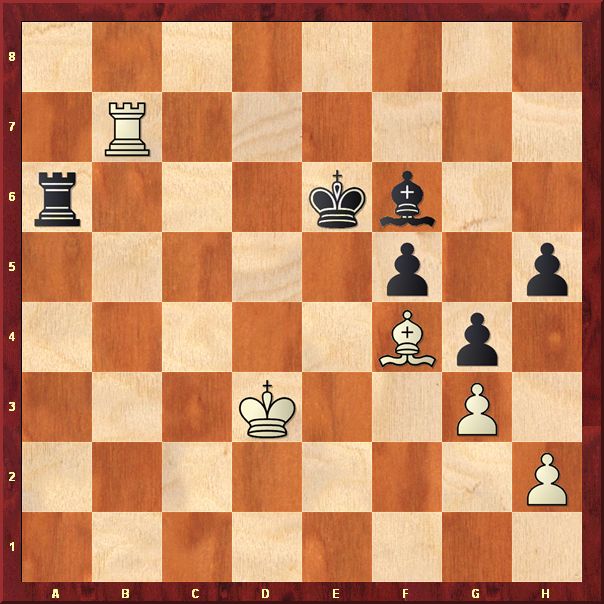 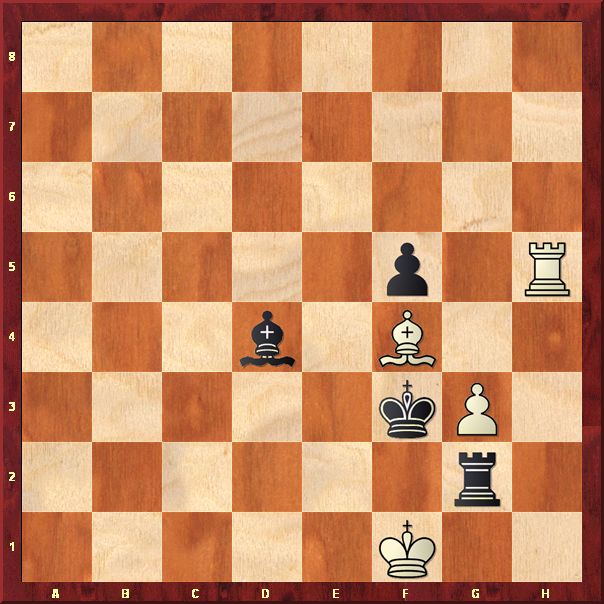 The rook and bishop vs. rook endgame with the king of the weaker side on the last rank was analyzed already in the 18th century. The winning methods were shown by the Italian master and theoretician Giambattista Lolli in 1763 and by the Frenchman André Danican Philidor in 1792. With a correct play, the weaker side may draw, but many games were lost during actual tournament play.

The best, according to the endgame tablebase, was to stay on the 5th rank, for example 59.Rh5.

The final coup, threatening 65...Rc1 mate. The saving move 65.Rd6 is denied by the bishop.

In the next round the U.S. team faltered and lost to China, but they fought back and beat Poland in the last round.

"Objectively, sharing the place with China was a better result than the bronze medal results in Turin and Dresden." says John Donaldson, the captain of the U.S. team. "We started well and were always within sight of the leaders. With a bit more luck we could have medaled."

The Chinese lost to Russia, but defeated the Armenians. With the victory over the Americans China leaped into a shared lead. They had the best tiebreak and a victory in the last round would have earned them the gold medals. But Ukraine smashed them 3-1 and took them out of medal contention.

The defending champion lost matches against Russia and Armenia. Getting the bronz was considered a miracle, but the Ukrainians managed to do it. Ivanchuk downed Wang Hao in the last round with a nifty combination. 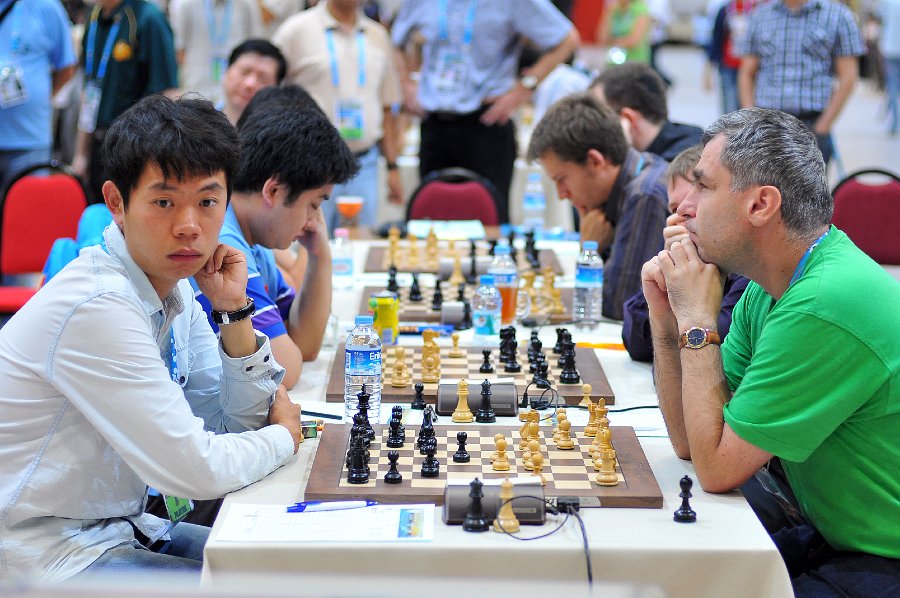 The point of this novelty is clear and simple: anytime white captures on d5, black would take back with his c-pawn. It opens the c-file and allows black to pressure the backward pawn on c3. The immediate 8...Ba6 had some success after 9.cxd5 Bxd3 10.Qxd3 Qxd5.

White fortifies the Pillsbury knight on e5. This attacking set-up was used by the talented American Harry Nelson Pillsbury (1872-1906). White only needs to lift his heavy pieces into attack.

Ivanchuk will now open the f-file. 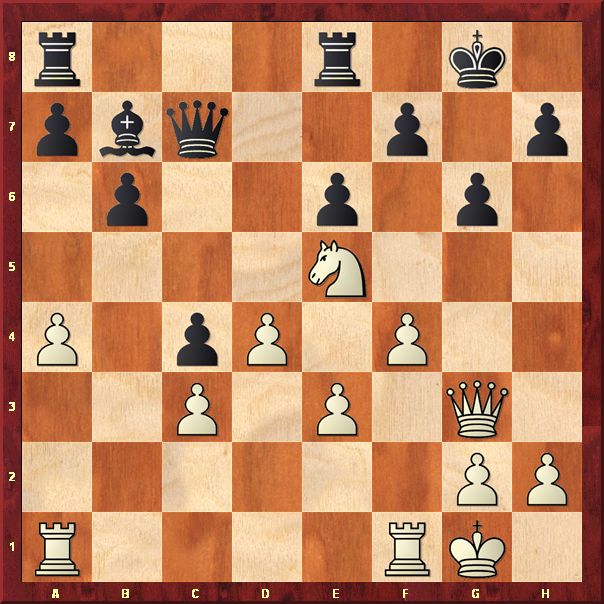 Allowing a pretty finale. But after 21...exf5 22.Rxf5 Bd5 23.Raf1 Be6 24.Rf6 white has a complete command of the dark squares. Black has no counterplay and white's attack grows with each new move.

The combination, sacrificing the knight and rook, wins easily. Ivanchuk had only to calculate properly.

Sacrificing the rook, Ivanchuk concludes the game with a king's hunt.

A powerful deflection, preventing the black king from hiding on the eighth rank.

For the record, 157 teams participated in Istanbul. The Women's Olympiad had 127 teams.