ISTANBUL -- On April 24, 1915, Ottoman Turkish authorities hauled off Daniel Varoujan, a leading Armenian poet of the time, along with over 200 other intellectuals in the capital Constantinople. To the crumbling Ottoman Empire, the poets, painters, writers, booksellers and politicians at the beating heart of the Armenian community posed too much of a threat.

Soon, much of the empire’s Christian Armenian population would be targeted and nearly wiped out, accused of conspiring against the empire with the Russians. Many Armenians say the genocide was collective punishment for the actions of a few.

In August, after a wave of deportations began that would force hundreds of thousands of Armenians on brutal death marches toward the Syrian desert, Varoujan was tortured to death, according to eyewitnesses at the time. Varoujan was just one of many men, women and children who lost their lives.

This week, Armenians from around the world are gathering in Istanbul to commemorate the deaths of nearly 1.5 million Armenians who died in what would later be known by many -- but not by Turkey, the United States and some other countries -- as the Armenian Genocide. A century on, the killings are hardly a thing of the past, with sensitive geopolitics still fueling the controversy.

Regardless of how it's labeled, here are some figures that explain the size and scope of this tragedy: 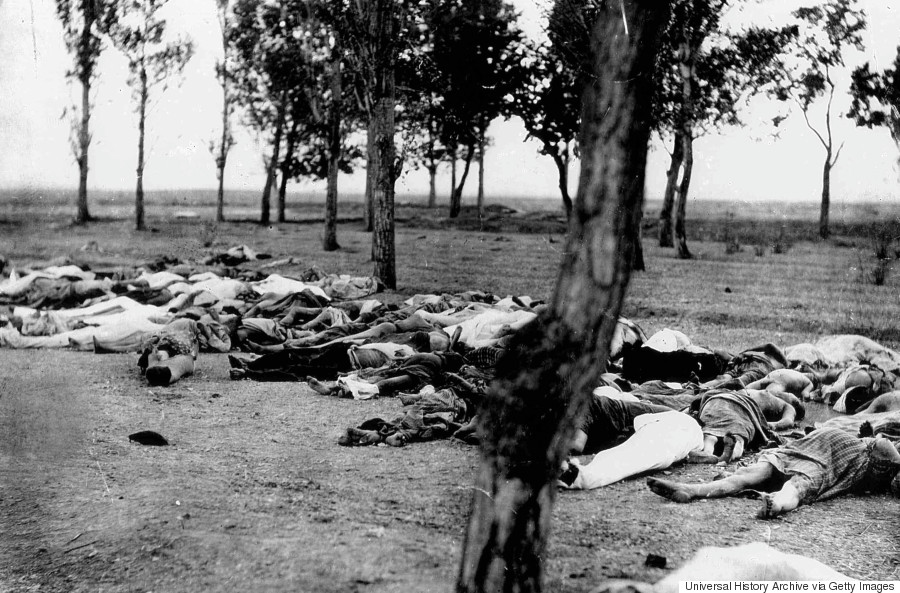 The number of Armenians believed to have been killed between 1915 and 1917.

“Rape and beating were commonplace,” wrote acclaimed historian David Fromkin in his Pulitzer Prize-winning book on the Ottoman Empire’s downfall, A Peace to End All Peace. “Those who were not killed at once were driven through mountains and deserts without food, drink or shelter. Hundreds of thousands of Armenians eventually succumbed or were killed."

An Armenian man in Istanbul, who as a schoolboy discovered his family was Armenian, told The WorldPost one story passed down to him by his parents: His grandfather, too exhausted to walk any farther in the death march toward the Syrian desert, refused to go on. He would rather drown than walk another mile to his death, he told the Turkish Ottoman guards. And so, the man says, they held his grandfather under the water until he was dead.

The number of intellectuals reportedly rounded up by Ottoman Turks on April 24, 1915, in Constantinople (now Istanbul), kicking off what would become a massive wave of arrests, deportations and killings. Many of these Armenians were later deported and in many cases killed. Armenians commemorate the anniversary of the Armenian Genocide every year on April 24.

“They took the intellectuals, the cream of the crop,” one Armenian book publisher who said his father, a baker, lived in Constantinople when the arrests took place, recently told The WorldPost. “They took the head and left the body.” 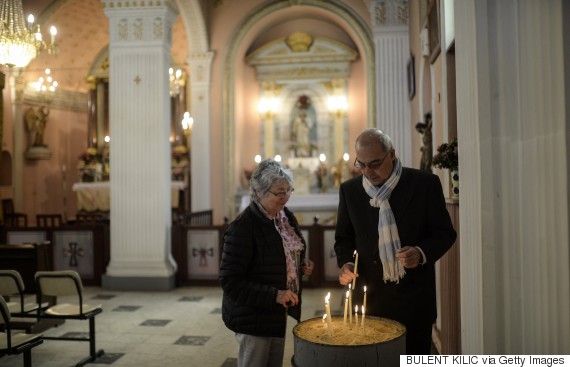 The number of dead bodies reportedly found in 1916 in a mass grave in Maskanah, a northern town in what is now modern day Syria, according to Jesse B. Jackson, U.S. consul in Aleppo. "As far as the eye can reach mounds are seen containing 200 to 300 corpses buried in the ground," he said in a cable to Washington.

The number of Armenians who died during this period due to war and disease, according to Turkey, which vehemently denies the 1.5 million figure.

“According to independent researchers, 300,000 Armenians lost their lives because of the war and disease,” reads one Turkish state-provided textbook for high school students. “But during that time, Armenians killed 600,000 Turks and forced 500,000 Turks to leave their land.”

The number of Armenians living in the Ottoman empire before 1914, according to the University of Minnesota’s Center for Holocaust and Genocide Studies.

The number of Armenians still left in the Ottoman Empire in 1922. 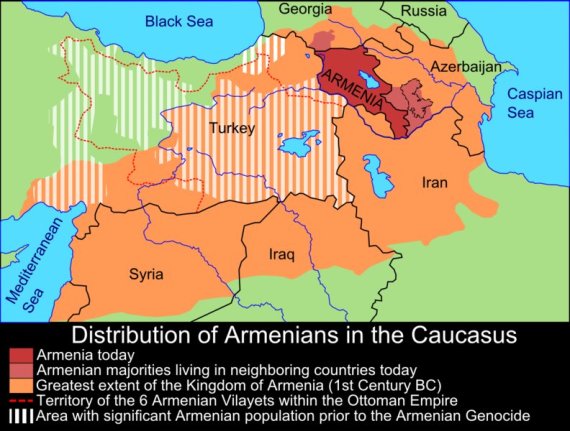 The number of nations that officially recognize the Armenian Genocide. The list does not include the United States, Israel and many others who on the centenary are grappling with labeling the killings a genocide. Germany is expected to finally do so on the anniversary.

The Armenian Genocide still remains one of the most bitterly contested events in history, especially for Turkey, fiercely defensive of its Ottoman past.

If President Obama decided to label the 1915 killings as genocide, already strained relations would likely only worsen with Turkey, where the United States has an important air base in the south, close to Syria. Turkey and the U.S. government have butted heads over the Syrian crisis, with a U.S.-led coalition targeting solely Islamic State extremists, while Turkey insists military efforts must also focus on bringing down Syria's Bashar Assad. The United States has said Turkey, hosting over 1.7 million desperate Syrian refugees, has failed to do enough to counter extremists who often cross its border into Syria with ease.

The White House doesn’t want to use the fateful “g” word because it would anger the wrong people.

That’s essentially what officials said Tuesday when faced with increasing pressure to label the mass killings a genocide.

Citing “regional priorities” in its decision not to say the killings amounted to genocide, the U.S. government insisted it would urge “a full, frank, and just acknowledgment of the facts,” according to a White House statement.

The decision angered many Armenians in the United States and abroad who say they had hoped President Barack Obama would use the centennial as an opportunity to put things right, considering his track record of acknowledging the genocide prior to assuming the presidency. 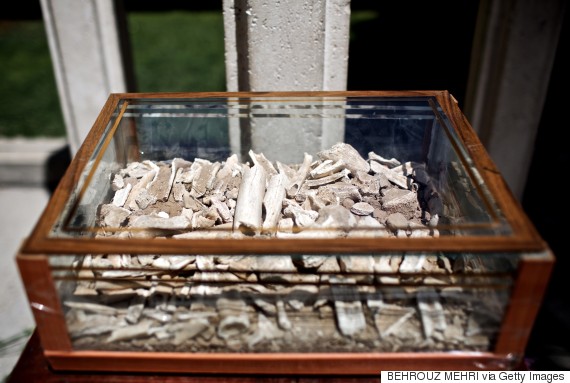 There is real concern in Turkey that legal ramifications of calling the 1915 massacres a "genocide" could lead to costly reparations.

In a recent column in the Daily Sabah, a Turkish newspaper known for its staunchly pro-government rhetoric, one columnist wrote that the genocide claimed by Armenians is just a ruse by the Armenian diaspora and descendants in Turkey to tear apart the country and take over Turkish territory.

While Turkey in recent years has taken more conciliatory steps towards addressing the killings of Armenians, with Turkish President Recep Tayyip Erdogan making what was considered to be a groundbreaking speech last year in which he offered condolences to the descendants of those killed, tempers have recently flared.

With the lead-up to the 100-year anniversary, Turkey has furiously defended itself from genocide claims, lashing out at the Pope and the European Parliament for their views on what is widely seen as a systematic slaughter.

"Concealing or denying evil is like allowing a wound to keep bleeding without bandaging it," Pope Francis said earlier this month after calling the killings the first genocide of the 20th century. Ankara then recalled its ambassador from the Vatican.

Turkey's Erdogan dismissed the genocide debate, just as the European Parliament voted on April 15 to call the events of 1915 a genocide. On Wednesday, Turkey said it was pulling its ambassador to Austria over the debate.

While Turkey acknowledges that some Armenians died -- calling them casualties of war, disease and chaos of the time -- the state says that since the deaths were not methodically planned to wipe out Armenians, it does not add up to genocide.

"It is out of the question for there to be a stain, a shadow called 'genocide,' on Turkey," Erdogan said last week."

This story has been updated to clarify that while Germany does not currently call the Armenian massacres a genocide, it is expected to do so soon.

More from the WorldPost on the Armenian genocide:

- 'The Genocide is not forgotten. It's impossible to forget' - On the blog: Denial of the Armenian Genocide is brutalizing the world