JERUSALEM -- As dusk settled over the Old City one evening recently, Noemie Nalbandian stepped into the dimly lit cathedral of St. James in Jerusalem's Armenian Quarter. Hundreds of oil lamps hung from the vaulted dome like an army of parachutes in the evening sky. In one corner, Nalbandian lit a candle, performed the sign of the cross, closed her eyes and offered a prayer.

St. James is the center of Armenian life in Jerusalem. Each year on April 24, Nalbandian and hundreds of other Armenians living in Israel gather at the cathedral to commemorate the Armenian genocide. After prayer services, they march to the Turkish consulate singing songs and holding posters demanding that the Turkish government recognize the mass killing of 1.5 million Armenians living under the Ottoman Empire between 1915 and 1923. No Israeli officials were expected at the commemoration; indeed, the Israeli government is itself an unmentioned target of the protests since it, too, refuses to recognize the Armenian genocide.

Nalbandian, an Israeli citizen who works as a nurse and heads the Jerusalem branch of the Armenian Relief Society, the oldest international Armenian aid organization, belongs to the third generation of survivors of the Armenian genocide. During the killings, her maternal grandparents were forced into the desert of Deir ez-Zor, in what is today northern Syria. Unlike many other Armenians who perished in the desert, Nalbandian's grandparents survived and traveled across what is now Syria and Lebanon, and settled near the Israeli port city of Haifa along with about 100 other families.

Nalbandian and her two brothers were raised in a very patriotic Armenian household in Jerusalem. "From our childhood, we were raised to love our motherland Armenia, our alphabet, our songs," she said. Nalbandian, who also speaks Turkish, Arabic, Hebrew, French, English and some Spanish, was not allowed to speak anything but Armenian at home.

"We commemorate the 24th of April, 1915, because on that day the Turks rounded up more than 300 [members of the Armenian] elite -- doctors, writers and intellectuals -- and shot them in the middle of Istanbul," she said. This was considered the start of the wider genocide. "It took the Armenian years to find themselves, build themselves and asking for recognition for what happened to them," she said.

Turkey denies that a genocide of Armenians occurred, and argues that lives were lost on both sides as a consequence of war.

Experts reject that argument. In a 2005 letter to the Turkish prime minister, Recep Tayyip Erdogan, the International Association of Genocide Scholars affirmed that an act of genocide occurred. They wrote, "We want to underscore that it is not just Armenians who are affirming the Armenian Genocide but it is the overwhelming opinion of scholars who study genocide: hundreds of independent scholars, who have no affiliations with governments, and whose work spans many countries and nationalities and the course of decades."

The Elie Wiesel Foundation for Humanity -- an international organization that promotes youth dialogue and understanding -- also produced a letter signed by 53 Nobel laureates in 2007 that reaffirmed that the 1915 killings of Armenians constituted genocide.

Currently, however, only 21 countries recognize the genocide. Under Turkish diplomatic pressure, Israel and the U.S. have avoided doing so. "It's all politics," said Noemie. "How can a people who have lost 6 million people of its own in the Holocaust not recognize the grief and the pain of another people?" she said. "More than 1.5 million people died. They weren't animals. They were people. They are due that respect. Why not recognize? The Germans recognized the Holocaust."

Nalbandian's anger is also shaped by her experience at the 55th anniversary of Israeli independence in 2003. Each year, the government selects 12 torchbearers to light torches in honor of their contributions to the country. Nalbandian was among those selected in 2003. She was honored for her service as a senior nurse at Jerusalem's Hadassah Hospital during the Second Intifada.

The Israeli government did not expect that Nalbandian would make mention of her own story of coming from a family of survivors of the Armenian genocide at the ceremony, which takes place at Mount Herzl in Jerusalem each year.

Three days before the ceremony, Nalbandian recited her prepared speech at the rehearsal. She described herself as "a third-generation survivor of the Armenian genocide, which took place in 1915." Later that afternoon, at a luncheon taking place at the Knesset, the Israeli Parliament, two government officials approached her. They explained that the Turkish embassy was very angry and alarmed that an Israeli citizen would be making comments recognizing the genocide at an official ceremony.

Nalbandian was forced to modify her speech. She experienced pressure from some members within her community as well, who insisted she not modify her words. At the end, Nalbandian decided to play a balancing act. "I was chosen as a nurse. I was not representing Armenians. I was representing 5,000 workers of the Hadassah." On the day of the celebrations, she adjusted some words and shared her story as a third-generation of "a nation that saw sorrow" without explicitly making mention of the genocide.

Nalbandian still has the two pamphlets from the celebrations -- the one with her originally planned speech and the second version. The Israeli government did away with the 4,000 pamphlets that were produced with the original version to avoid a diplomatic crisis, she explained.

The decision continues to anger her. "A nation that has suffered must be so human [enough] to feel with other nations that suffered too," she said. "What if the rest of the world behaved this way in the face of Holocaust survivors? Shame on Israel for not giving me the right to share my story only for diplomatic and political gain. This is humanity?"

From a Jewish religious perspective, says Rabbi Rachel Kahn-Troster, the executive director of Rabbis for Human Rights-North America, denial is unacceptable. "The experience of compassion is so important in the Bible ... given the Jewish experience in Egypt. Our experience -- the Jewish historical experience -- teaches us to have compassion for others with similar experiences."

And yet for many Jews, she explained, "Talking about the Armenian genocide as one of many genocides is difficult ... Part of how we cope is viewing the Holocaust as a unique event."

Nonetheless, Kahn-Troster said, Jews must acknowledge the Armenian genocide and understand that the Holocaust was not the first genocide in human history. "The whole message of 'never again' is very important to the Jewish community. And there is an obligation to understand the first genocide of the 20th century. The philosophy has no teeth otherwise," she said. "We shouldn't be afraid to say it happened just because geopolitical reasons prevent us from doing so."

In Israel, there have been some efforts to induce a change in official policy. For more than six years now, members of the left-wing Meretz Party have been working for a Knesset decision on the issue. "Meretz has always supported the Israeli recognition of the Armenian genocide. There were never any controversies on the subject among us on this issue," said Yossi Sarid, a former leader of the party. However, the party's efforts have yet to bear fruit. "As far as I know, even now, there is no majority for recognition, in spite [of] the deterioration of bilateral relations between Israel and Turkey," he said.

That diplomatic crisis dates to Israel's attack on a humanitarian aid flotilla headed for Gaza in May 2010. The raid resulted in the death of eight Turkish nationals and one American of Turkish origin. Following the attack, Turkey recalled its ambassador to Israel. Bilateral relations hit rock-bottom in August of last year, when Ankara expelled Israel's ambassador after the United Nations published a report on the 2010 flotilla incident, and Israel made it clear that it would not issue an apology.

To date, full relations have not been restored. Since then, Israeli tourism to Turkey, which had been a prime destination for Israelis, has plunged by 90 percent according to official Turkish data.

For the first time, however, Israel's Knesset held an open discussion on the contentious issue of genocide recognition in December last year, which caused a political stir. National Security Adviser Yaakov Amidror stated that it was time to try and "reduce tensions with Turkey, not pour more oil on the fire."

These events gave a glimmer of hope among some Armenians that Israelis may finally ignore Turkish pressure and recognize the genocide. But others, such as Nalbandian, remain pessimistic about changes anytime soon.

A top diplomat familiar with the issue, who wished to remain anonymous, also expressed uncertainty over whether Israel will recognize the Armenian genocide anytime in the near future. "Turkey is a regional superpower that is very important for Israel and has been serving as a stabilizer in the region for many years. It should maintain or retake this role sooner rather than later," he said.

"I think [the Turkish-Israeli diplomatic crisis] is not as bad as it is being portrayed in the media." "There are efforts on both sides to maintain the stability." The strength of the underlying relationship is shown by continued growth in trade between Turkey and Israel since the flotilla raid. Turkey remains one of Israel's prime trading partners.

When asked about the perceived double standard in Israel's stance on recognition of genocide, he described the Holocaust as a unique event. "I think that the Holocaust is unmatched in human history in its scale, its planning and its preparation," he said. Israel, he acknowledged, must be more sensitive than other countries about genocides taking place in the world. "We need to lend a hand and not be silent and take the leading role when we recognize that there is an issue. I think it's our commitment as Israel and our commitment as Jews," he said. He pointed out that Israel has taken in refugees from Cambodia, Rwanda and Sudan. On the Armenian issue, however, his words were brief: "It's something that is very delicate and very sensitive."

On April 24 this year, Nalbandian will once again be marching from St. James Cathedral to the Turkish consulate. She said she will continue to do so each year. For now, she patiently awaits the day Turkey and other countries like Israel recognize the genocide. "We will not let go," Nalbandian said with conviction. "The day will come." 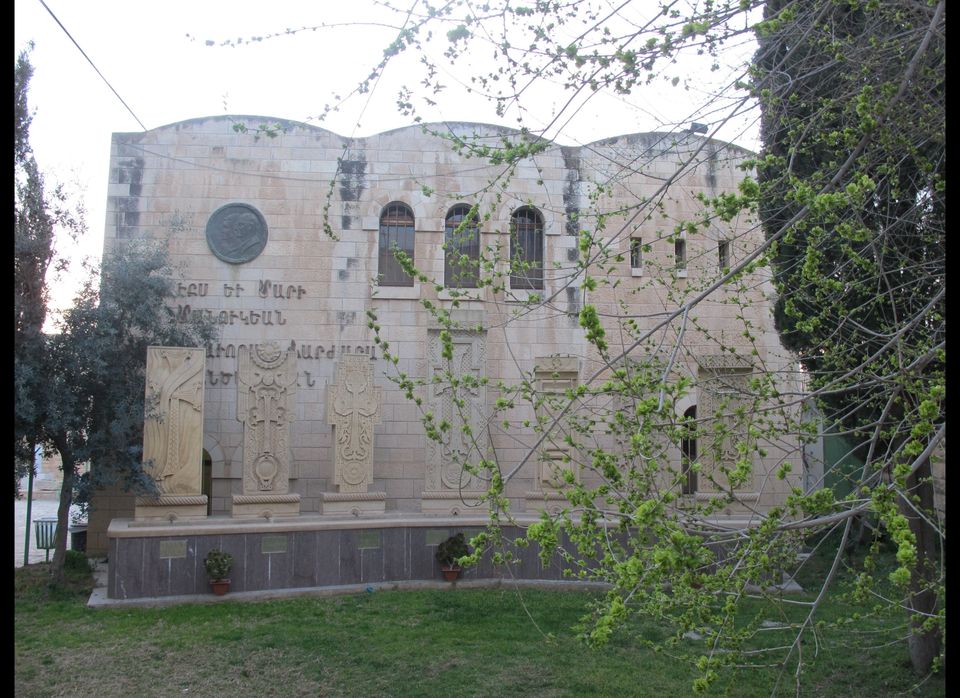