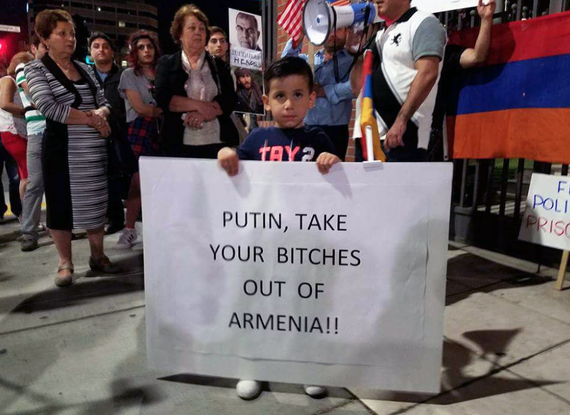 Image: Ethnic Armenians have been protesting in and out of the country in recent years. This sign at a Los Angeles rally refers to many Armenians' belief that Russia interferes in their country's affairs. (Twitter: @S_Zoppellaro)

YEREVAN, Armenia -- Lines are hardening in the stand-off between Armenian authorities and supporters of a jailed fringe occupation figure who stormed a police station in the capital of Yerevan on July 17.

The danger for the government is that the increasing tension could lead to either side making a mistake that ignites a general uprising.

Authorities shot two of the station occupiers as they patrolled outside the facility on July 26. Later an agreement was reached for the two to be allowed to go to a hospital for treatment.

The shooting further galvanized about 2,000 occupation supporters who have been marching near the station.

The day before the shooting, authorities cut off the dozen occupiers' cellphone service, electricity and food.

The raiders had released the four remaining hostages in the station on July 23 as a gesture of good faith. They initially took seven hostages, but released those who had been wounded.

When the authorities responded to the final hostage releases by trying to starve out the occupiers, the raiders, feeling betrayed, burned three police cars.

On July 26 authorities accused the raiders of firing guns willy nilly in the air outside the station, endangering those living in the area. The raiders' supporters countered that they, not the occupiers, had fired the shots to dramatize their demand that they be allowed to talk to those inside the station.

Also keeping tension high was supporters' refusal to move their demonstrations to an area away from the police station as authorities requested.

The Armenian chapter of Transparency International has jumped into the stand-off by contending that authorities' continuing use of violence against dissent flies in the face of an Armenian commitment to police reform. The agreement was reached between Armenia and the Organization for Security and Cooperation in Europe.

Accusing the authorities of roughing up demonstrators on the streets and in jail during the police-station stand-off, Transparency International called on the rest of the world to stop pouring money in Armenian police reform, saying the effort clearly had failed.

The government has made some conciliatory gestures on the station stand-off, but so far the occupiers and their supporters have refused to bite.

The most important overture was a government assertion that the occupiers could avoid prosecution if they surrendered.

Armenian law allows those who embark on a crime to avoid prosecution by ending it.

The problem with a blanket amnesty is that some of the occupiers killed one of the officers in the station and wounded two.

Can the government really let them walk away from the occupation without being charged?

The occupiers tried to help their case for a blanket amnesty by contending that the officer who was killed was shot by accident rather than intentionally.

The other overture the government has made to the occupiers came from President Serzh Sargsyan himself.

He offered to meet with the man the occupiers want released -- Jirair Sefilian -- about how the stand-off can be resolved without additional bloodshed.

The men who took the station did so to try to force the government to release Sefilian, head of the small opposition political group Founding Parliament, whom the authorities jailed last month on allegations of planning a coup.

In addition to Seflian's release, the raiders have demanded Sargsyan's resignation.

Seflian, who fought in the war between Nagorno Karabakh separatists and Azerbaijan from 1990 to 1994, has been unhappy about Sargsyan's response to a renewal of the conflict this year.

He's particularly incensed that Sargsyan has refused to commit to retaking small slices of territory that Azerbaijan reclaimed during a flare-up in the fighting in April.

The Nagorno-Kazabakh war started when the mostly ethnic Armenians in the territory declared their independence and neighboring Azerbaijan objected because it considers the enclave its territory. Armenia has always supported the separatists.

Seflian has also objected to Sargsyan cooperating with Russian President Vladimir Putin's bid to forge a new Nagorno-Karabakh truce between Armenia, Azerbaijan and the separatists.

Sefilian, who served 18 months in prison on a weapons charge in 2007 and 2008, has called openly for an overthrow of the Sargsyan government.

Although he commands a relatively small group of followers, many Armenians who have dismissed him as a fringe politician have been sympathetic to the occupiers and their supporters for standing up to a government they see as corrupt and unresponsive.

The release of the remaining hostages has shifted the leverage in the station stand-off from the occupiers to the authorities.

But it's still a very dangerous situation. One wrong move on either side could provoke a much larger confrontation.