Somewhere in the thicket of Macondray Lane, a fairy lost its wings.

Mr. Maupin is, to me, our original literary hero. His iconic Tales of the City series, a magical romp through 1970s SF, transcends the generations of readers he's inspired and entertained and taught to love San Francisco as much as he does.

It was through his stories that I, too, came to love San Francisco as much as he does.

Now, after more than 40 years here, he's packing up his Labradoodle and moving to Santa Fe with his husband. (Naturally, they're spending the summer in Provincetown and making a stop at Burning Man before settling down in their new home.)

And I'm staying in town, left with nothing but a stack of his dusty books from the Chinatown library, five years' worth of late fees, and dozens of unanswered interview requests to both his agent and his personal email address.

When my best friend and I moved here in 2007, fresh out of college and wide-eyed at our alien, enchanting surroundings, we decided to book-club all six of his original novels.

From our shoebox apartment above Golden Boy Pizza, we devoured his writing, discussed it obsessively, retraced the steps of the main characters from the Searchlight Market to Club Fugazi to that endless line that still snakes around the corner of Mama's and all the way out to the Sutro ruins.

Our favorite place to perch and stare idly down at the Bay became the top of the rickety staircase where Leavenworth meets Macondray, Mr. Maupin's inspiration for Barbary Lane, where his heroes lived in a ramshackle house run by the prolific Anna Madrigal.

I was Mary Ann Singleton, the wayward and yet surprisingly resilient protagonist, chasing a career at all costs. He was Michael "Mouse" Tolliver, my loyal sidekick. We'd breathlessly reference scenes from the stories in our everyday life.

"Should we eat these sandwiches at that spot in Washington Square where Anna first met Edgar?"

"Stay out of the Broadway Tunnel. That's where Beauchamp Day met his fate!"

"Don't sleep with him, Mary Ann. Didn't you learn anything? He's probably gay."

Tales of the City unlocked San Francisco for me before I could unlock it for myself.

Mouse eventually lost Mary Ann to a career in Manhattan, just like I lost my own Mouse to law school in Brooklyn, and San Francisco is losing a legend to Santa Fe.

But our friendship, like Mary Ann and Mouse's, is far greater than the distance between us. Hopefully so is Maupin's San Francisco -- he already has a new Tales book in the works.

In the mean time, fellow fans can appease themselves by clicking through our ultimate Tales of the City tour of SF below.

And if you haven't read the series yet, get the eff over to your nearest library immediately. (Just not the one in Chinatown. To the really nice librarian who helped me out that day: I promise to return them eventually. I'm really sorry. Really.)

Good luck on your next chapter, Mr. Maupin. Your city misses you already.

Armistead Maupin Is Leaving San Francisco: Our City Just Lost A Legend (PHOTOS)
The &#039;Tales Of The City&#039; Tour 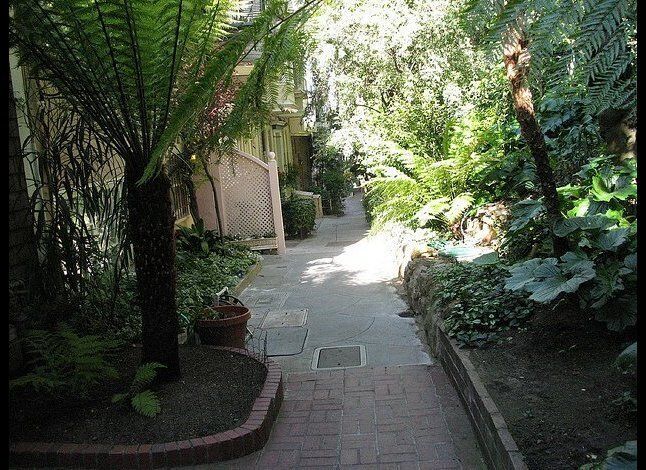 1 / 21
Macondray Lane (Barbary Lane)
"The house was on Barbary Lane, a narrow, wooded walk-way off Leavenworth between Union and Filbert. It was a well-weathered, three-story structure made of brown shingles. It made Mary Ann think of an old bear with bits of foliage caught in its fur. She liked it instantly." -<em>Tales of the City</em>
Flickr: Gary Soup