This year marks the 95th anniversary of Armistice Day. On the 11th hour of the 11th day of the 11th month of 1918 an armistice was signed by the Germans and Allies to stop the trench warfare on the Western Front. In countries around the world, people pause at 11 a.m. for a few moments of silence to remember the millions who died in World War I. It wasn't completely over that November 11th, and fighting continued on the Eastern Front, but it was the end in that part of hell.

We called it Armistice Day too until 1954 when, after a determined campaign by Al King (an Emporia, Kansas, shoe store owner), Congress amended the name to Veterans Day. It started as "a day to be dedicated to the cause of world peace" (or so read the congressional resolution). But, now, in the U.S., it's a day to honor veterans, more patriotic in tone than 'world peace' focused. 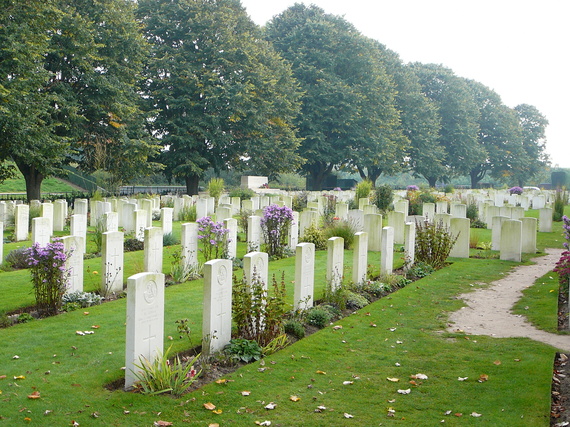 Ieper and the Ypres Salient:

You drive through the Menin Gate to enter the city of Ieper. It's a magnificent gate, with vaulted domes and marble walls. It feels almost disproportionate for this city of twisting cobblestone streets and bike-riding people. But it needed to be big, as it is engraved with the names of 54,896 soldiers of the Great War whose remains were never found.

Ieper is in Flanders, the Flemish-speaking part of Belgium. Pronounced "e-per," with a slightly guttural roll of the 'r' at the end, it's spelled 'Ypres' in French. It was a medieval city, and a walk in any direction is an architectural stroll through the centuries: gothic gables to ornate guild houses, churches to ramparts, historical sites to museums. In the Grote Markt are restaurants and cafes with expansive outdoor patios.

Charming and unpretentious, Ieper looks and feels intact, untouched by time. But Ieper was at the epicenter of the Western Front. Thousands of Allied soldiers walked through its gate to fight and die in the trenches. The city itself was pounded to rubble. After the war, its displaced residents returned and tenaciously, meticulously, rebuilt.

The Ypres Salient is the name given the curving defensive lines of the Allied forces on the Western Front. It is hard now to imagine a war without movement, with opposing forces literally 'entrenched' in mud and where gains were measured in mere yards. Four years of grinding warfare, of unrelenting artillery and shelling...

Now one can drive the length and breadth of the battle lines in one afternoon. There are 170 cemeteries around Ieper, from the row-on-row of white crosses of Tyne Cot Cemetery in Passchendaele, the impressive American Flanders Field Cemetery and Memorial outside Waregem, the museum at Hill 62 and Sanctuary Wood to the ubiquitous clusters of crosses in what appears to be someone's backyard. Cows graze in adjacent fields, crisscrossed by walking and cycle paths.

Essex Farm Cemetery, just one example, is the site of a medical 'advanced dressing station,' where triage meant sorting out who had some chance of survival, and then watching the rest as they died. It was here that Dr. John McCrae wrote his much loved poem "In Flanders Fields." Enter the bunkers, and, you will, within seconds, feel claustrophobic. It's as if the very walls still hold the memory of unbearable pain.

Here is where the Germans introduced gas warfare. Chlorine gas at first, later mustard gas, primitive but agonizingly effective. Before gas masks, soldiers were told to piss on their handkerchiefs and hold it to their mouth and nose. A bullet to the head was considered a blessing compared to the gas. 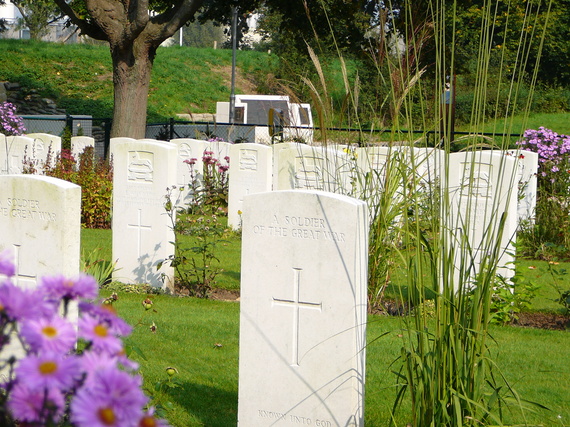 One cannot go to Ieper without attending the Last Post.

The Last Post ceremony is a ritual of remembrance for the fallen of World War I. It has been held every night at 8 p.m. at the Menin Gate since 1928 (with the exception of 1940-1944). Yes, every night... in bitter cold and snow as well as on warm summer nights, for a handful of people or pressing crowds. After the buglers play the Last Post, there is an exhortation, a few moments of silence, the playing of reveille, and the wail of the bagpipers lament. The buglers are local firefighters, all volunteers. The name, the Last Post, refers to the traditional salute to the fallen warrior. It honors those who "stood firm and did not count the cost."

Every cemetery has a story, as does every cross.

And while it sounds like it would be terrifically depressing to visit, it isn't.

It's a privilege to be allowed to bear witness.