This article originally appeared on artnet News. By Brian Boucher 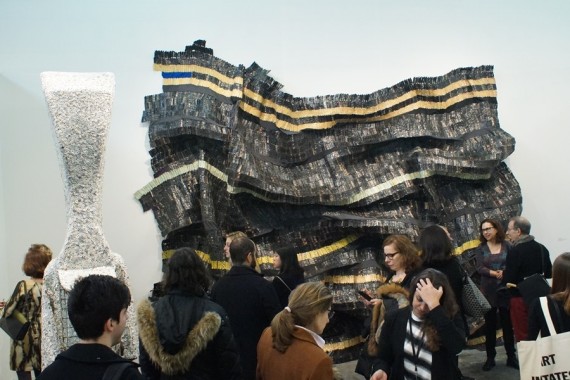 The VIPs were out in force at the preview of the Armory Show on the Hudson Piers on Wednesday. We spotted Neil Patrick Harris, fresh off his Oscars hosting performance, chatting with none other than George Lucas in the aisles. REM's Michael Stipe was seen picking up lunch with Bill Arning, director at the Contemporary Arts Museum Houston, and some other friends. Museum directors like Glenn Lowry were on the prowl.

Nearly 200 galleries from around the globe are offering their wares. We took a quick run through Pier 94, where the contemporary galleries are, and found 10 works we especially liked. (Ben Davis has this to say about the show: Less Neon, More Dead Animals at the Sprawling, Exciting Armory Show 2015.)

Aiko Hachisuka's large sculpture Couch caught our eye at Eleven Rivington (New York). It's a large, comfy-looking couch covered with stuffed clothes, all bought at a yard sale from a single family. It brings to mind Mike Kelley's work with stuffed toys, as well as Yayoi Kusama's furniture sculptures covered with soft phallus shapes. The gallery's Augusto Arbizo (see 14 Young New York Art Dealers To Watch) points out that it's actually more closely inspired by early works by John Chamberlain. By the time we got back to the office, it had sold to someone for $20,000. Only that person will get to sit on it, so don't try to sit down.

An array of ceramic sculptures by William J. O'Brien, each on a custom-designed stand, makes for a dramatic presentation at Marianne Boesky's booth. The Ohio-born artist lives in Chicago and he's 37. These zany sculptures in all sorts of colors dominate the booth to great effect, each standing a couple of feet high. Some depict partial figures, some are angular and abstracts, some show crazy heads. In one, showing a figure from thighs to elbows, the hands sport fingernail polish.

I don't know the work of German artist Michael Müller yet, but you can't help but be drawn into the stand of Aanant & Zoo/Thomas Schulte, in town from Berlin. The artist has lined the floor with pink carpet and the pink wall with text of his own writing. There are sculptures throughout the booth, including a creepy one showing a man sitting in a shower stall, with nothing where his genitals should be. Another, Relaunch at the Museum Shop, has an aluminum cut-out of German artist Albrecht Dürer atop a plinth, with a Louis Vuitton–style handbag emblazoned with the artist's own logo of a D nestled within an A.

I can't get enough of Martin Wong. His painting Iglesia Pentecostal, 1986, shows the whitewashed façade of a church on Avenue B on New York's Lower East Side, with the metal security gates closed. Wong, a Chinese-American artist who died from AIDS, has been deservedly in the spotlight in recent years, with the Museum of the City of New York mounting a show of his street art collection and Danh Vō devoting his Hugo Boss Prize show at the Guggenheim to a display of other items Wong collected. This painting, to me, delightfully plays with the notion of a flat picture plane and of shutting the viewer out, while depicting a bombed-out Lower East Side that's unimaginable today. It's showing at P.P.O.W Gallery, New York.

Edge of Arabia Projects (EOA), London, hosts an endearing project by artist Darvish Fakhr, who is dressed in a flowing garment and a fez, like a whirling dervish (yes, his name has the same root), and is riding a magic carpet around the fair. It sits atop a motorized device and, echoing the motor's sound, is called Whirring Dervish. He won't be hard to find. Just watch for everyone smiling and directing their iPhones his way as he cruises by. On a break at EOA's booth in the Focus section, devoted to galleries from the Middle East, North Africa and the Mediterranean, he told me he hopes to lighten things up and deal with a troubled part of the world with some humor. When I asked if I could try it out, he said, “I don't know, can you ride longboard?"

London's Moving Museum, one of the nonprofits accorded a tiny booth, introduced me to a fine project by Soheila Sokhanvari, an Iranian artist who somehow managed to smuggle some crude oil out of Iran. She used the substance to create monochromatic drawings based on photographs from pre-revolutionary Iran. The works couldn't be more timely, with Iran's nuclear capabilities on the front page as Israel's Benjamin Netanyahu was invited by Congressional Republicans to give a campaign speech in Congress this week, slamming Obama's still-in-negotiations arms deal.

Ryan Gander has a fine sculpture at Berlin's Johnen Galerie that gooses Donald Judd, which can only be a good thing. He's arranged a series of IKEA shelves in a column, just like Judd's iconic “stack" sculptures. Atop them rests a potted plant, as if to turn some of the most beloved exemplars of minimalism into nothing more than interior decor. (It reminded me of a fine piece by David Scanavino at Marlborough recently that similarly tweaked the famously prickly artist by treating his chairs in ways that probably wouldn't have pleased him.)

Wael Shawky's drawings at Lisson Gallery (London, Milan, and soon New York) are a delight. He's shot a series of videos that use marionettes to tell the tale of the Crusades, as he puts it, from the Arabs' perspective; they're now on view at MoMA PS1 (see Puppet Jihad at MoMA PS1 Puts Burlesque Into Extremism), along with the marionettes. The drawings are subtler, but the fancy that infuses the puppets and the videos is also on display here.

Nara Roesler, with galleries in São Paulo and Rio de Janeiro, has a great sculpture by Julio Le Parc, with hundreds of little yellow panes of plastic hanging in a giant globe from the ceiling, making a mesmerizing avant-garde sun in the fluorescent-lit gilded trenches of the piers. The artist, born in 1928, has been showing at biennials since Venice in 1966 and São Paulo the following year, and has stood up to repressive military regimes in Brazil and participated in collective artistic acts of protest against fascist movements in Chile, El Salvador, and Nicaragua.

El Anatsui has received plaudits for institutional solo shows like the recent one at the Brooklyn Museum, which opens soon at the Museum of Contemporary Art San Diego. A giant wall hanging at Jack Shainman's booth is tagged at $1.5 million and incorporates hundreds of aluminum remnants from liquor bottles to create a great, swirling black curtain. (See El Anatsui's Exciting New Work Is Even More Majestic Than Ever.) Roberta Smith, in the New York Times, once wrote of his sculptures, “Their drapes and folds have a voluptuous sculptural presence, but also an undeniably glamorous bravado." That bravado is on plentiful display here. 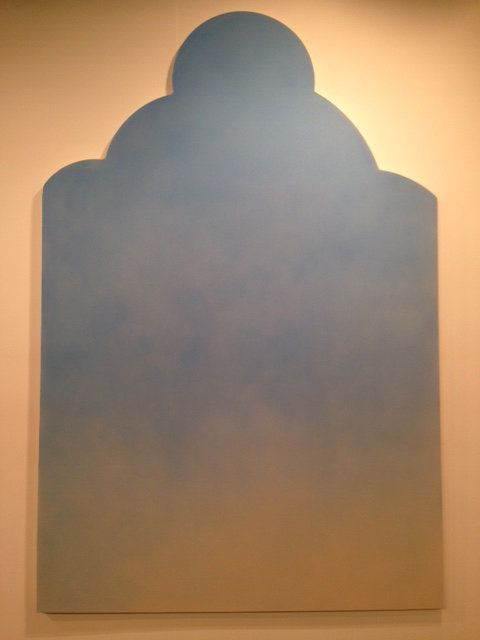