In a shocking but not entirely surprising move, given increasingly violent confrontations near the Oceti Sakowin Camp, The United States Army Corps of Engineers (USACE) has issued what amounts to an eviction notice to Tribal Chairman Dave Archambault. In an email dated November 25, District Commander John W. Henderson says that safety is a priority, among other concerns, and that the portion of the Corps-managed federal property north of the Cannonball River will be closed to all public use and access effective December 5, 2016. A "free-speech" zone will be allowed south of the river.

"This decision is necessary to protect the general public from the violent confrontations between protestors and law enforcement officials that have occurred in this area, and to prevent death, illness, or serious injury to inhabitants of encampments due to the harsh North Dakota winter conditions, Henderson wrote. "The necessary emergency, medical, and fire response services, law enforcement, or sustainable facilities to protect people from these conditions on this property cannot be provided."

In reply, Tribal Chairman Archambault again called on President Barack Obama and Federal officials to intercede and once and for all deny access and permitting under Lake Oahe.

"It is both unfortunate and disrespectful that this announcement comes the day after this country celebrates Thanksgiving--a historic exchange of goodwill between Native Americans and the first immigrants from Europe," Archambault said.

"Although the news is saddening, it is not at all surprising given the last 500 years of the mistreatment of our people. The Standing Rock Sioux Tribe stands united with more than 300 tribal nations and the water protectors who are here peacefully protesting the Dakota access pipeline to bolster indigenous people's rights," he added.

"We continue to fight for these rights, which continue to be eroded. Although we have suffered much, we still have hope that the President will act on his commitment to close the chapter of broken promises to our people and especially our children." 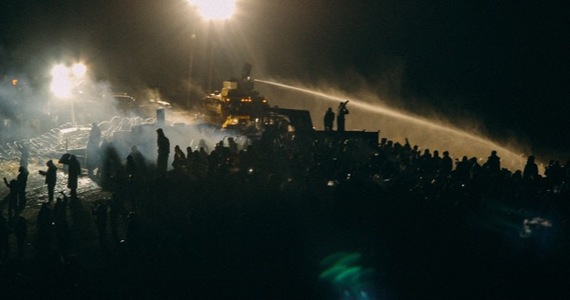 In recent weeks, confrontations between water protectors and law enforcement officials from Morton County North Dakota have resulted in the deaths of two horses, eye injuries, pulmonary injuries from rubber bullets, hypothermia from water cannons used in frigid conditions and the near-loss of an arm.

National media has been mostly silent on these injuries until a New York woman, Sophia Wilansky, suffered a massive blast trauma injury to her arm last week. On Sunday November 20, 400 protesters and police had a violent confrontation on a bridge closed by authorities, effectively blocking access to the Dakota Access Pipeline construction project. Wilansky's injury is the most significant to date in the nearly six-month long standoff at Standing Rock, N.D.

Her father, Wayne Wilansky, told reporters gathered in Minneapolis that his daughter may need as many as 20 surgeries to possibly save her arm and hand. However the prognosis looks grim at this writing.

Standing Rock resident Vanessa Dundon suffered a severed retina after law enforcement shot her in the face with a tear gas canister, according to reports from Oceti Sakowin.

The fingers of blame are pointing in all directions. Protesters say police threw a concussion grenade that hit 21-year-old Wilansky and caused her injury. The Morton County Sheriff's Department says that they were not using that equipment the night of the incident. NPR has a good analysis here.

Confrontations increased after Energy Transfer Partners issued a statement on November 8, 2016 declaring that the Dakota Access Pipeline has not voluntarily agreed to halt construction of the pipeline in North Dakota. "Dakota Access has now completed construction of the pipeline on each side of Lake Oahe and is currently mobilizing horizontal drilling equipment to the drill box site in preparation for the tunneling under Lake Oahe." Dakota Access maintains it has all other regulatory approvals and land rights to complete the crossing of the Missouri River at Lake Oahe.

However the USACE has vigorously opposed this stance, and is battling the issue out in District Court in Washington, DC.

This audio recording is instructive and supports claims of the Standing Rock Sioux Tribe that they had not been consulted during the development of the pipeline project.

The announcement from the USACE comes several days before a group of Veterans planned to join the water protectors at Standing Rock.

The $3.7 billion pipeline, 1200-mile pipeline would carry 470,000 barrels of crude oil a day through North Dakota, South Dakota, Iowa and Illinois. Already the construction has destroyed culturally significant sacred lands. If completed, the Standing Rock Sioux Tribe maintains that it would jeopardize clean water for generations to come.