There is a big difference between a government cover up and news spin. The former is a strategic plan to prevent a scandal from going public. Think about Watergate, which concerned hundreds of illegal actions on the part of the Nixon administration to cover up a burglary which involved government espionage. Public Relations spin, on the other hand, is what politicians, corporations, and the government do on a daily basis to convince you, the public, to see the world through their interpretive lens. Spin may be disingenuous, it may be manipulative, and it may shade the moral truth, but it is not illegal. Something happened in New Orleans yesterday that certainly involves spin. When Sandy Rosenthal of the citizen and watchdog group Levees.org discovered that the New Orleans U.S. Army Corps of Engineers hired consultant PR firm Outreach Process Partners (OPP) to fine tune its public image to the tune of $1 million and posted a link to their campaign, the OPP website morphed to a new version within four hours. They basically "spun" their own credentials to look, well, less manipulative of public opinion. 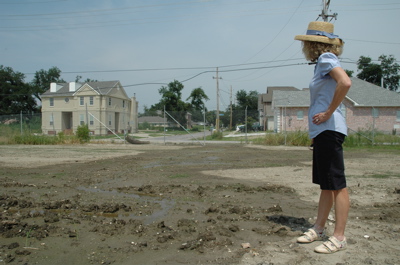 Here is a look at the information presented on the original web page at 3:30 pm CST:

The Corps of Engineers has endured intense scrutiny in the aftermath of hurricanes Katrina and Rita. In the face of adversity, OPP has worked arduously alongside the exceptional team of government personnel to deliver the Corps' message of rebuilding the Southeast Louisiana system quickly, safely and to a higher standard.

Media Support: OPP provides media support for print, broadcast and Internet media on local, national and international levels including outlets such as the Times-Picayune, WWL-TV CBS New Orleans, Associated Press, USA Today, The Weather Channel, The Today Show, French TV Channel 5, and Engineering News Record on issues such as Hurricane Gustav, "paper in the floodwalls" and other investigative responses, seepage, peer review and the state of the hurricane and storm damage risk reduction system. As part of this cause, OPP fosters strategic relationships with media outlets that result in more accurate and balanced stories.

Interviews: OPP has facilitated a myriad of interviews about the rebuilding of hurricane system levees and interim risk reduction structures. Our team members have facilitated in-depth interviews with producers and hosts of The History Channel and MTV. 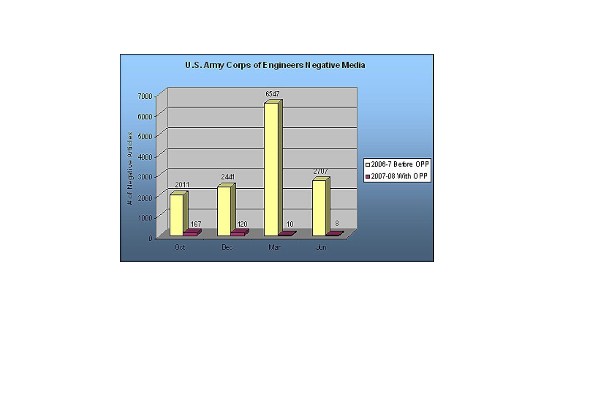 Results: OPP's media support has been a fundamental part of the transition from typically negative news coverage to more neutral and positive news coverage. This effort has also resulted in multiple awards including: The Corps of Engineers was selected for a 2009 Blue Pencil and Gold Screen Award for their work on the Bonnet Carre Spillway Opening OPP was selected for a New Orleans Chapter PRSA 2008 Award of Merit

Here is the web page at 7:00 PM CST after the criticism from levees.org:

The Corps of Engineers has endured intense scrutiny in the aftermath of hurricanes Katrina and Rita. In the face of adversity, OPP has worked arduously alongside the exceptional team of government personnel to deliver the Corps' message of rebuilding the Southeast Louisiana system quickly, safely and to a higher standard. OPP's assistance is geared toward helping the Corps answer stakeholder and media queries that involve technical information in a format that is available and accessible to a non-technical audience.

Results: OPP's media support has resulted in multiple awards including:
The Corps of Engineers was selected for a 2009 Blue Pencil and Gold Screen Award for their work on the Bonnet Carre Spillway Opening

Anytime the media goes to bed with a firm that "fosters strategic relationships with media outlets that result in more accurate and balanced stories," you just have to wonder. Fair media does not require a "strategic relationship" with a PR firm to accurately cover a story. It takes legwork, some phone calls at the minimum, and sometimes days or weeks of research. Unfortunately for the taxpayers and the citizens of New Orleans, government agencies are forbidden by law to lobby the government, but there is no restriction on hiring public relations firms. This puts the onus squarely on the backs of media to really do their job and find the truth.

Researchers at the Center For Public Integrity have compiled a database that demonstrates the amount of traffic going through the door to the Army Corps of Engineers, and the potential for abuse of power these lobbyists wield over the U.S. Government.

According to the Center, between 1998 and 2004, 598 companies lobbied the USACE. In 2004 alone, the number was 234. The Center's electronic database includes the amount of money paid by lobbyists, specific issues, the agencies they lobbied, and who paid them to do so. The USACE list can be found here.

Rosenthal asks the reasonable question: "Shouldn't the Corps focus on repairing levees instead of their reputation?" She also is concerned that OPP provides support for print, broadcast and Internet media including the Times-Picayune, WWL-TV CBS New Orleans, Associated Press, USA Today, The Weather Channel and The Today Show. These media outlets provide much if not all of the coverage of the USACE in New Orleans. The Times Picayune and WWL represent local print and broadcast capabilities that national media often rely upon, especially in the event of disasters such as Hurricane Katrina.

We took a look at this issue last year when disinformation played out in mainstream newspapers, radio networks, and internet sites as spin doctors acted as apologists for the U.S. Army Corps of Engineers (USACE) during the devastating Midwest floods. S&C Advertising was caught red handed on its own website with a testimonial from Kevin Quinn, Chief Public Affairs Office, U.S. Army Corps of Engineers-Omaha District.

"How these [public relations] professionals can transform masters of techno-babble into credible spokespersons so quickly and smoothly is an amazing thing to behold," Quinn said in remarks which have since vanished from the link we supplied in last year's post.

It is hard to believe that the USACE would make the same PR mistake twice, but the speed in which the OPP website was changed makes one wonder. Whatever happened to just telling the truth? If OPP made a PR blunder, just say so and don't begin a process of deleting content from webpages. This begins to look, smell and feel like a cover-up.

We called the national office of OPP for a statement-- twice--and were directed to two numbers in New Orleans. The spokeswomen were not available or were not in to take any calls. We left messages.

Ken Holder, Chief of Public Affairs for the NOLA USACE, was easy to reach--twice--and immediately returned our phone calls. Holder has been on the job for a little over two weeks. He told us he was going to check out how much of that $1 million is actually coming out of NOLA USACE coffers, and is in the process of "reviewing" any and all mentions of USACE on the OPP website.

Holder knows this could morph into a public relations nightmare for the Corps. He did not say that, but he is good at his job and handled questions like he is paid to do. Obviously Holder inherited this problem and wants to fix it.

"We use OPP get public input through public meetings. We have a message we want to get out to local residents and we need a way to compile their feedback," Holder said.

What about the media ties?

"Basically there has to be a way for a government agency to interact with media."

Last year the USACE said it utilized PR firms to "turn babblers" into spokespersons. It might be easier and more cost effective to engage the citizens of New Orleans in honest, open and candid dialogue without media filter and spin provided by public relations firms.

Holder is new. He's a PR guy, but he is also a member of the USACE. He's walking a fine line, but it could be the time to get to the bottom of the OPP matter and wipe the public relations' slate clean. New Orleans has been through too much, too often, and deserves some honest answers.