On November 13, the Army's United States Pacific Command put out an article titled "Pacific Soldiers Create Warrior Training Center at Fort Shafter." Accompanying the article were four photos, the first of which was the sign outside of the facility -- a nice big sign sporting the image of a Christian crusader knight. 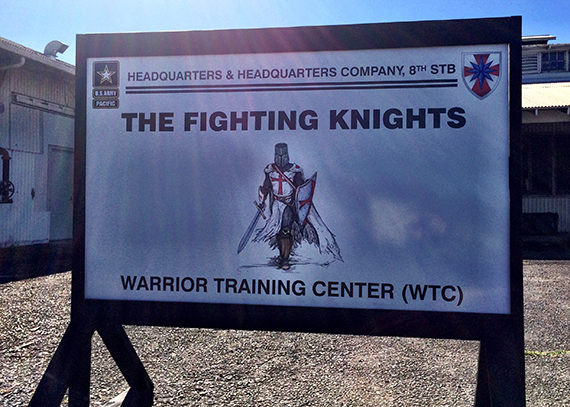 The article, complete with the image of the Christian crusader sign, was subsequently tweeted by the United States Pacific Command (which has 95,900 twitter followers) on November 14, just hours after the attacks in Paris, and by Major General Edward F. Dorman III, the commanding general of the 8th Theater Sustainment Command at Fort Shafter, on November 15, the day after the attacks. 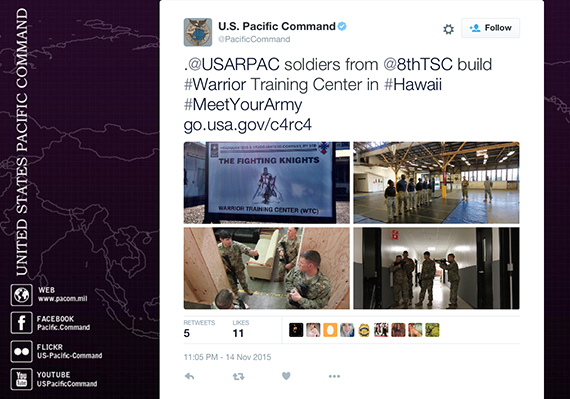 Now, just having this Christian crusader imagery on a sign outside of a U.S. Military training facility is bad enough. Innumerable service members -- both Christian and non-Christian -- find the use of this holy war, crusader imagery by the military that they are a part of to be completely repulsive. But, worse than that, it is dangerous.

As Military.com reported in the first of two articles about this crusader sign at Fort Shafter's Warrior Training Center:

In numerous statements over social media, including Twitter, the Islamic State in Iraq and Syria, or ISIS, has referenced the U.S. and western allies engaged in operations across the Middle East as "Crusaders."

Following the attacks on several civilian venues in Paris on Friday night, which killed nearly 130 and left more than 300 wounded or injured, ISIS released a video threatening attacks on other Western cities, including Washington, D.C.

"We say to the states that take part in the crusader campaign that, by God, you will have a day, God willing, like France's and by God, as we struck France in the centre of its abode in Paris, then we swear that we will strike America at its centre in Washington," an ISIS spokesman said in the video, according to various media reports.

So, yeah, you geniuses at the U.S. Pacific Command, let's send the message far and wide to all of our Islamic extremist enemies out there that our Army's new Warrior Training Center is training our warriors to be Christian crusaders! Very smart. And, by all means, let's do it right after a massive attack by Islamic extremists who are vowing to strike more "crusaders." Even smarter!

On November 16, after a demand was sent to Major General Edward F. Dorman by the Military Religious Freedom Foundation (MRFF), the Army began scrubbing the image, and ultimately the entire article, from various Army and DoD websites, and the tweets by the Pacific Command and Major General Dorman were deleted. Later that day, the actual sign at Fort Shafter was taken down.

In a follow-up article yesterday reporting that the sign had been removed, Military.com also reported that a spokesperson from the 8th Theater Sustainment Command's public affairs office "went so far as to ask Military.com to remove its article about the sign." And what was the Army's reason for its request that Military.com pull its article? Because it "brings attention to jihadists over a non-issue ... contributing to their agenda"!!! Really? Now they think that an article about their great big Christian crusader sign at an Army Warrior Training Center might contribute to the jihadists' agenda? This didn't occur to them when the Pacific Command put out its own article and image of the Christian crusader sign and tweeted it to its 95,900 Twitter followers? It didn't occur to them when the commanding general of Fort Shafter's 8th Theater Sustainment Command retweeted it the next day? But now the Army wants Military.com to pull its article, paradoxically citing the very same reason that its own article was reported on by Military.com in the first place!

Military.com has not pulled either its original article or its follow-up article, and appears to have no intention of doing so.